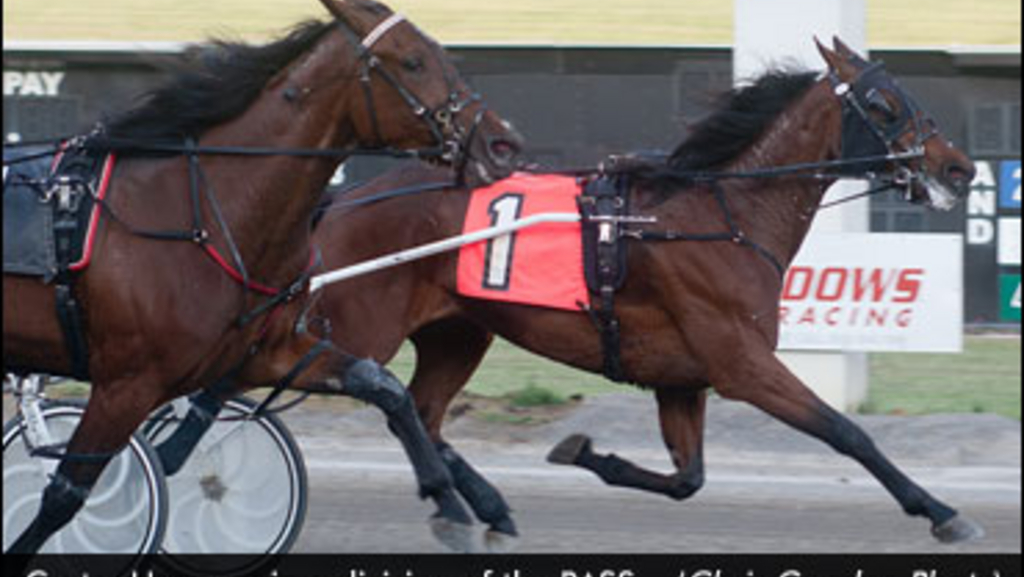 Finding a late seam inside, Curtsy Hanover poured through the Lightning Lane to pull off a 21-1 upset victory in Friday’s $236,320 Pennsylvania Sires Stakes at The Meadows.

The event for three-year-old filly trotters, known as the Stenographer, was contested over four divisions, with Frau Blucher, Mistery Woman and Drink The Wine also taking $59,080 splits. Jim Morrill Jr. enjoyed a stake double behind Curtsy Hanover and Frau Blucher.

Curtsy Hanover had won four of five career starts, but seemed up against it in her first PASS start. After Morrill saved ground with her and knifed inside late, the daughter of Cantab Hall-Chiptease did the rest, out-finishing heavy favourite Defiant Donato to down her by a neck in a stake-fastest 1:54.1. Ruffleshaveridges was third.

“We had problems this spring with her tying up,” said Paul Kelley, who trains Curtsy Hanover, a $40,000 yearling acquisition, for Kelley Racing Stable and Stable 45. “She’s better if I keep her on the farm and out overnight. She’s got some go to her, but she has a lot of catching up to do because she didn’t race last year. The month of July is a little light for her, but she’s paid into everything at the end of the year.”

The 2012 PA champion, Frau Blucher, kicked off her sophomore campaign successfully, firing to the lead from post eight and scoring handily in 1:54.2. Thistle Dhu was second, two lengths back, while Global Beauty earned show.

“She was unbelievable,” Morrill said. “I can’t believe we got the half in :56. She just got there so easy. I shut her down around the last turn and asked her a little bit in the stretch. I think she’s pretty special. She beat them all last year. She came back healthy, she’s sound, she’s a specimen to look at. As long as she stays healthy, I don’t see why she can’t repeat.”

Although David Miller planned to drive Mistery Woman his way, he said the headstrong daughter of Donato Hanover-My Dollys Dream presented him with few options, forcing him to pull at the quarter.

“She was being a little hot,” Miller said. “I didn’t want to come with her, but I would have run over somebody. Luckily, they weren’t going much and I was able to get back to the lead. After last week, we added plugs and a mini-bit, but it didn’t seem to do much good. But she’ll come around. When she gets more racing, she’ll settle down.”

The quarter-pole burst, which made up seven and a half lengths, was the decisive move for the Jonas Czernyson trainee, who defeated Lady Broadway by three-quarters of a length in 1:55.2. Classic Martine completed the ticket. Millstream Inc., Misty Miller, William Donovan and Aldebaran Park Inc. own Mistery Woman.

Making her seasonal debut, Drink The Wine advanced from fifth to win her division by half a length in a career-best 1:55.4, pulling off an 11-1 upset over Upfrontluckycarol and favourite Fashion Athena. The Andover Hall-Naked Lyric filly was driven by Brett Miller for trainer Steven Bryden and Ontario owners Melvin Hartman and R A W Equine Inc.

In the $22,500 Winners Over $10,000 Life/Preferred Handicap Pace, I Found My Beach scored his third straight in a career-best 1:50.4 for Brett Miller, trainer Virgil Morgan Jr. and owner Herres Stable. Object Of Art rallied late from the pocket, but fell a head short, with Martini Twist third. The Mach Three-Ohio Annie gelding now boasts $439,588 in lifetime earnings.