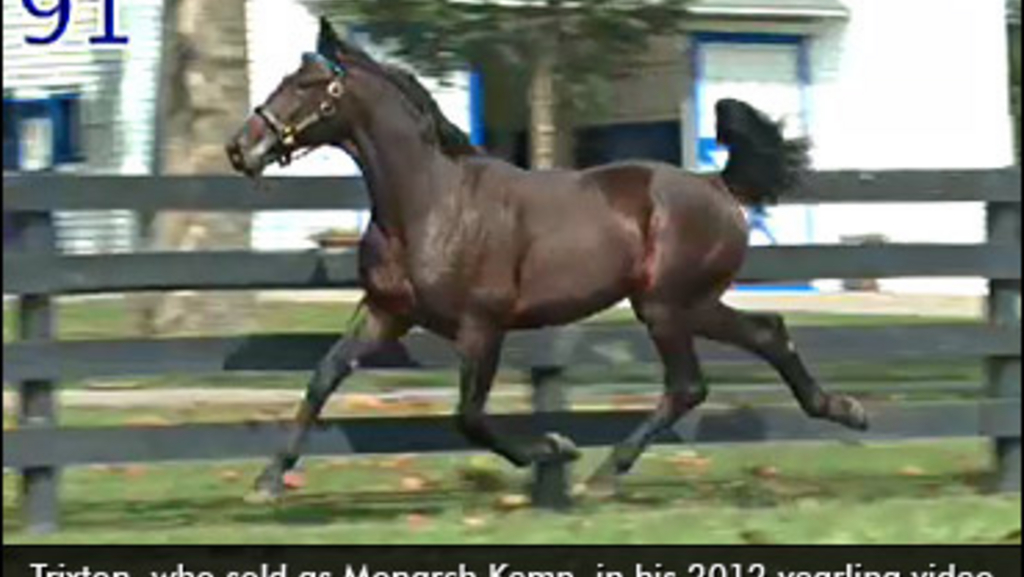 Three-year-old trotters founds themselves in the spotlight Friday evening at The Meadowlands, as the New Jersey oval hosted three divisions of NJSS worth more than $20,000 apiece.

Trixton was the star of the show for trainer/driver Jimmy Takter, who rallied the heavily favoured son of Muscle Hill-Emilie Cas El to a 1:54.2 score in the first division for the colts and geldings.

Sumatra and Lightning Force took turns on the lead through panels of :28.1, :59.2 and 1:27.2 before Takter unleashed the beast. Trixton sprinted home in :26.2 over the sloppy surface and drew clear to win by 4-3/4 lengths over Lightning Force. The show dough was earned by King City.

Sent off as the 1-5 favourite, Trixton improved his 2014 record to 2-1-0 from three trips postward. Brixton Medical Ab of Sweden and Christina Takter of New Jersey share ownership on the six-time winner who bumped his lifetime earnings to $94,583.

Well Built pulled off a 7-2 mini upset in the second division for the male trotters. John Campbell rallied the son of Muscle Hill-Working Girl K to the 1:56.2 score over race favourite Martiniwithmuscle and Muscle Network, who sliced out the panels of :28.2, :58.3 and 1:29 before weakening in deep stretch.

Trainer Chris Ryder co-owns the five-time winner with Robert Mondillo of Delaware, Ohio. It was the second triumph of the season for the career winner of $124,697.

The lone pari-mutuel division for sophomore trotting fillies went to Moonlight In Miami and driver John Campbell in 1:55.2. The daughter of Muscles Yankee-Bedtime Song watched Scully SAS and race favourite Yoga take turns on the lead through intervals of :28, :58.4 and 1:28.2 before sweeping to the lead and eventually the win. She halted the teletimer in 1:55.2 en route to defeating Yoga and Demoiselle Hanover.

My Inspiration trotted her winning mile in 1:57 in a non-wagering event before the betting card.

Yannick Gingras guided the Trond Smedshammer trainee to a length and a quarter tally over Scream And Shout and two and three-quarter lengths ahead of Fastdownthehill.

Libfeld and Katz also own My Inspiration, who had a second and a third in three starts at two and was making her first start at three.

Top class filly and mare pacers went to the post in the 11th race, a $30,000 Free For All Handicap. Shebestingin went to the post as the 2-5 overwhelming favourite and appeared poised for another victory after setting fractions of :28, :55.1 and 1:22.2 at which point she turned for home in front, but she was collared late by the classy Jerseylicious, who rode the pocket every step of the way and tripped the timer in 1:50.1.

In addition, Drop The Ball got back to her winning ways in the Filly and Mare B-1/B-2 Handicap Pace, moving to the lead approaching the half-mile pole and drawing clear the rest of the way to an impressive 1:49.1 victory over the sloppy going. Corey Callahan had a daily double of quality mares tonight.

Racing resumes on Saturday for Roosevelt Raceway Legacy Night with festivities including appearances and an autograph session from Roosevelt drivers, television appearances by Dave Johnson and Spencer Ross, discounted food and beverage items including $1 draft Budweisers and much more.

In addition, the 14-race blockbuster Saturday program includes the $175,000 Arthur J. Cutler Memorial Final featuring the match-up of Swedish World Champion Sebastian K fresh off his world record in the elimination and the American Champion, Market Share. Post time for the Saturday program is 7:15 P.M. Full card simulcasting centres around The Preakness Stakes with gates opening at a special time of 9:30 A.M.