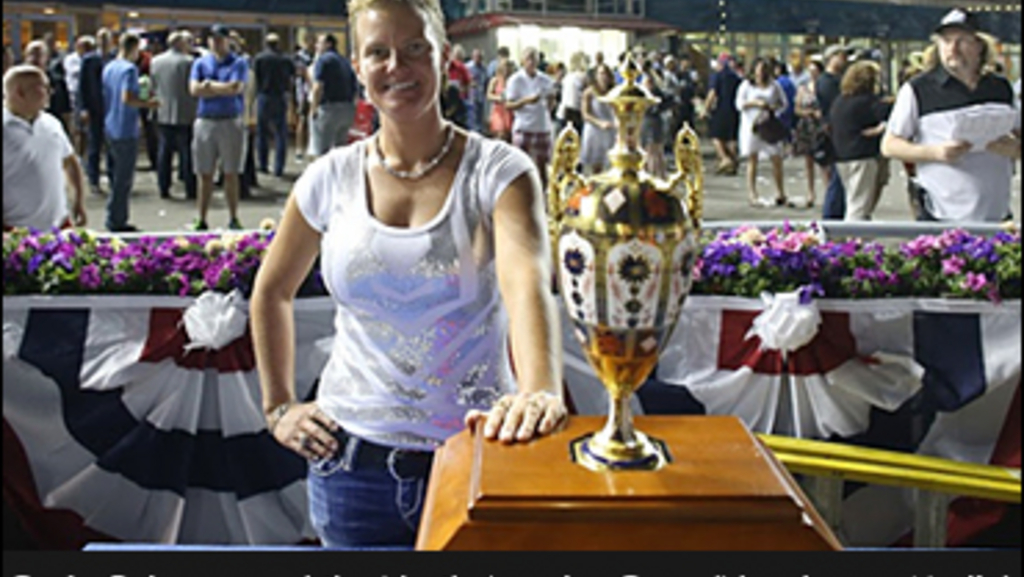 Sunshine Meadows in Florida hosted eight qualifiers on Friday (May 15), and there was plenty of star power in action including a fine-looking roster of three-year-olds from the stable of trainer Casie Coleman.

The Pepsi North America Cup is on the dance card of two of the Glamour Boys who faced the gate this morning for Coleman including Indictable Hanover -- a very talented youngster who didn’t make it to the races as a rookie.

“He kicked a cement wall in the paddock and then knuckled under warming up one morning when he was in to qualify at Mohawk,” Coleman told Trot Insider. “He was lame and I had to scratch him that morning. It took a few weeks to figure out what was wrong and finally, with a bone scan, I found out he had a bad bone bruised in his hind ankle.

“I had to do right by him and kick him out,” she added. “So we missed the whole year with him. I and sent him to Lexington with Beth at Anvil & Lace and she did a great job with him. He was there a long time...he went in July and I picked him up in November. So far, so good.”

Good, indeed. The son of Bettors Delight-Im Sassy snapped home in :27.2 to win convincingly in the fourth qualifier of the morning session, and he impressed his conditioner.

“Indictable is who I think my best colt is, he’s very, very nice. Always has been a top colt,” said Coleman. “He went 1:56 for fun in a wind storm this morning and Brian [Sears] loved him. He did it so easy.

“I’ll go a good mile with him again next weekend and then he will ship home,” she added. “Then I’ll decide if I qualify again or if he’s ready for a maiden race. It all depends on the stakes schedule once new dates are put out.”

Another Pepsi North America Cup hopeful, Examiner Hanover, also got the job done later in the morning session. And like his stablemate, he did everything asked of him.

“Examiner was awesome,” said Coleman. “We didn’t want him on the front today in a head wind, and he was in against a killer four-year-old [American Mercury]. Examiner crawled along early hoping the good one re-took the lead, but he didn’t. Examiner went a big back half and did it easy. He’ll have the same type of schedule as Indictable Hanover will have going forward.”

Reagan Blue Chip, though no longer eligible to the Pepsi North America Cup, was a powerful winner in 1:55.2 for Sears and Coleman.

“I took Reagan out of the Cup and wish I didn’t,” said Coleman. “He was a killer after I gelded him three weeks ago. He’s been fantastic since then.”

A new recruit is on his way to Coleman’s barn on the weekend, and he was an impressive qualifying winner Thursday morning at Pompano Park for trainer Jim MacDonald.

“Ideal Perception is a colt I’ll be getting on Sunday,” said Coleman. “He won his qualifier in 1:56.3 at Pompano. Ed James has the colt paid into the Pepsi North America Cup. They say he’s very nice, but I haven’t met him yet.”

By the looks of it, her barn could be sitting on a big year if all the stars line up.