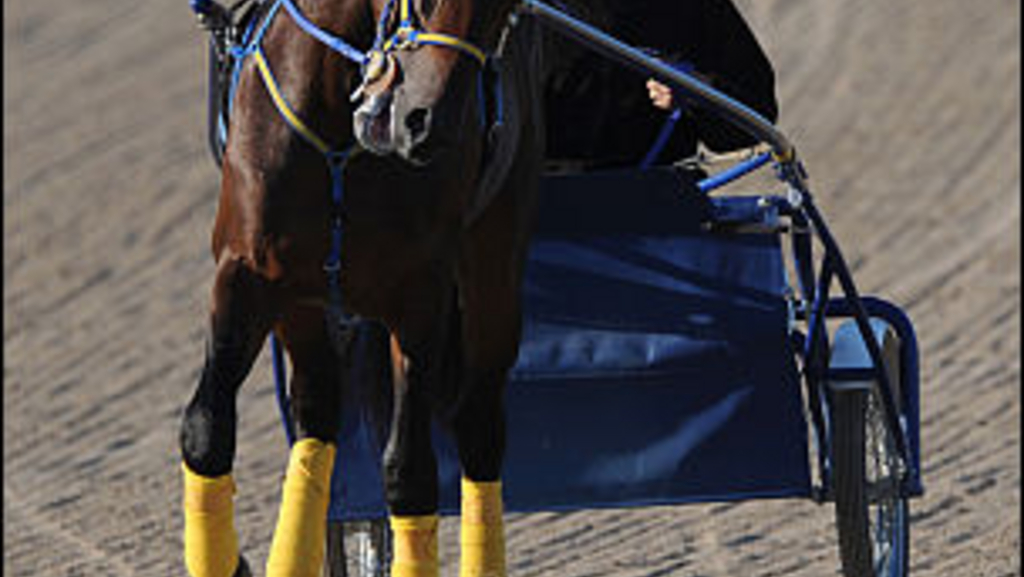 Keen eyes were on both Mohawk Racetrack and the Meadowlands Racetrack this morning, as harness racing newsmakers Sportswriter and Auckland Reactor both qualified victoriously

With the Mohawk track rated 'fast' yet one second slow, the O'Brien Award-winning Sportswriter, who has been gauged as the 3-1 favourite in Trot Magazine's 2010 Pepsi North America Cup Spring Book, put in his second qualifying mile of the season in Race 5, this time for new driver Brian Sears, who was got up behind the son of Artsplace for the first time.

After starting from Post 3, Sears and Sportswriter worked their way into the two hole behind the Dr. Ian Moore-trained and driven Bettors Delight colt Malicious (15-1 in Spring Book), who was putting in his second qualifying effort of the year. Malicious cut the opening quarter in :27.1. Dr. Moore and Malicious geared the tempo down in the second quarter of the dash, as they went on to trip the second timer in :58.4.

Sears called on Sportswriter in the third quarter, as he tipped his charge out of the hole and clicked off the three quarters while overland in 1:29.1. Sears and Sportswriter finished their mile off with increased speed, as the duo came home with a :26.4 final quarter en route to a one-length victory in 1:56. Malicious and Dr. Moore finished second, pacing their final quarter in :26.4 and overall mile in 1:56.1. Affleck, (110-1 in Spring Book) the Blair Burgess-trained son of Real Desire, finished third in Race 5.

"The colt handled well and had good manners," Sears told Trot Insider. "It would have been nice for the fractions to be a little faster, but my intentions were to race him out of a hole, and that we did accomplish. I feel he is still a few races away from being very sharp, but he does feel like a very nice horse."

In a post-race interview with Greg Blanchard of the Woodbine Entertainment Group, Coleman was asked for her assessment of the mile.

"We wanted to go a mile in (1:) 52 or 53 today. When I saw Malicious in here I thought we'd get those wicked fractions; he's usually pretty hot on the front-end I thought. So Brian said before that we'd tuck in behind him and sprint home -- mind you we thought the fractions would go a lot more."

In terms of what the near future holds for Sportswriter, Coleman said that he will be back next week.

"We'll be coming back and qualifying again next Thursday. We can't race off a mile in (1:) 56 -- I could've just left him at home and did that at the training centre. I wasn't really happy with the qualifying mile. It's not [that I was unhappy with] 'Sports.' Sports qualified as good as he could; he was very good, but I was not expecting 1:29.1 to the three quarter pole in a qualifier, that's for sure."

Although the time in which Coleman was looking for Sportswriter to go this morning did not come to fruition, the multiple O'Brien Award-winning trainer explained that she was pleased with her stable star.

"I can't be any happier with Sports. As you can see here he's not blowing out a match. He's was very good, it's just that we could've gone to the front, I guess, but we'll have to come back next Thursday and 'give er' another whirl."

When asked whether or not today's qualifying outcome will throw off Sportswriter's schedule going forward, Coleman explained that she had readier herself for all possible scenarios.

"We were going to enter for a Three-Year-Old Open next week. I didn't think that they would fill it. I was hoping that they would, but we had planned that we'd qualify him for a third time if it (the Open) didn't go. It's not a big deal. Obviously I wanted a faster mile under him today, but listen, I could've stayed at home and done that at the training centre. I wasn't happy with a (1:) 56 mile, but nothing against Sportswriter. So we'll probably have to whack it out ourselves next week."

Blanchard also spoke with Dr. Moore afterward, and the trainer of Malicious shed some light on where he thinks his charge is in terms of health right now.

"He was a little bit flat today," he explained. "I may have come back with him a little too soon. It's actually been 22 days or more since he qualified in Florida. So since that time, to truck up and everything, he really hasn't -- other than jogging -- done a whole lot of training.

"He'll sit down on the front-end, anyway. I did that a bunch last year some times. He didn't seem right into it today like he normally is."

When asked where he will go from here with Malicious, Dr. Moore said it might be up in the air right now.

"I'm not sure. I'll have to think about it today. I may qualify him again, perhaps. It'll depend on how he comes out of this one first and I'll make a decision tomorrow."

Dr. Moore also explained that Malicious did have a health issue last weekend, one in which he thought the colt was over.

"He seemed to recover very quickly. He spiked a bit of a fever there on Saturday and he jogged quite normal Monday, Tuesday, Wednesday, so I don't know. We'll look him over today and go from there."

In terms of Sportswriter's schedule, Dr. Moore said, "Yeah, it'll probably change a bit. I don't know if we will go to New York right away now or not."

A pair of millionaires duked it out earlier on the card, as aged pacers Our Lucky Killean and To Helen Back took to the track for Race 2. After sitting second through the opening quarter, the Mike Saftic-driven and John Pentland-trained To Helen Back made the front before the :58.3 opening half and went on to record a five-length victory in 1:54.3. The seven-year-old Astreos mare came a 56-second back half and a :26.2 final quarter. With Sylvain Filion driving for trainer Tom Deters, nine-year-old Camluck gelding Our Lucky Killean finished second and paced his mile in 1:55.3.

Race 8 saw the Mark MacDonald-driven and Casie Coleman-trained Bay Girl put in her third qualifying effort of the season for trainer Casie Coleman and driver Mark MacDonald. The three-year-old Royal Mattjesty filly was solid again this morning, as she put in a wire-to-wire mile and won by over eight lengths in 1:53.4

Race 10 saw three-year-old Western Terror filly Western Silk put in her third qualifying effort of the season for trainer Casie Coleman and driver Mark MacDonald. After sitting fourth through the opening half, MacDonald and his mount were on the outside at the third call and went on to power off to a four-length victory in 1:54. Three-year-old Grinfromeartoear filly Tiz To Dream also qualified for trainer Gregg McNair and driver Doug McNair in the dash. The filly went to the front in the second quarter and cut the middle fractions. She would end up finishing third and pacing her mile in 1:55.1.

To view the results for the Mohawk qualifying session, click here.

The Meadowlands' qualifying card was the scene of Auckland Reactor's third qualifying effort on North American soil. The six-year-old son of Mach Three contested Race 13. With regular driver Brian Sears at Mohawk qualifying Sportswriter, trainer Kelvin Harrison has listed none other than John Campbell to steer the Down Under star. Auckland Reactor had taken two pocket trips in his previous qualifiers.

Breeders Crown winner and Hambletonian hopeful Pilgrims Taj made his three-year-old charted debut in Race 3. The Monte Gelrod-trained and Mike Lachance-driven Broadway Hall colt sat third through the opening half, but came on in the third quarter of the dash. Up contesting for the lead at the three quarters call, Pilgrims Taj would go on to trot to a two and a half-length win in 1:57.2.

In what was her third qualifying effort of the season for trainer Jimmy Takter and driver Ron Pierce, three-year-old Muscles Yankee filly Costa Rica contested Race 5. After having left from Post 5, Pierce got the filly away fifth. She ended up making a break after the quarter. Pierce got his mount back on gait, but had much room to make up. Costa Rica ended up finishing sixth, as she was beaten 12 lengths. She trotted her mile in 2:00.3. Springtime Volo won the race by five and a half lengths in 1:58.1.

Three-year-old Revenue S colt Break The Bank K was making his seasonal charted debut in Race 6 for his trainer-driver, Trond Smedshammer. After sitting fourth through the opening fractions, Break The Bank K came on in the second half of the mile and trotted off to a four and a quarter-length victory in 1:56.1.

With Dan Dube to be in the bike, four-year-old Western Ideal horse Vintage Master put in his second qualifying mile of the season for trainer Jimmy Takter in Race 9. After sitting fourth through the opening half, Dube sent Vintage Master first over. The duo would finish second and pace their mile in 1:53.3. The winner was four-year-old Bettors Delight geldingGo Go Solano who put in a wire-to-wire effort for driver George Brennan in 1:53.1.

Three-year-old Rocknroll Hanover colt Woodstock (22-1 in Spring Book) contested Race 11 for driver Tim Tetrick and trainer Noel Daley. The mile was the second qualifier of the season for the colt. Tetrick had his charge in third through the opening half and second by the three quarters call. Woodstock was up by one length at the head of the lane and went on to post a four and a half-length victory in 1:53.1 off wicked :25.4 final quarter speed.

In what was his second qualifying mile of the season, three-year-old Cams Card Shark colt All Speed Hanover (6-1 in Spring Book) took part in Race 12 for driver Ron Pierce and trainer Noel Daley. After having been third through the opening half, Pierce had his mount on top by the three quarters. The duo would go on to win by two and a quarter lengths in 1:52. Three-year-old Western Hanover colt We Will See (62-1 in Spring Book) also contested the dash for trainer Sam DePinto and driver George Brennan. In what was his second qualifier of the year, We Will See finished third by two and a half lengths and paced his mile in 1:52.2.

To view the results for the Meadowlands qualifying session, click here.