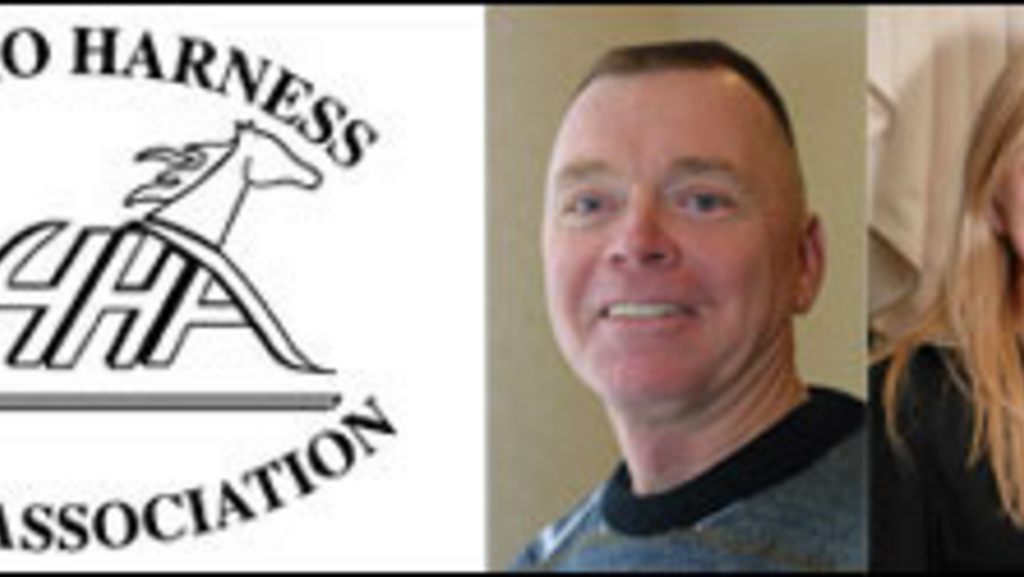 The resignations come in light of Bill O'Donnell's resignation as President.

"It was a pleasure working with the staff at OHHA and having the opportunity to work at making improvements to the harness racing industry," Duncan explained to Trot Insider in a statement. "I want to thank the members who supported me during my time as director."

Belore has asked for her resignation letter to be posted on the SC website:

It is with great regret that effective May 1, 2009, I must resign as a director with the Ontario Harness Horse Association. I still feel strongly that an organization of horsepeople is of utmost importance in this era of Harness Racing but do not believe that the recent steps of O.H.H.A are in the best interests of my fellow horsepeople. I have the greatest respect for Bill O’Donnell and thank him for his hard work and patience over this trying time. I would also like to wish the women of the office all the best and thank them for their co-operation over my time at O.H.H.A.

A letter from Doug Hie also appears below in its entirety, and Trot Insider has also received a letter from John Thomson. Thomson's letter is available here in PDF format.

Effective Thursday April 30, 09. District 3 OHHA Director Doug Hie has resigned his position due to the direction that some of the OHHA Board members have decided to take.

I would like to thank Bill O'Donnell, Yvonne Smits, Cathy Arsenault, Kathie Wilkinson and Stacey Newman for all there help over the past years while serving as a Director.

Also, to all the horse people of District 3, I would like to thank you for allowing me to serve in this position for the past 20 plus years.

My sympathy goes out to the good horsepeople of Ontario.

Something terrible has happened to our organization, the OHHA. Years ago when I was down around American tracks such as Vernon Downs and Saratoga the OHHA was considered to be the model for a horseman's organization.
What caused the shipwreck?
1. Was it about personalities and egoes?
2. Did we back the wrong horse so to speak by paying out large sums of money to lawyers to defend cheats?
3. Should there be term limits on the directors and the president?
4. Does the OHHA actually represent the ideals of the majority of its members?
5. On very important issues, should all members be allowed a vote on concerns such as withholding horses from the entry box and hiring lawyers to challenge WEG's property rights policy?

It would be most helpful if the "Magic Man" would elaborate on his comment that the OHHA is a "shit hole". The perception of the general public and a large number of members of the OHHA is negative.

To change this perception this organization must focus on:

1. the welfare of the horse(supporting fully the new whipping rule and banning steriods would be a good start)

2. what is good for the racing industry itself; we are all in this together and at all times should be acting in good faith; (paying lawyers to defend cheats and settling personal vendettas should not be on this list).

We already have splinter groups breaking away from the OHHA; if we don't get a good dose of common sense soon - will there be anything left to save?

Sounds like a great time for a general meeting with votes on the table on how OHHA should proceed. Obviously an agenda for the self serving is 'standing in the way of real progress'. Ontario has probably the healthiest harness racing on the continent. A Sires Stakes program that is second to none. And, a purse structure that most provinces and American States could only dream of. This OHHA board is acting very much like a loose horse, clearly it's time for the OHHA membership to step forward and take the reins. An organization of this stature should be setting an example for the rest of North America. Instead, horse owners of Ontario are being held up to ridicule.

In reply to The current dilema at OHHA by [email protected]…

Well said, Mr. Millar. Far too many good people have been squeezed out of OHHA or left in frustraion because of the reasons that you have stated. I know that things have gone on at the Board level that the members would not be happy with but we don't hear about most of it unless we start digging. Money that was frivolously spent on legal fees (defending trainers who had infactions of the rules) needless trips, meals and other "perks", etc. that could have been put to better use. I guess we never should have taken it for granted that the people whom we elected to represent us on the Board would do just that rather than serve their own purposes. Those who think and act like they are more powerful than the membership as a whole need to be removed. This happens in all organization but the membership needs to demand that it comes to an end. We need accountability, honesty, better communication, transparency. Most of all, we need to work together to be a organization of horsepeople who are respected for the hardworking, dedicated folk that we are who can work with WEG and other race tracks to ensure that there is a race industry in Ontario for years to come. We are currently on the road to self-destruction!

Well Stated Phil! I agree whole heartedly. As I stated before, we need a general meeting of OHHA, and let the membership decide. We elect our representatives. Now is the time to support them in their stand, if indeed it is the decision of the majority, and just maybe, by exercising our right to vote, we can talk "the Magic Man" into withdrawing his resignation, and continuing on our behalf to negotiate intelligently and with professionalism!

The current dilema at OHHA

The current dilema at OHHA should not be a surprise to anyone in the horse industry and to be truthful, members only have themselves to blame. You were all forewarned 6-7 years ago about how our association was being managed and you all failed to address that situation by continually allowing many of the current directors to be re-elected. These are the same directors that have always banded together in order to serve their own personal adgenda. OHHA members have allowed this to happen, so we all have to live with the cosequences. I served as a director of OHHA for 3 years and it was the most frustrating experience I have ever had. I can fully understand how Bill feels with respect to the vote of non-confidence as many of the current directors spent a great deal of their time and effort trying to have me removed from the board as well. It is truly sad to see that one individual has virtually brought OHHA to its knees and it seems that he will not stop until their is nothing left. If membership really wants a change, show it in November at the next OHHA election and GET SOME REPRESENTATION ON YOUR BOARD THAT TRULY CARES ABOUT THE WELFARE OF HORSEMEN IN ONTARIO!

I cannot believe what has

I cannot believe what has transpired from the Board of Directors meeting at OHHA. Why are there not more postings from horsemen concerning the Board of Directors agreeing to support a lawsuit against WEG for not signing an access form. Why are the members of OHHA allowing one person's personal agenda to be followed? How can the majority of the OHHA board members support a lawsuit, when OHHA in my opinion is operating in a financial deficit? What about the money that was handed out to individuals for lawyer fees, when in fact the board had denied this request? Should the membership not have a vote when or how this money is being spent when it is coming out of the purse account? Is there a general meeting being called? All members of OHHA should be contacting their directors and get all of the facts, STAND UP AND VOICE YOUR OPINION!!!

Hard to figure this OHHA

Hard to figure this OHHA thing. Given the current economic climate, even the UAW have figured out that confrontation is not the way to go. Working with WEG is the only direction that makes any kind of economic sense. Directors need to put their egos aside, forget the past and focus squarely on the future just in case there still is one.

Maybe someone should look at

Maybe someone should look at the funds situation. Why would all these people resign unless there is some shenanigans going on....

Now is the time to

Now is the time to re-evaluate what OHHA stands for.
OHHA is supposed to speak for the membership.
More than ever we need a level headed leader who will convey the proper message and take us in the right direction.
With this mess we are in now there will be a mass exodus of members leave OHHA. I as one will see what the next few days bring, then consider following Billy O down the road of common sense!

Will someone please explain

Will someone please explain what is going on with the OHHA! All these good people must have a sufficient reason to resign. Maybe major changes have to be made. I feel that this might be necessary in order to maintain the highest calibre of racing in North America. Shame on those that allowed this to happen!!!!

As an OHHA member since it's

As an OHHA member since it's inception in the 60's, I would like some sort of explanation of what insurmountable issues caused the resignation of so many members. I do believe as members we are entitled to this. As I am a member in District 3, this is especially crucial, since we are now left with no representation, and would like to believe that every effort was made to resolve the issues before just walking away from the position both Doug Hie and John Thomson ran for and were elected to. Perhaps such serious issues as appear to have caused a stalemate should be put forth to the membership for a vote!

Past OHHA actions have suggested that they were out of touch with reality. This spate of resignations only solidifies the notion that OHHA is in shambles. It is a shame for harness racing in Canada and in North America that such a high profile and apparently healthy provincial industry with such generous purses and healthy sire stakes program could be relegated to the category of laughing stock. Breeders and owners should be scrambling to evaluate their business priorities at this point. This is a sad day for harness racing.