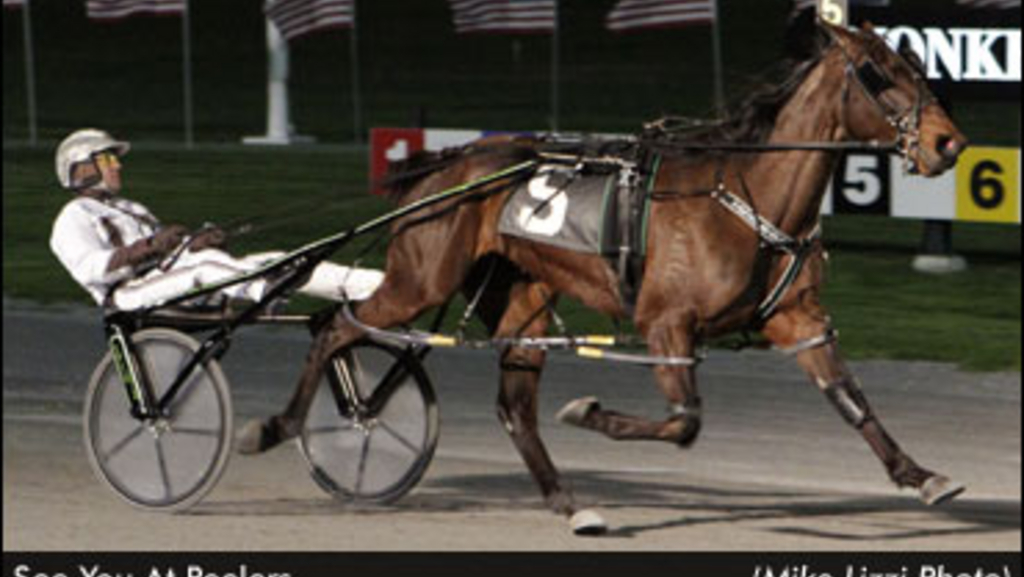 It's like a theme show, with another Yonkers Raceway Ladies Night Friday in the third round of the Blue Chip Matchmaker for Open pacing mares

As was the case in the first two rounds, five $40,000 divisions went postward.

The song remains the same for See You At Peelers (Brian Sears, $2.10), who won her third race in as many series/seasonal starts.

Leaving from post position No. 5 in the fourth division, the people's preference worked around Oceans Motion (George Brennan) before a :27.1 opening quarter-mile. From there, a dawdling :30-second next station (:57.1 half) ended what minimal suspense there may or not have been. From there, a 1:25.2 three-quarters and a 1:52.4 mile resulted in a comfy, two and three-quarter length victory.

The evening's other Matchmakers were summarized as such:

Odds-on favourite Ginger And Fred (Jason Bartlett, $3.40) two-moved to secure the lead, then was a handy, three and three-quarter length winner in 1:53. Fox Valley Sage (Cat Manzi) was a first-up second, with Pancleefandarpels (Mark MacDonald) third.

Ginger And Fred, a six-year-old daughter of Real Artist trained by Ron Burke for co-owners Howard Taylor, Robert Feldman, Edwin Gold and Jerry Silva, is now three-for-11 this season. The exacta paid $11, with the triple returning $40.40.

Series-debuting Lightning Treasure (Brennan, $13.80) sat loosely-pocketed to 1-5 choice Chancey Lady (Tetrick), then rolled by, getting the fave by a half-length in Mystical Diva (Sears) was a best-of-the-rest third.

Lightning Treasure, a seven-year-old daughter of Western Ideal owned by Lightning Stable and trained by Keith Armer, is now two-for-four this season. The exacta paid $21.60, with the triple returning $59.

A first-up Western Silk (Brennan, $3.80) wore down the in-play-early Rocklamation (Sears) by in 1:52.4. Krispy Apple (Tetrick) closed the gap into the first two, but was third nonetheless.

Western Silk, a five-year-old Western Terror miss co-owned by Ross Warriner and Tom Hill and trained by Andrew Harris, is now two-for-three in this series and on the season. The exacta paid $6.30, with the triple returning $11.60.

Anndrovette (Tetrick, $2.10) retook from Symphony In Motion (Sears), rated a :57.3 middle half, then held sway. She defeated Symphony In Motion by in three lengths in 1:53.1, with Hulas Z Tam (Pat Lachance) closing inside for third.

Anndrovette, a five-year-old statebred daughter of Riverboat King co-owned by Bamond Racing and Joe Davino and trained by PJ Fraley, is three-for-six this season. The exacta paid $13.20, with the triple returning $61.50.