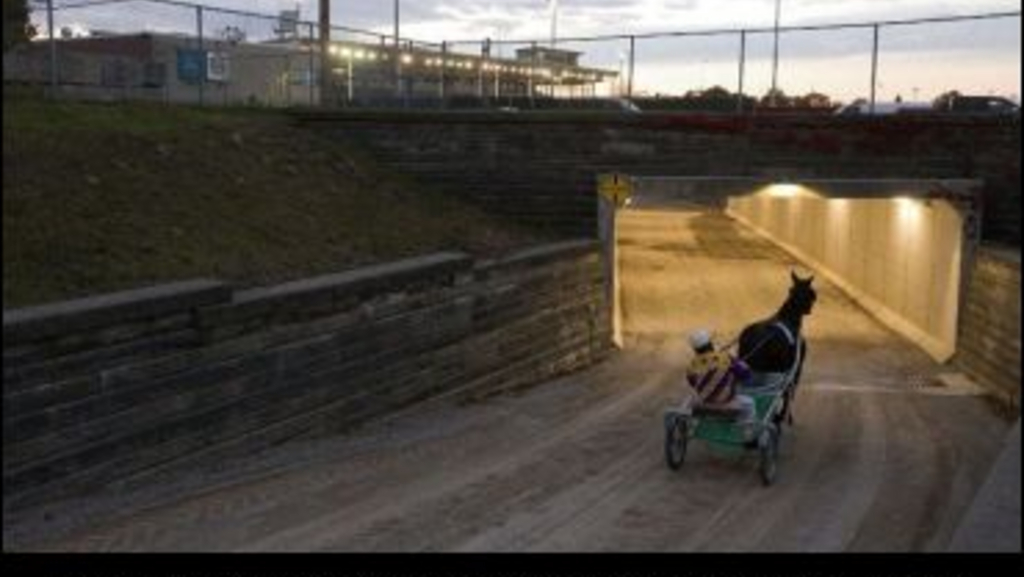 London City Council has approved an upcoming archaeological study for the grounds of Western Fair District, and local historians are confident that the dig will unearth human remains that date back to at least the 1800s.

According to an article by The London Free Press, the need for a field study at the fairgrounds has arisen due to zoning. A zoning change is required in order to set the deck for potential future developments at the Western Fair District. The London Free Press piece did not speculate as to what any potential expansion would or could be.

The archaeological study will focus on the west and south face of the Canada Building and south face of the West Annex and Progress Building, according to the article. The piece states that the dig would take place in the Western Fair parking lots that border King and Dundas streets, which is the site of the former St. Paul’s Anglican cemetery. 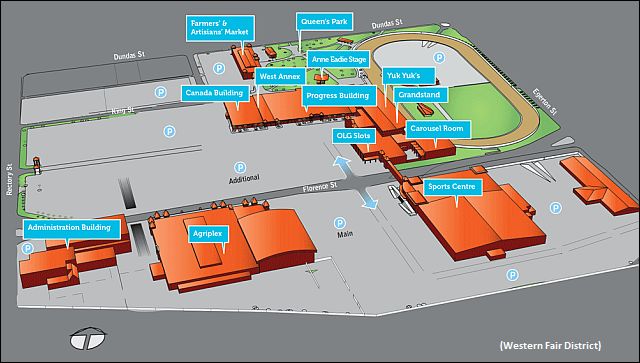 An overview of the layout at the Western Fair District, where the Canada Building, West Annex and Progress Building are some of the highlighted structures.

While citing public information made available by from Timmins Martelle Heritage Consultants, The London Free Press has explained that bodies were removed from the old St. Paul’s cemetery and a neighbouring Methodist cemetery over a five-year span in the in the late 1800s. The bodies were removed due to fears of contamination from cholera. The consultants have also stated that, according to records, at least part of the marked cemetery was intentionally left behind. Timmins Martelle Heritage Consultants will be conducting the archaeological study at the fairgrounds. 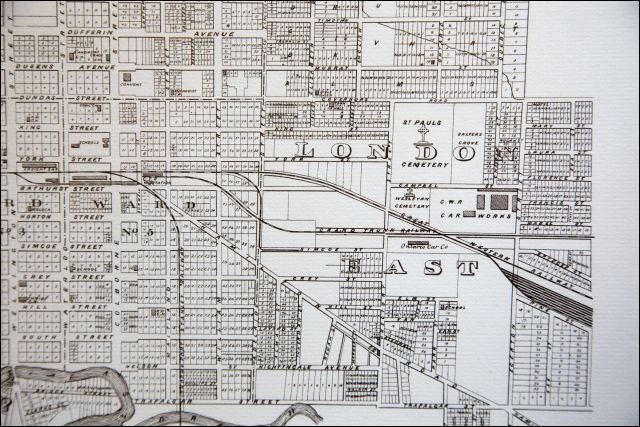 A map of London, Ont. from 1879 features the locations of cemeteries that are at the current site of the Western Fair District. To view a large version of the map, click here. (Image courtesy Derek Ruttan/The London Free Press/Postmedia Network).

Local historian Joseph O’Neil has told The London Free Press that he is “99 per cent convinced that they will find something there.” O’Neil also cited the 2004 discovery of graves while the Agriplex was being built on the fairgrounds.

While speaking with the CBC, Timmins Martell Heritage Consultants’ manager of planning and business development, Jim Sherratt, stated that the archaeological study will be focused "just around the edges of the [Canada Building], where they're looking at either demolishing that building … or making some changes to it. So we'll be working around the periphery."

Sherratt went on to tell the CBC that the cemetery, which was closed in the 1880s, ran from Dundas and Rectory streets down to Florence. "As part of that closure they took six years to move bodies over to the Woodland Cemetery on the other side of the city,” said Sherratt, “but we know from our experience in different parts of London and other cities that often there are burials left behind. So there may be a few that you find underneath the parking lot."

The study, which is expected to take a few weeks, is expected to begin at some point in the late spring or early summer. It is also expected that the parking lot will be repaved after the conclusion of the study.

(With files from the CBC and The London Free Press)

Surprised about all the talk

Surprised about all the talk of expanded casino on grounds, when it was subject to zoning requirements/development and there were literally skeletons in the closets, with a one sentence reference in city documents?