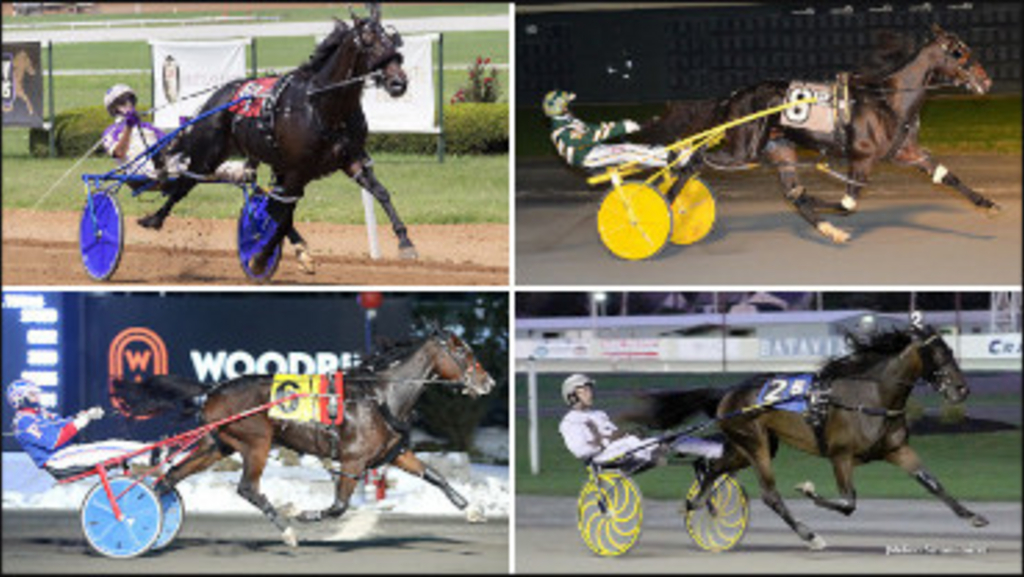 A number of high-profile Standardbreds made solid strides toward a return to the races during the Saturday (April 24) session of qualifiers at The Meadowlands.

Balenciaga didn't make any starts at two, but the $270,000 yearling started on the path to justifying that price tag with a first-over grinding win in 1:56.3. The son of Chapter Seven - Iluvmyjimmychoos was guided to victory by Scott Zeron for trainer Paul Kelley and owners SRF Stable and Crawford Farms. Maverick, harness racing's highest priced yearling by virtue of his $1.1 million sale price, made a break in stride while closing in the stretch.

Mon Amour closed strongly in his qualifier for trainer-driver Svanstedt and nailed Sonofamystery (Marcus Melander) at the wire to win his first sophomore test in a life's best 1:54.4. The two-of-six winning rookie, a $180,000 2019 yearling, is owned by Al Libfeld, Marvin And Lynn Katz and Sam Goldband, all hailing from the Greater Toronto Area.

The sixth qualifier of the morning looked like a Miss Versality leg with a wealth of distaff trotting talent. The best of the bunch this morning was the debuting Hypnotic AM, who Brian Sears angled from the pocket late in the mile to spring past the groovy tempo-setting Felicityshagwell S (Svanstedt) and hit the wire first in 1:54.4. Sophomore Breeders Crown winner Next Level Stuff (Tim Tetrick) closed well to finish third ahead of O'Brien Award winner Sorella (Yannick Gingras) after a ground-saving trip. Manchego (Dexter Dunn) forged first up but failed to fire, fading to finish fifth.

Courant Inc. owns and Marcus Melander trains Hypnotic AM (Chapter Seven - Daydream AM S), entering her four-year-old campaign with a summary of 12-6-3-1 from 22 career starts and more than $1.1 million in earnings.

The fastest trotting mile of the morning came courtesy Oney Hall, who had been racing at Mohawk earlier this year for trainer Bob McIntosh and was making his 2021 stateside debut for trainer Brett Pelling. Driver Todd McCarthy had Oney Hall off the early tempo, established by Beads (Sears) before he self-destructed uncontested on the lead. Through a :27.4 final panel, Oney Hall was able to power past Crystal Fashion (Jordan Stratton) and hold off Sermon (Kasper Foget) and hit the wire in 1:54.1. Alan Leavitt owns five-year-old Oney Hall (Deweycheatumnhowe - On With The Show) a 14-time winner approaching $160,000 in purses.

Hot Mess Express had her act together and impressively knocked off stakes stars Scarlett Hanover (Ron Burke), Continualou (David Miller) and Rocknificent (Scott Zeron) in her first appearance of the season. Andy McCarthy guided the daughter of Panther Hanover - My Heart Was True to victory in 1:53.3 for conditioner Tony Alagna and former NBA star Sam Bowie.

Stablemate to Hot Mess Express, Treacherous Reign made her first start as a five-year-old and looked like a mare that will factor prominently this season. Dave Miller was at the controls for the gate-to-wire 1:53.1 performance, punctuated by a :26.1 closer for trainer-owner Tony Alagna and co-owners Big Als Stables, Let It Ride Stables Inc. and Bottom Line Racing LLC.

One of the most anticipated miles of the morning came in the 12th qualifier when the undefeated Perfect Sting made his sophomore debut. With regular pilot David Miller at the lines for his injured trainer Joe Holloway, Perfect Sting paced through panels of :28.3, :58 and 1:26.3 before Miller let the colt out a notch turning for home. Perfect Sting paced powerfully for the wire, closing in :25.4 to trip the timer in 1:52.2 and more than lengths ahead of Highlandbeachsbest (Scott Zeron).

A winner of 10 freshman starts en route to the Dan Patch Award for his division, Perfect Sting (Always B Miki - Shebestingin) is owned by breeders Brittany Farms LLC and Val D'Or Farms, and is the #1 rated colt in the 2021 TROT Magazine Pepsi North America Cup Spring Book.

Highly-rated sophomore pacer Southwind Gendry improved upon his 1:52.4 winning outing from a week ago in his morning test. Clearing to the lead for driver Yannick Gingras after a :28.4 opening split, Southwind Gendry picked up the pace in each subsequent fraction, pacing in :28 (:56.4) and :27.3 (1:24.2) before sprinting home in :26.3 to score in 1:51. Exploit (Todd McCarthy), the 2020 Metro Pace winner, was a length back in second in his sophomore debut.

Tom & John Cancelliere look to have a serious contender in the four-year-old ranks by the name of Ruthless Hanover. Unraced at two, the son of Somebeachsomewhere - Rockaroundthetrack was 6-2-2 in 12 sophomore starts last season with a 1:48.4 score at The Meadowlands last December. After a 1:51.4 score last week, Ruthless Hanover returned to best a group of four-year-olds that included a debuting Warrawee Needy (Tim Tetrick) and Allywag Hanover (David Miller) in 1:50.3.

In the final qualifier of the morning, world record holder Elver Hanover (Gingras) came first up against pacesetter Fortify (Tim Tetrick) after fractions of :27.4, :56 and 1:23.4, then paced home in :26.3 for the 1:51 triumph. Angers Bayama (Andy McCarthy) got up for second with Fortify just back in third. Elver Hanover (Yankee Cruiser - Edra Hanover) has now won all three of his four-year-old qualifiers for Burke Racing, Dr. Bridgette Jablonsky, Jason Melillo and JandT Silva Purnel & Libby, and will unquestionably be pointed for the opening leg of the Graduate Series at The Meadowlands one week from today.