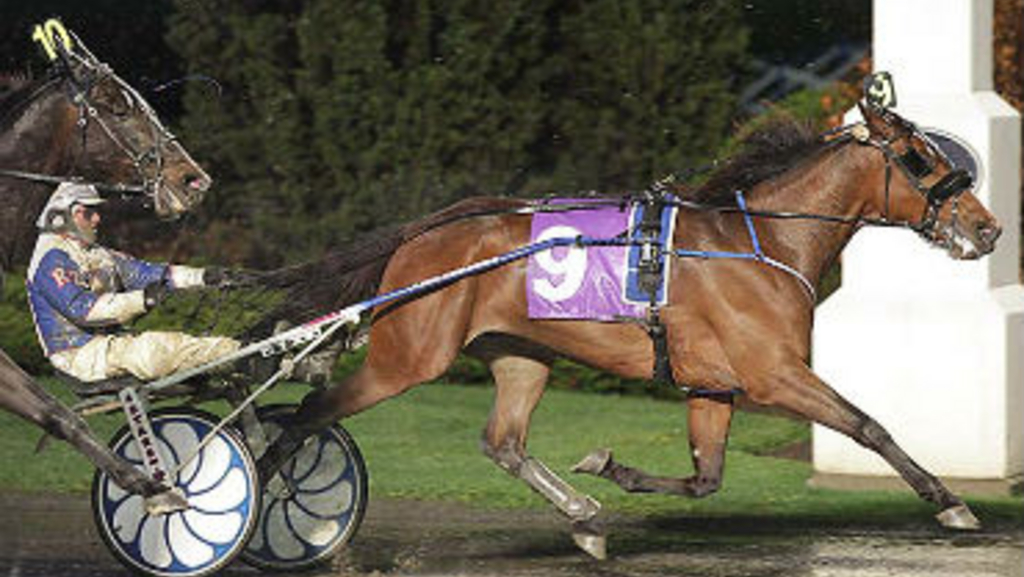 Fans were treated to a terrific program at Woodbine Racetrack on Monday, unfortunately Mother Nature didn’t exactly do her part when it came to the weather

. Rain and wet snow turned the racing surface into a sloppy strip, and as a result there were a few upsets along the way.

Windsong Geant played the role of the spoiler in the $50,000 Open Handicap Trot for trainer/driver Rick Zeron, who guided the soon-to-be European-bound speedster to a tempo-setting score over Canada’s 2011 Horse of the Year, San Pail.

Lexis Noah had Windsong Geant parked at the quarter marker in :27.1 before the latter swept to the top. Once on the lead, Windsong Geant sped through middle fractions of :55.4 and 1:25 before turning back a late challenge from San Pail, who never saw the pylons. The margin of victory was three-quarters of a length in a time of 1:55. Dig For Dollars rounded out the top three finishers in the 10-horse affair.

Sent off at odds of 5-1, Windsong Geant won for the second time this season for the partnership of The Brabant Stable of London and Fred Brayford of Alliston, ON. The five-year-old son of Kadabra-Early Secret has put together a 2-2-5 record in 10 tries this year while potting more than $100,000 in seasonal earnings. His lifetime loot stands at more than $386,000.

Costly breaks were made by a number of the lasses who faced the gate in Monday’s $50,000 final of the Celias Counsel Series, but Im On Cloud Nine was on her best behaviour and as a result she earned the sweep of the event for three-year-old trotting fillies.

Jack Moiseyev tucked his charge into the four-hole while Sugar Wheeler roared to the lead from Post 9. Sugar Wheeler hit the opening quarter in :28.3 and was unbothered past the half-mile pole in :58.3. Pressure was applied to Sugar Wheeler around the final turn, however, and it came in the form of Im On Cloud Nine. Sugar Wheeler and that first-over foe where side-by-side at the three-quarter station in 1:28.4, and they continued their fierce battle all the way down the lane before Im On Cloud Nine edged clear in the final strides to win by half a length over Sugar Wheeler in 1:58.2. Third prize went to Sher To Be.

“We weren’t too concerned as long as we didn’t get any road trouble,” said trainer Kevin O’Reilly following the victory. “She seems very versatile. You can drive her anyway you want. She just has that desire to win, which is a great thing to have.”

The daughter of Angus Hall-Celebrity Angel, who is owned by W Donovan of Ft. Lauderdale, FL, is now 3-for-3 this season after going 1-for-5 in last year’s rookie year. The lion’s share of the purse boosted her overall earnings to $74,040.

Three-year-old pacing colts and geldings were also in action as Woodbine hosted round one of The Diplomat Series. Two divisions – each carrying a purse of $25,000 – went postward.

State Treasurer drew first blood for the tandem of driver Jody Jamieson and trainer Dr. Ian Moore. The son of Real Desire-Ideal Treasure, who was making his first start of the year after back-to-back qualifiers in Florida, turned a ground-saving trip into a 1:56.1 triumph.

Twin B Hollister and Spinarama battled to the quarter pole in :29.2 before the latter muscled his way to the top. Spinarama then led the group to the mid-way point in :59.1 before giving up the lead to the backstretch-brushing Winbak Warrior. That longshot sprinted past the three-quarter marker in 1:27.3 before getting hauled down in the final strides by State Treasurer, who found late room and used a :27.3 final frame to post the head decision. Winbak Warrior held on gamely for the place position, while Twin B Hollister took home the show dough.

Sally MacDonald of Souris, PE and Sophie MacDonald of Regina, SK share ownership on the colt, who put together a 1-2-1 record from eight starts as a rookie. The $12,500 payday bumped the pacer’s bankroll to $61,636.

Piston Broke took the second division in gate-to-wire fashion for driver Sylvain Filion, who watched the gelding extend his winning streak to five-in-a-row in the process.

Rob Fellows shares ownership on the streaking sophomore with Willard Sabrosky and Arpad Szabo. They’ve collectively watched the pacer put together a 6-2-1 record from 12 trips postward this season. The eight-time winner boosted his overall cash stash to $124,010 with the victory.

A lone $25,000 division went postward in the opening leg of the Princess Series for three-year-old pacing fillies, and Stage It Right pulled off a 7-1 upset in front-stepping fashion for the team of driver Mario Baillargeon and trainer Rick Zeron.

Baillargeon got away third with the daughter of Artiscape-Whenuwishuponastar while Arm In Arm motored to the lead and took the field past the quarter pole in a :28-second clip. Baillargeon punched the throttle as soon as they entered the backstretch, and in a matter of strides Stage It Right found herself on the lead. She hit the half-mile marker in :57.2 before being pressed around the final turn by race favourite Yagonnakissmeornot. The three-quarter time flashed up in 1:25.4 for Stage It Right, who only needed a :30-second closing quarter to win by half a length over Yagonnakissmeornot. Third prize was earned by Arm In Arm.

Purchased earlier this year by Richard Lombardo of Solon, OH and Howard Taylor of Philadelphia, PA, Stage It Right improved her sophomore record to 4-2-1 from just seven starts while increasing her lifetime earnings to $47,400.

The $35,000 second legs of The Diplomat Series and Princess Series are slated for Thursday, May 3, with the $75,000 finals scheduled for Saturday, May 12.

(With quotes from WEG)