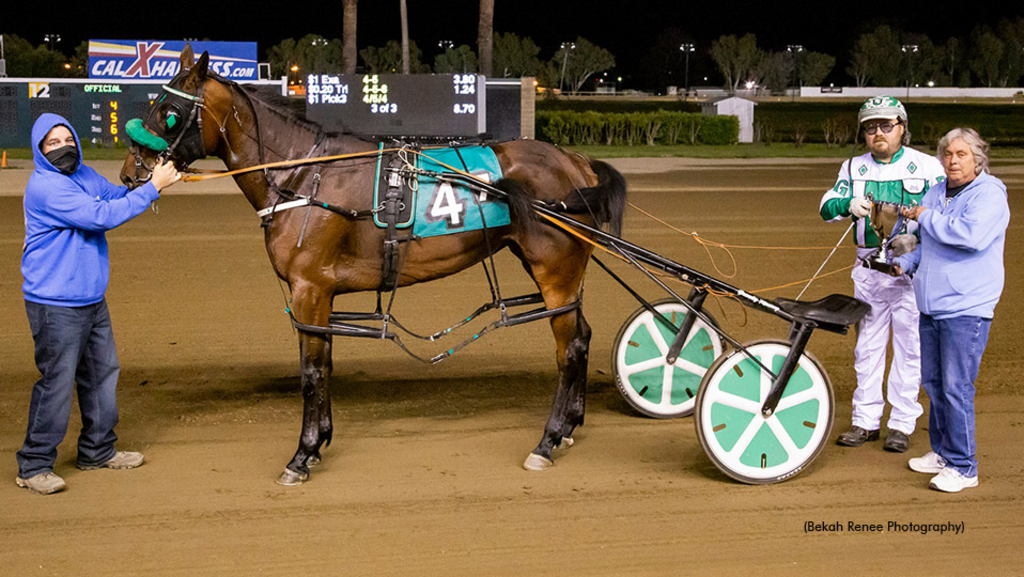 It’s always nice when a plan comes together and that’s exactly what happened with the four-year-old pacing mare Senga Nightmare and her owner/driver/trainer Ryan Grundy.

After capturing the Jack Williams final in January, Senga Nightmare went on to make a clean sweep of the five California Sire Stakes for her division, including last week’s $50,000 championship.

Sent off at 3-5 in that affair, the Grundy performer settled early, put in a powerful brush to command on the final turn and went on to a nearly five-length romp while not giving her many backers even an anxious moment.

“She was bred by my client Ken Gunn and I’ve had her since her first start,” related Grundy. “The plan was to come down from Alberta and target the two late closers and then the Sire Stakes, and it worked out pretty well.”

No kidding. Between March 11 and last week, Grundy didn’t race in anything but those Sire Stakes and completely dominated the opposition as the daughter of Vertical Horizon has now banked nearly $72,000 in the process this season.

While Grundy admits Senga Nightmare prefers to do her best pacing at the end, he found himself moving earlier than usual to avoid any of the pitfalls that could come with waiting too long.

“I can always count on her giving me a real good finish,” added a proud Grundy.

There is an eight-card on tap under the Watch and Wager LLC banner with first post set for 6:45 p.m.

Mibwest Kid is a four-year-old son of Its That Time who is owned and trained by Gordie Graham and will have Chip Lackey at the controls while leaving from the No. 3 slot in the field of six. He has posed for snapshots after nine of his 13 starts on the year, the most recent coming last week when he proved a punctual 6-5 favourite in coast-to-coast fashion with Nick Roland guiding. He moves up a notch for Friday night’s assignment.

Meanwhile, Avaya Hanover gets some class relief in the contest for the fillies and mares after setting some swift fractions while taking on the likes of Rockin With Lou in the Kirk Breed. The Western Ideal mare is owned by Barbara Arnstine, Stephen Chambers and Kathleen Plested with Plested the trainer and Mooney Svendsen in his usual spot in the sulky while leaving from the No. 2 post. Her most recent score came in an Open II event on March 13.

Looking ahead to Sunday night, the $10,000 Lloyd Arnold Pace and the $10,000 Distance Divas at a mile and one-half will be the main attractions on that nine-race program.

(With files from Cal Expo)