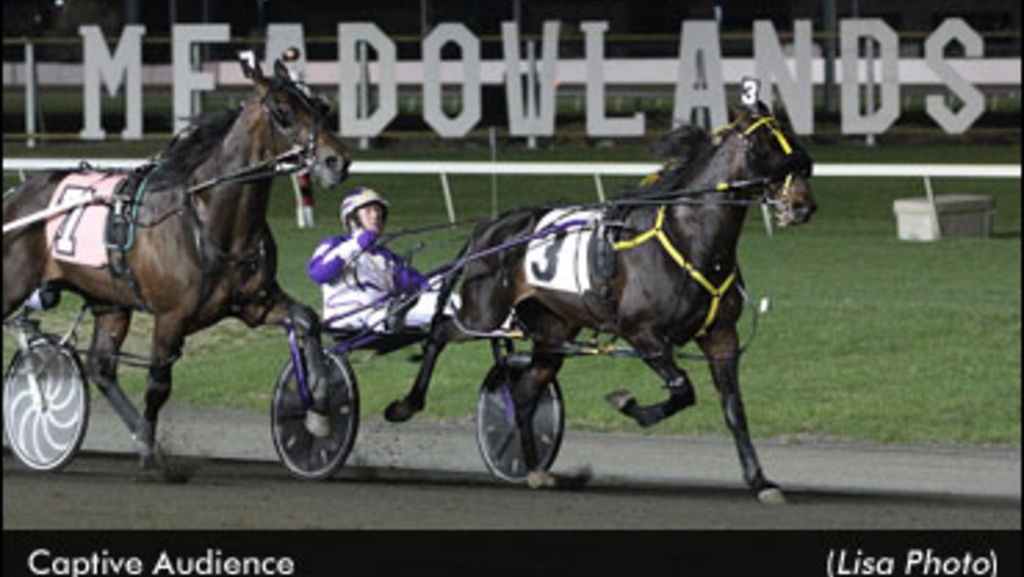 Saturday night at The Meadowlands was pleasant weather-wise with temperatures in the 50’s and little to no wind while the action on the racetrack was hot right from the start.

The sixth race was the $63,000 Whata Baron Serie final, remembering one of the great pacers of the early years at The Meadowlands, and it turned out to be a slugfest.

Ontario-owned Captive Audience and Wake Up Peter were both in line for a sweep and Dave Miller made a bold early statement, flaunting the impressive early speed of Captive Audience through the :26.3 opening quarter while Scott Zeron and Wake Up Peter could not find position from his outside post and were forced to press on for the lead. The pair met at the half in a demanding :53.3 and went toe-to-toe from that point forward. At the wire, it was Captive Audience prevailing in a close photo while Wake Up Peter had to settle for the place after an absolutely paint peeling effort.

The time of 1:48.3 was a new career-best for the winner, trained by Corey Johnson for Waterdown's Debbie Element and Mac Nichol of Burlington.

The $55,800 Artistic Vision final (race 11) pitted favourite American In Paris, questing for a series sweep, against JK Letitgo, who had her own reign of terror interrupted by a pair of losses to her rival in the series legs. Jim Morrill Jr. was intent on the lead with American In Paris and set honest fractions as JK Letitgo made a bid around the final bend, taking a bravening tuck passing the 1:21.4 three panels. In the stretch, JK Letitigo emerged from the pocket and wore down the favourite to win in 1:50.

“I wanted to be close up, the fractions were fast enough that I thought she had enough to win," said driver Jonathan Roberts in the post-race interview. "She actually was good enough last week, but had no room in the stretch.”

The winner is trained by Joshua Parker, who is a partner in the filly with Nanticoke Racing, Barry Spedden and Kevin Evans.

On the pari-mutuel front, Saturday’s first race offered a Pick 5 carryover of $30,782, which attracted $140,596 in new money and those first few winners were not easy to have.

Pierce came into the opener, a $30,000 instant series for non-winners of two races, with a perfect record -- he had never won in 18 previous races. Tonight would be a different story as driver Scott Zeron, who had spoken to this particular horse’s penchant for keeping himself classified in a Friday paddock interview, pressed to the lead passing the three-eighths and held on in a photo for the 1:51.2 maiden breaker at odds of 8-1.

The suspense continued to build when Jamaican Cowboy and Vinny Ginsburg won the fourth race from the clouds at 19-1.

The will pays leading into the fifth and final leg of the bet revealed one uncovered combination and every held combination returning either $120,000 or $60,000 on the wager.

In the end it was 5-1 shot Moonliteonthebeach scoring in a new record of 1:51 for Jonathan Roberts resulting in a published payoff of $60,140 for each 50-cent wager with the correct combination.

The fifth and final preliminary leg of the Legends vs. Phenoms Driver Challenge was contested Saturday night as well. For the Phenoms, it was the same story as Scott Zeron swept each of the five preliminary legs, doing so this time with 79 points. On the Legends side, it came down to the final race as Dave Miller and Corey Callahan were tied after 12 races. Miller won the finale with OK Fame and took the $2,000 prize with 94 points.

The 10 drivers qualifying for the championship round on Saturday, April 26, which will offer a $15,000 first-place grand prize are Dave Miller, Corey Callahan, John Campbell, Jim Morrill Jr., Scott Zeron, Joe Bongiorno, Vincent Ginsburg, Jim Marohn Jr., Steve Smith and Mike Wilder. The championship round will be contested over a limited number of races and all 10 drivers will have the same number of drives, giving them all an equal opportunity to take home the grand prize.

What a pleasure it is to

What a pleasure it is to watch racing from the Meadowlands in HI-Def. I guess I can only dream about being able to see it here in Ontario in HI-Def.