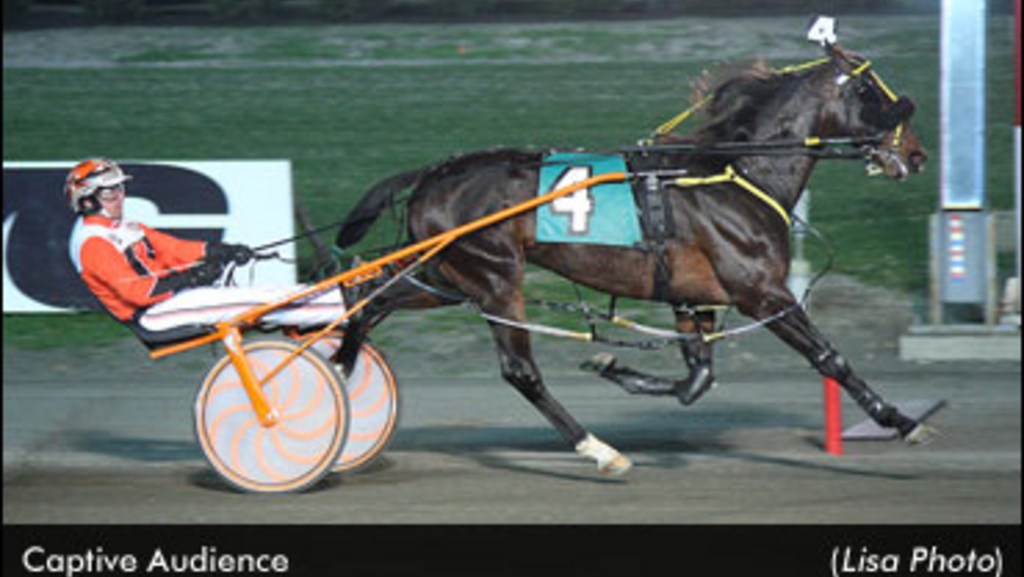 Jim Morrill Jr. made a decision early in the Free For All tonight (Saturday, April 12) at The Meadowlands and that was to beat Golden Receiver at his own game.

Reaching the opening quarter in :26.1, Morrill Jr. and Allstar Legend forced Golden Receiver into the pocket while clicking off a :54.4 half-mile and hitting three-quarters in 1:22.3. On the far turn, Corey Callahan seemed to be asking Golden Receiver to pick up the pace, but the response just wasn't there tonight. Meanwhile, the early fractions didn't seem to bother Allstar Legend at all as powered home in :26.4 while pacing on the front-end to trip the timer in 1:49.2.

Allstar Legend won for the fourth time this year for trainer Ron Burke and owners Brittany Farms and John Cherveny.

The Burke theme continued in the fifth race, Dash For The C-Notes Final as Sky McFly put forth a powerful first over effort through fractions of :26.3, :55.3 and 1:24.2 before pacing home in :26.4 and holding off favourite Stallone Blue Chip at the wire.

Through five races, the tandem of Burke and Morrill Jr. had three winners on the card.

Tonight also marked the second round of the Whata Baron Pacing Series. The first division featured a heavy favourite in round one winner Wake Up Peter, who cut the mile with Scott Zeron through fractions of :26.4, :55.1 and 1:23.1 before pacing home in :26.1 to complete the mile in 1:49.2 while holding off a hard-to-steer Alexas Jackpot, who rallied off cover.

The win was Wake Up Peter's sixth from eight starts this season for trainer Larry Remmen and Milton, Ont. owner Bradley Grant.

The second division of the Whata Baron was another tour-de-force by Captive Audience, who duplicated his 1:49 round one performance to score another victory and will go for the series sweep next Saturday night.

Captive Audience made a quarter move to the lead and peeled off a :54.3 half-mile before hitting three-quarters in 1:22.2 and then powering home for the win.

He will head into the Whata Baron Final as the favourite for Andy Miller, who guided the son of Art Major for Corey Johnson and owners Debbie Element of Waterdown, Ont. and Mac Nichol of Burlington, Ont.

Another leg of The Legends vs. Phenoms Driver Challenge is in the books. The Legend standing tall was Morrill Jr. (96), his second win in the Challenge while Zeron (95) led The Phenoms for the fourth consecutive week.

Racing returns on Friday, with first post time at 7:15 p.m.