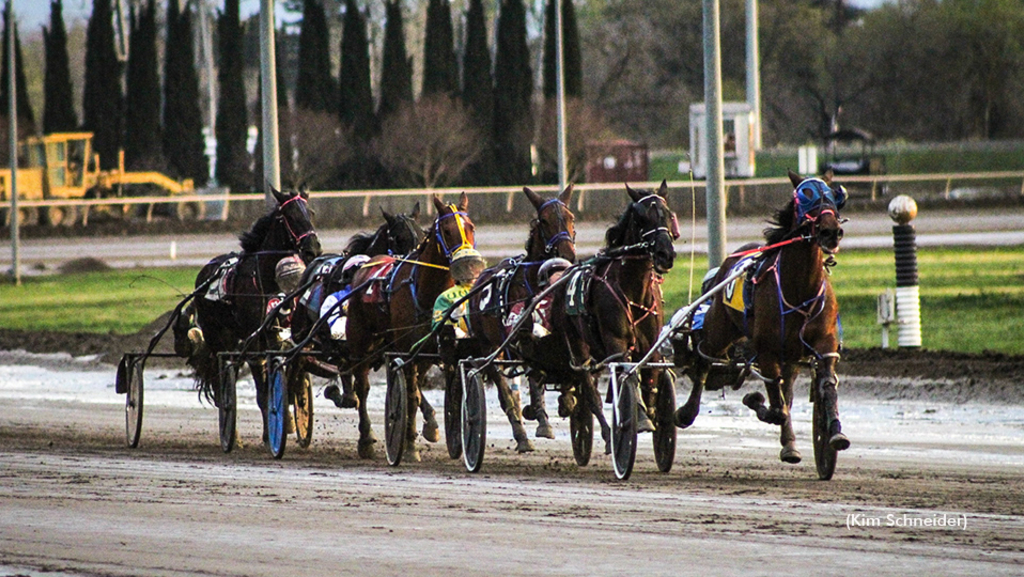 Senga Nightmare, who has accounted for all three of the big-money events at the meet for the four-year-old pacing fillies, attempts to keep the momentum going in Friday night’s featured $20,000 California Sire Stakes.

There will be 10 races presented by Watch and Wager LLC and things will get underway at 6:45 p.m. The main event set as the sixth contest on the program.

Senga Nightmare is a four-year-old daughter of Vertical Horizon who is owned, trained and driven by Ryan Grundy. She has accounted for nine of her 29 starts and established her 1:54 mark in a January 23 conditioned event.

Since that victory, Grundy’s mare has captured all three of the stakes events for the division while putting her class and versatility on display.

In that most recent mile two weeks ago, Senga Nightmare did not disappoint those who backed her down to 3-5 favouritism as she made what proved to be the winning brush to command down the backside en route to the length and a half score.

Taking her on are: Tartan Patch with Rene Goulet; Rockin The Dragon and Mooney Svendsen; Doubleontherocks for Luke Plano; and May Day Maggie with Nick Roland.

Looking ahead to Sunday night, Chase The Gold will look for his 10th straight victory in the $20,000 California Sire Stakes for the four-year-old pacing colts and geldings, while Its Pointless and Allmyxsliventexas are set to do battle in the $10,000 Don Fowler Memorial Pace.

Wind Meup To Life has started her career in smart fashion, capturing a Sire Stakes in her March 4 debut and coming back to finish second in the most recent stakes clash for the three-year-old pacing fillies.

The daughter of Wind Me Up carries the banner of Edward Gutin, takes her lessons from Rick Bertrand and has been handled in each of her starts by Cordarius Stewart.

Her stakes-winning introduction to the game earlier this month was polished off in style by over five lengths, but she has run into a very strong rival in Give Me This Dance in her last two appearances and has had to settle for solid runner-up finishes in those contests.

“She didn’t race as a two-year-old because she came up a little sore and they decided to turn her out and let her grow,” related Bertrand. “She filled out nicely and learned a lot during that time being trained down by Justin Anfinson.

“That, plus her breeding, has really helped her become a racehorse. She’s very nice to be around and is perfect at the barn.”

Wind Meup To Life will get two more chances at Sire Stakes glory before this meet comes to a close and it will be interesting to see if the Gutin colour-bearer can turn the tables on Ge Me This Dance in what is turning into a pretty interesting rivalry.