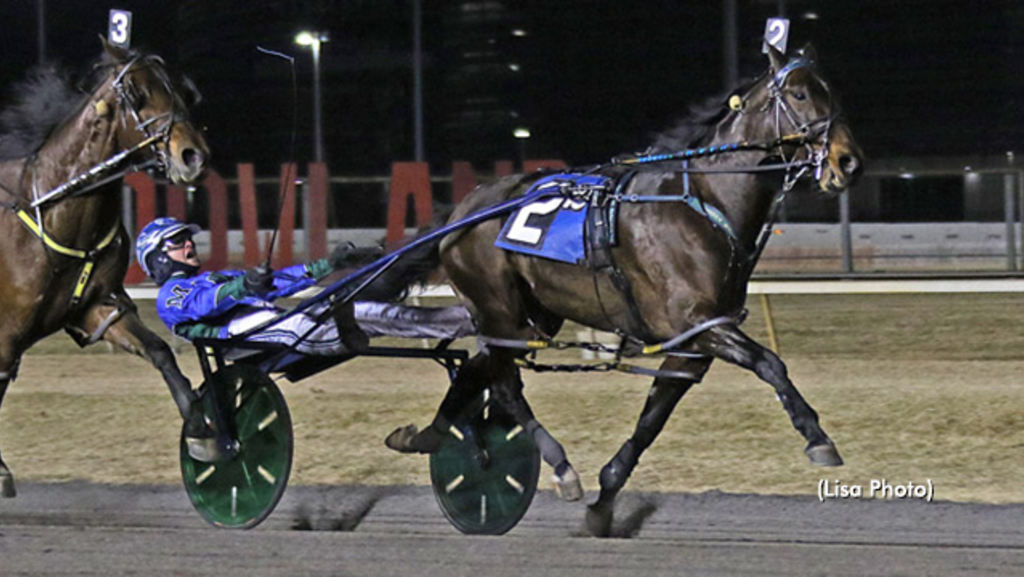 After a win last week that driver Todd McCarthy described as “humongous”, American History bumped up to the Preferred ranks and scored in the weekly $34,500 featured pace on Saturday (Feb. 26) at The Meadowlands.

Covered Bridge, the 8-5 favourite, was in search of his third-straight victory against the best horses on the grounds and led the eight-horse field at the quarter in a sleepy :28.2. McCarthy then emerged from the three-hole and moved to the top at the three-eighths, cutting out the half in :56.1 and three-quarters in 1:23.1.

It was a two-horse sprint from there, and McCarthy knew the kind of stock he had pursuing him and opened up a two-length edge at the eighth pole, which proved to be just enough, as Covered Bridge’s late surge in the final sixteenth came up a nose short in 1:49.4. Sonny Weaver N finished third.

“He definitely was as good as he was last week,” said McCarthy of American History. “He was a little more settled tonight. He was calmer. I got him to a spot where I would have been happy to sit until the backstretch, but given the slow first quarter, I had to move him a little earlier.

“Off that first half, I thought I had enough fuel left to get me there. He was pretty happy. He knows where the wire is and he dug in when Yannick’s [Gingras, driving Covered Bridge] horse was coming. Full credit to [trainer] Tony [Alagna] and the job he’s done. It’s hard for people to understand just how good he was last week given those headwinds. I was pretty confident with him tonight.”

American History, a seven-year-old son of American Ideal-Perfect Touch who is owned by Brad Grant, returned $10.00 to his backers as the 4-1 third choice in the betting and lifted his lifetime stats to 28 wins from 78 starts, good for a bankroll of $1,293,899.

$3 MILLION: Propelled by the track’s three most popular multi-leg wagers, betting eclipsed the $3-million mark for the first time in 2022 at The Meadowlands Saturday night.

GETTING IT DUNN: In his first appearance of 2022 at The Big M, three-time defending United States Harness Writers Association Driver of the Year Dexter Dunn showed no signs of rust, winning four times on the program.

A LITTLE MORE: Leading driver Gingras upped his colony-leading dash-win total to 43 after registering a driving double. The 42-year-old Hall of Fame bound pilot has now won at least twice on all 13 Big M race cards in 2022.

One sharp bettor raked the pot in the 20-cent Survivor Pick-7, needing only the first six winners to cash in for $9,079.