It was only three years ago that Montana native Annie Stoebe first heard of harness racing. It did not take her long to determine the sport was for her.

The 30-year-old Stoebe was no stranger to horses. She grew up on a farm near Great Falls and spent much of her life barrel racing, which enabled her to get a rodeo scholarship to a college in Texas. Two and a half years ago, Stoebe began working for trainer Brett Bittle and the idea of climbing into the sulky and racing became entirely enthralling.

“Once I started in this industry, I thought ‘this is really cool,’” Stoebe said. “I thought it would be so different than racing against the time clock; you actually see your competition. I sold my barrel horse and I was fully invested.

“There are not many sports where you can own the animal, train the animal, sit behind him, and take him to the races. It doesn’t matter if you’re 30 or 60, anyone can sit behind a racehorse, at least jogging or to some extent. I’m telling everyone back home they should look into this.” 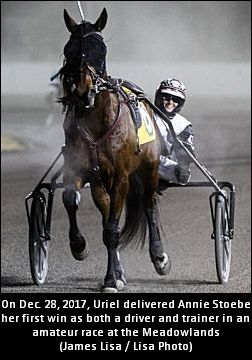 Once Stoebe decided to get more involved, she spent several months looking for a horse of her own. Five months ago, she got her man when she claimed a trotter named Uriel. The seven-year-old gelding makes up her stable. And on December 28, Uriel delivered Stoebe her first win as both a driver and trainer in an amateur race at the Meadowlands Racetrack.

“It was pretty exhilarating,” Stoebe said. “To be honest, it took until I’d turned around and was heading back (to the winner’s circle) to even believe it happened and was real.”

Stoebe and Uriel were never threatened in the race and won by almost eight lengths at odds of 64-1. The margin of victory contributed to Stoebe questioning whether it was real.

“I kept looking back, wondering where everybody else was,” Stoebe said, laughing. “I was up by like five (lengths) at the half and I got to three-quarters and they were still back there. I crossed the finish line and I looked back and everyone was way back there. I thought, ‘did I miss something? Was there a recall? What happened? Is this real?’”

Stoebe and Uriel have yet to add to their win total since that night, but have finished off the board only twice in six races this year. Stoebe plans to continue racing in amateur events, but might cut back when Bittle’s stable begins racing its six two-year-olds later this season.

“I’m looking forward to the summer with them,” Stoebe said. “I love driving and I love my horse, but my driving might take a backseat a little then.

“I love driving, but I love training and seeing how the (young horses) go from not knowing anything to the racetrack. That’s why I love horses; you get to see them learn things every single day. You get to see your work shine through them. They pay you for your time. It’s a very rewarding job.”