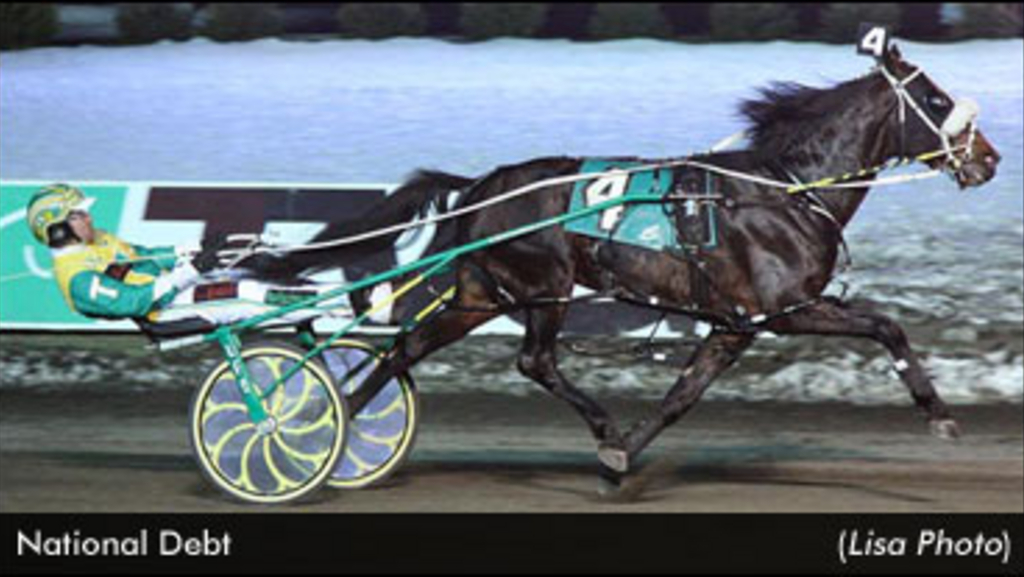 It was an enticing mix of old and new at The Meadowlands on Saturday night with fan favourite Golden Receiver making a successful return to the track and a couple of lightly raced three-year-olds with big futures capturing divisions of the Buddy Gilmour Memorial Series.

Golden Receiver has had a remarkable career for trainer Mark Harder and owners Our Horse Cents Stable and Nina Simmonds, winning over $2 million dollars with many of his greatest victories coming at The Meadowlands. Now aged nine years, Golden Receiver returned to the racing wars with Corey Callahan aboard after a two and a half month respite following his second-place finish in the 2013 TVG Pacing Championship final on November 30.

On Saturday, driver Callahan called upon his mount's customary speed and style to set comfortable (for him) fractions of :26.1, :54.4 and 1:22.4 before holding off the formidable late bid by the pocket-sitting Easy Again by a neck in 1:49.2. Both Harder and Callahan were elated by the return of their "Big Horse" in the same fine form he has exhibited for the past several years.

The Buddy Gilmour series (formerly known as the Junoir Trendsetter) for three-year-old colts and geldings has long been a springboard for lightly raced sophomores to gain needed experience as they embark on what their connections hope will be a summer stakes campaign. The winners of the pair of $17,500 divisions raced on Saturday gave further cause for optimism to their connections, who had already made the February 15 nomination payment to the Meadowlands Pace on each.

Brittany Farms has raced many champions through the years and were a partner in last year's Pace winner Captaintreacherous. George Segal's nom de course looks to have another potential prodigy in the American Ideal colt Capital Account.

Trained by Jimmy Takter, Capital Account didn't make his first start until December 21, but has demonstrated unusual speed in his four prior outings with three wins and a place. Saturday's race was another step forward, resulting in a five length win in a new record of 1:51. Pierce, also from Takter's barn, was second and Grandpa Don, third.

Yannick Gingras has been aboard for all of Capital Account's races and handled him flawlessly again in this one. There's no questioning the colt's speed and once his mind and gait catch up he's going to be a force. 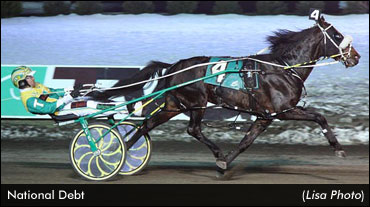 National Debt comes from an entirely different background, but was no less impressive in his east coast debut after travelling across the continent. He is being trained in New Jersey by Ron Coyne Jr. for Blair and Erna Corbeil and their partner, O'Brien Award winner Kelly Hoerdt, who developed and drove the undefeated colt to four impressive wins in Western Canada last fall. National Debt made a quick impression on the locals with his sharp appearance and long, powerful strides.

With two qualifiers under his belt for fitness, National Debt and Tim Tetrick caught the similarly unbeaten Dinner At The Met in his Gilmour split. On this evening, after taking an early tuck in third, Tetrick moved National Debt to the lead just past the :56.1 half and let him roll on a bit. When Dinner At The Met rolled up to challenge into the stretch National Debt had plenty in reserve, sprinting home in :26.3 to hold safe by three lengths in 1:50.3. Most impressive were the two separate bursts of speed National Debt displayed, one, making his bid for the lead past the half, the other in the stretch. When Tetrick asked for speed in the final eighth, the response was devastating. National Debt could provide quite the surplus for his connections in 2014.

It was a tremendous night for wagering at The Meadowlands Saturday. The total handle was a robust $3,625,092, which was a slight bump from last year. In addition, on-track handle was up as the facility was packed with patrons taking advantage of the first signs of spring in the northeast. The attractions at Meadowlands Racing & Entertainment will only grow in the spring with the opening of Victory Terrace, the rooftop bar and lounge and The Backyard, which will be the expansion of the track apron with entertainment and dining options galore.

Racing resumes on Thursday, with the second round of the Charles Singer Memorial trotting series, with post time at 7:15 p.m.