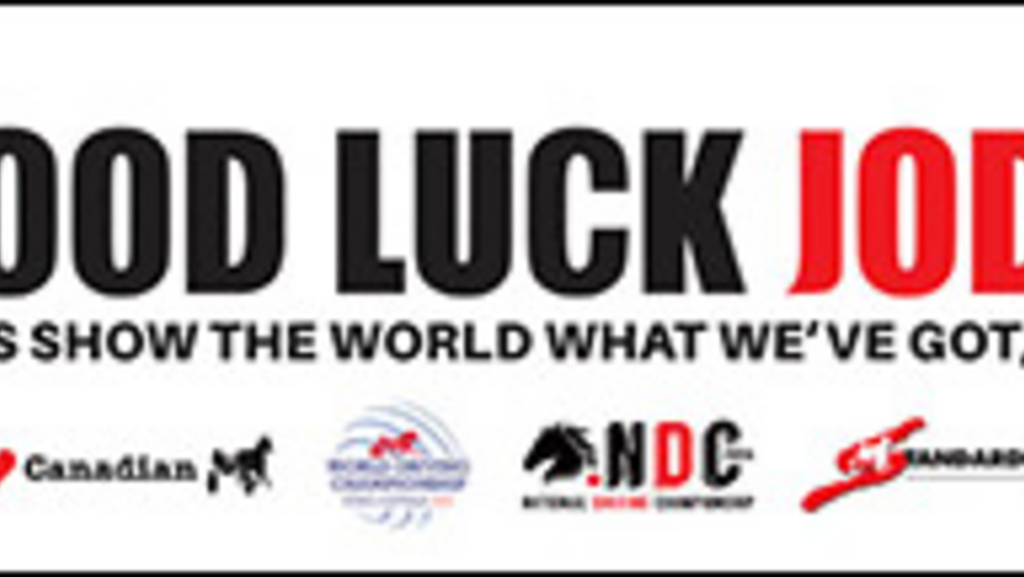 In a matter of days, Jody Jamieson will be headed down under to take part in the 2015 World Driving Championship as he looks to secure his third WDC title.

Jamieson, who won the event in 2001 in Finland and Sweden and then in 2011 in the U.S., won the right to represent Canada by virtue of his win in the National Driving Championship last August at Red Shores Charlottetown. The 2015 WDC takes place in New South Wales, Australia from February 21 through March 1.

"I'm heading down Wednesday; I guess you actually lose a day travelling downunder...so we leave Wednesday and we don't get in until Friday morning their time," Jamieson told Trot Radio's Norm Borg. "We have a couple of receptions on Friday afternoon and we start racing Saturday at Menangle, the big track in Sydney."

No stranger to racing in Europe, Jamieson will be making his downunder driving debut with his WDC starts. The differences in racing do not phase the dual WDC champion.

"The biggest difference would be the racebikes. The racebikes are a little longer and quite a bit more narrow, more the style of our jog carts but obviously they're built for speed."

Jamieson feels that the European drivers will be at a bigger disadvantage.

"The Europeans, obviously, race in quite wide bikes and sometimes they go quite a bit slower because they go longer distances but it seems to me that even if it's a longer distance in Australia that they're racing and going fast so I think definitely the Europeans will be at a disadvantage for at least the first little bit."

With U.S. representative Tim Tetrick already in Australia and driving, the question was put to Jamieson if he'd be getting in some starts prior to the competition.

Jamieson clearly feels very strongly about representing Canada and Canadian harness racing, both in his own country and abroad. He was part of the 2015 Milton Sports Celebrity Dinner, where he was presented with his 2015 WDC helmet by former Toronto Maple Leaf Darcy Tucker.

"I feel it's my responsibility to the people that care about me and care about harness racing in Canada and Ontario that I represent them to the best of my ability and that when I'm called upon to do that, they want the best drivers in the country and that's why I'm asked and that's why I've qualified. I'm happy to extend the Canadian brand of harness racing anywhere in the world."

Jamieson will be taking a bit of time off while in the southern hemisphere before competing in a race after the World Driving Championship.

"We're going to hang out in Melbourne for a week after the competition's over, my wife Stephanie and I, and hopefully get to see a little bit of the country. Obviously it's a huge country and I won't get to see much of it. They tell me Melbourne is a beautiful city and I'm excited to have downtime in that country."

The 10 drivers will compete in 20 Heats across seven race meetings at six tracks in New South Wales. Here is a schedule of race dates, tracks and number of races:

Trot Insider will be providing daily coverage of the World Driving Championship, including video, photos and reports.

Show your support to our driver before he heads out! Send good luck messages to Jody by posting a comment below.
Tags
Jody Jamieson
Norm Borg
Trot Radio
WDC
World Driving Championship

As Glen McTruck would say;

As Glen McTruck would say; you're in striking distance after Day 1, so just drive on by. Lots of luck & good wishes...
Jack & Tisha

Good luck Jody. You certainly picked a good time to go. Minus 24C here today. I spent 3 weeks touring Australia in 2008 and visited lots of tracks that you will be racing at. You will have a ball. I just love Sydney, the harbour is spectacular Go see Nicole
Kidman while your there LOL
Melbourne is a beautiful classy city mate.
Enjoy your time. I know you will represent Canada proudly and successfully.
Good luck with the draws. Marv

In reply to The flight is a tough grind. by Bill Romahn

Jody... go win another one

Good Luck JJ. Us Durhamites will be pulling for you!!! Bruce "Beagle" Marshall

The flight is a tough grind.

The flight is a tough grind. Wishing you the best and enjoy the sights.

Good Luck Kid from the Riggin

Good luck Jody, show them how

Good luck Jody, show them how great Canadian drivers are

Best of luck Jody, have a

Best of luck Jody, have a great trip... as well I'm sure you will try a FOSTER or 2 down there

Good Luck Jody!!! Have fun and enjoy with the family. We'll be rooting for you!

Your Dad is an excellent

Your Dad is an excellent driver, as well as your Uncle Rod,I guess it runs in the family. Go have a great time in Australia, you have a massive cheering section all across Canada. We hope you win !

Good Luck Jody! We were in

Good Luck Jody! We were in Yonkers when you won the WDC back in 2011, what a rush that was to be there!! So wish we could go to Australia to cheer you on but it's not possible!! We will be cheering from Goderich loud and clear! You can do it!! Denis & Shelley Kerr

Good luck Jody, enjoy your stay with your wife, we will all be pulling for you. We also know you will do your best and that's all a person can ask for.

Go get'em Jody. We couldn't have hand picked a better representative or driver.

Good luck Jody, from all your

Good luck Jody, from all your friends and fans here in Pugwash,and Wallace, Nova Scotia.
We will all be cheering for you all the way.
Enjoy a well earned vacation after the driving championship.
All the best
Bert McWade

Bob Harvey said: Shirley and I hope this is yet another wonderful experience and barring a lot of bad luck in poor draws you will again emerge as the WDC.

May the best Canadian

May the best Canadian win!!

While there can you use your powers to see if we can get this event to Ontario
tracks - at least in part? We have not had it for years! (20 yrs. ++)
Dave.

Good luck Jody. Tell your old man to behave over there.

Good luck Jody; we will be

Good luck Jody; we will be cheering for you!

Have fun down there Jody and

Have fun down there Jody and best of luck. You guys will love Aus.

In reply to Best of luck Jody. by lloyd mac lean

good luck jody we will all