While Emoticon Hanover faced four fierce foes in the 2018 TVG Open Mares Trot last month, that number would have been five had The Meadowlands not refused the entry of Caprice Hill. 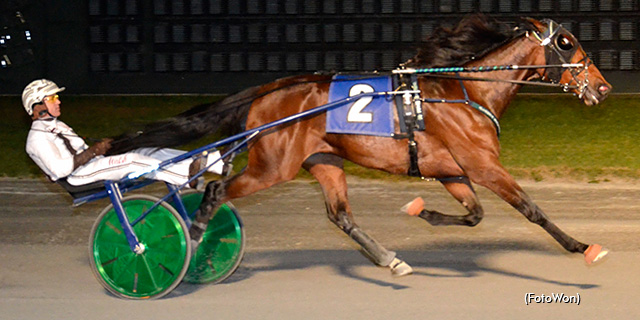 Trot Insider has confirmed that Caprice Hill was in fact denied entry to the TVG by The Meadowlands. Caprice Hill finished third in the 2018 Breeders Crown for trainer Chris Oakes, who had only trained the mare for her three October starts -- one at The Red Mile and two at Mohegan Sun Pocono. Owner Tom Hill told Trot Insider that the mare was in the care of trainer Marcus Melander at the time of entry to the TVG and Melander confirmed that information.

"I picked her up the day after the Breeders Crown, so I had her almost a month," said Melander. "It was too bad they didn't let her race; she felt really great and I was excited to race her. But rules are rules and we had to accept that.

"It felt like we found some problem with her that definitely could have helped her," Melander continued. "I had a really good feeling, same feeling I had with Crazy Wow when we were bringing him up to the Maple Leaf Trot...so it's too bad she couldn't be in the race."

When asked why the entry was denied, Jeff Gural, the Chairman of New Meadowlands Racetrack LLC, told Trot Insider that "the horse did not meet the trainer eligibility requirements." No further comment was made.

Hill has since made the decision to retire and breed Caprice Hill, noting that she was a sound racehorse at the time of his decision.

"She's been very good to us, and we've just decided that the time was right to move her along to the next phase of her career."

Thank you for providing an

Thank you for providing an explanation as to why The Meadowlands decided to deny Caprice Hill an opportunity to race in what would have been her swan song. Had she simply completed the race, she would have earned at least 5% of the purse. It's very unfortunate that the decision was made at the last minute, thus denying the horse's connections an opportunity to file an appeal. Caprice Hill, thank you for the memories, and best of luck to you in your new career as a broodmare!

In an update to this note,

In an update to this note, Meadowlands officials sent the following language from its stakes conditions on Friday afternoon that identifies grounds for exclusion from a Meadowlands 2018 stake. The emphasis below was added by The Meadowlands.

Disputes: All owners, trainers and drivers of horses nominated to this event must be accepted to participate at each Host Track or the nomination/entry may be denied without refund of previous payments. Any change of trainers made fewer than 30 days or within four starts of the date of this race will be reviewed by the sponsor. If such change is not accepted, it may result in refusal of entry. Sponsors reserve the right to amend these conditions as deemed necessary without liability.

Rules: A minimum of seven (7) separate interests may be required in any event or the event may be cancelled. All starters are subject to the detention policy of the Host Track. The rules of the Host Track and its state Racing Commission along with the USTA shall govern unless otherwise specified in these conditions. These races are subject to the Stallion Restriction Rule and Standardbred Racing Integrity & Accountability Initiative (SRIAI) see Meadowlands website for details. Any horse nominated to any Meadowlands stakes/event must be in the care of an approved trainer by April 15, 2018 for any stake/event raced during the month of May and by May 15 for all other 2018 stakes/events. Nominator also agrees that any horse paid into any 2018 Meadowlands stake/event may be required to be stabled for up to 14 days at a approved facility within a 150 mile radius of The Meadowlands or the Tioga or Vernon Downs stable area or an approved facility in a state that agrees to cooperate in an out of competition testing protocol by the date set by The Meadowlands for that stake/event for the purpose of out of competition testing. Failure to comply with these conditions may result in any agreement created by the acceptance of any stakes payment to be declared void at the discretion of The Meadowlands rendering the horse(s) in question ineligible to race in those stakes/events with no liability to The Meadowlands and no assurance of a refund of payments previously made to the stake/event in question. A nomination to these events is an agreement to the above terms and conditions.