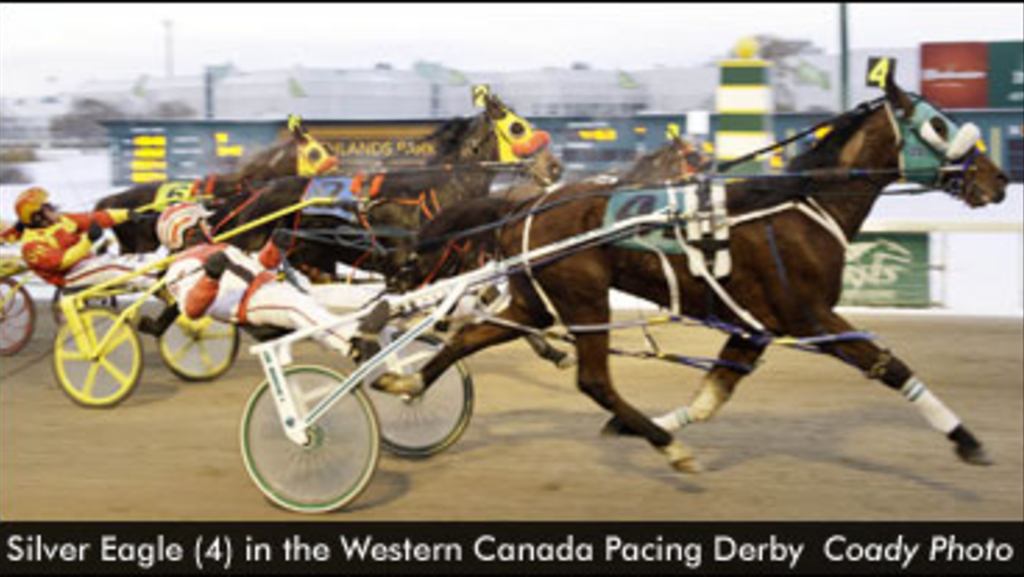 Silver Eagle unleashed his ferocious late kick from the backfield and swooped past his fellow sophomore pacing colts to provide trainer Lance Ward with consecutive wins in the $100,000 Western Canada Pacing Derby on Saturday afternoon at Northlands Park

When the wings of the gate folded, Gramrun Jake (Tim Brown) fired to command from post position three with longshot Steal The Diamonds (Travis Cullen) leaving from his outside seven post and getting parked out in second through a :27.4 opening quarter.

As the field raced in front of the grandstand for the first time, Steal The Diamonds found room at the rail to tuck into the pocket spot ahead of Bachelor Pad (Gerry Hudon), who was then flushed first up into the turn.

Gramrun Jake hit the half in :57.1 with Bachelor Pad on the move and his stablemate, Hollywood Warrior (Dave Hudon), second over. Battle River Storm (Kelly Hoerdt) was third over with Silver Eagle back in seventh on the outside.

Gramrun Jake proceeded to three-quarters in 1:25.2 while Bachelor Pad dropped into a gapping two-hole, leaving his advancing barn buddy uncovered into the final turn.

Meanwhile, Silver Eagle began to fan three-wide and found open road ahead at the top of the stretch. He sprinted home in :28-seconds to come on for the three-quarter length score. Gramrun Jake held on for second over Hollywood Warrior while Bachelor Pad finished fourth. Battle River Storm completed the cashers in fifth.

Silver Eagle's win gives Ward a perfect two-for-two record in Western Canada Pacing Derby history as he also won the previous edition in 2008 with his only other Derby starter, Neal Diamonique.

"The race kind of went like I expected it to; there were no surprises in there," said Tainsh after the victory. "The front end got [pressured] a little bit and he's got a huge kick for home this horse so we just took advantage of that and he ran them down. I knew he was ready. He was primed and he was ready. He was looking for that lane. The horse on the front end, Gramrun Jake, he got roughed up a little bit so I knew he would come back a little bit to us."

The Brandons Cowboy-Allamerican Viking gelding improved his sophomore record to 14-6-3 in 29 starts and pushed his earnings past the $200,000 mark for Ward and his Alberta co-owners, Joe Tinelli of St. Albert and the Shir Win Racing Stable of Edmonton. Among Silver Eagle's early season sophomore wins are the Adios Pick, Alberta Plainsman, Brad Gunn, and Red Serge Sales Stake.

“He did good. He got a little tired midway through the season and Lance has done a great job getting him back," commented Tainsh. "He was good today. He was sharp and on his game."

The connections of Silver Eagle are now contemplating sending the gelding to the Ontario racing scene after a rest. 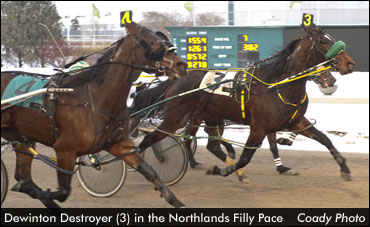 Earlier on the card, the race for 2011 Northlands Filly Pace title was won in the final strides with four sophomore fillies crossing the wire together in a win photo. When the dust settled, it was Dewinton Destroyer who prevailed in the thrilling $75,000 event.

Hall of Fame horseman Keith Clark drove the As Promised-Avacal Hope filly to the 1:55.4 score over the 'good' track.

Village Janus (Kelly Hoerdt) fired off the gate from the outside post position and was caught three-wide into the opening turn before rolling up to take the early lead ahead of inside starters Red Star Hannah (Tim Brown) and Shoplifter Hanover (Jamie Gray).

As the fillies hit the :27-second opening quarter mark, elimination winner and heavy 8-5 favourite Red Star Hannah moved out and around Village Janus and led the way to the half in :57.2.

Minettas Nightstar (Bobby Clark) launched a first over attack as they entered the backstretch with stablemate Dewinton Destroyer following her cover, Barona Josie (Bill Tainsh Jr.) third over, and elimination winner Just Fiction (Jim Marino) at the back of the pack.

Minettas Nightstar battled head-to-head with Red Star Hannah to three-quarters in 1:26.1 and began to edge out in front around the final turn while the trailers in the outer tier began to fan wide.

With four across coming to the wire, the stretch drive was one of the most exciting of the Northlands meet so far and Dewinton Destroyer will go down in the books as the champion, getting up to score in the final moments by a head over Barona Josie, Lance Ward trainee Just Fiction and Minettas Nightstar in the win photo. Early trailer Feeling Flush (John Chappell) finished two and a half length behinds in fifth.

"She's been a tough filly all year round. She kind of needs a trip and she got one today," said Clark, who also trains and co-owns the winner with Doris McDougall of Cochrane, Alta. "There was a lot of good fillies in there and it was the one that got the good trip that was going to win it."

After having gone winless in four freshman starts, Dewinton Destroyer has recorded 10 wins and seven seconds in 23 sophomore outings while banking $148,573.

Dewinton Destroyer paid $25.40 for the upset.