Give Chrome, a 12-year-old standardbred seized from his owner because of abuse on November 11, spent Christmas Eve tucked in at his new home at Walnut Hall Ltd. 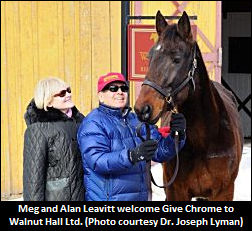 The pacer has been adopted by Meg and Alan Leavitt of Walnut Hall Ltd. in Lexington. The Leavitts made the decision when they learned of the horse’s abuse at the hands of his owner and subsequent seizure by the Adams County (Pennsylvania) SPCA on November 11.

Albert Adams, proprietor of Winterwood Farm in Ohio, with his son Mark, transported Give Chrome from Gettysburg, Pennsylvania to Walnut Hall Ltd. as a gift. They delivered the horse late on the evening of December 23.

Give Chrome is the 23rd horse helped by the USTA’s 'Support Our Standardbreds' (SOS) program, which provides financial assistance for horses seized, surrendered or abandoned to legal authorities.

The horse, nicknamed 'Roger' by SPCA authorities, was seized in Littlestown, Pennsylvania after multiple calls were made to 911 complaining of a man repeatedly whipping a horse on local roads. The horse was found to have 10-15 large abrasions where his hide rubbed off from an ill fitting harness, as well as a laceration on his leg. He was also underweight. 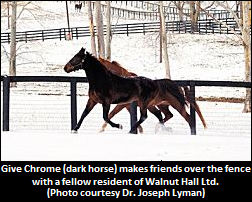 The person driving the horse, Wilbur Frost, has no permanent address and told officers he intended to drive the horse to Oklahoma. He was jailed and is also facing charges related to three guns in the makeshift cart being pulled by the horse. Frost has a prior conviction for abuse of horses in Kansas earlier in 2010.

“He is in better shape than one would have expected,” says Alan Leavitt. “All of his wounds have healed and he’s in pretty good flesh. He hasn’t stopped eating hay since he arrived. He loves to be out and he loves rolling, whether it’s in the stall or out in the snow.

“He immediately made friends over the fence with three other rescues (horses) who are in the field adjoining his paddock. Considering his ordeal, he is not bad at all to work around, a little edgy but no meanness whatsoever. He’ll soon be a real pet with the affection and Mrs. Pasture’s Cookies he’ll be getting from Meg.”

This story courtesy of Harness Racing Communications, a division of the U.S. Trotting Association. For more information, visit ustrotting.com.

In reply to That makes me sick!! You by Ben Paniccia

Can't blame this one on the

Can't blame this one on the industry. The horse was under the "care" of an individual who is not involved in the industry. That being said I applaud Levitt's for stepping up, giving this horse a nice home & great care!

Nice decent people would there were more of them,congatulations!!

the Leavitts angels here on

the Leavitts
angels here on earth.

That makes me sick!! You

That makes me sick!! You people are like angels to these horses and I tip my hat you.I

can't understand why people abuse horses period. I own a few horses and when I hear of abuse in any way it makes me dislike the industry.

Thank you, Mr. and Mrs. Leavitt, for providing Give Chrome with a caring home. No horse deserves the treatment that he received by his abuser. Your farm is a special place where I'm sure he will be well cared for. It's nice to read a "good news" story for a change.