Horses Rescued In A Christmas Miracle 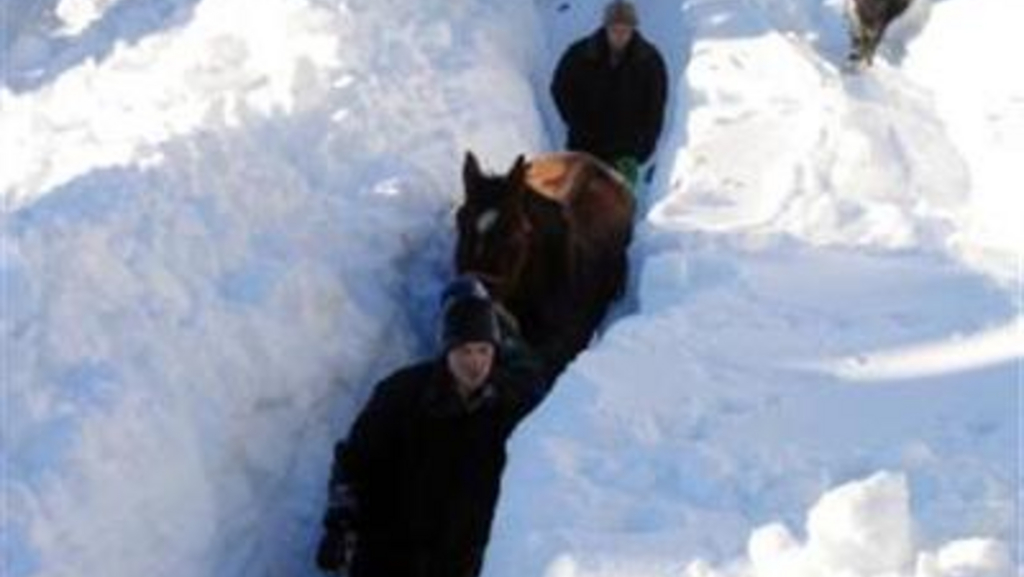 Two frostbitten, emaciated horses were recovering inside a warm barn on Saturday thanks to volunteers who spent the week before Christmas digging the animals out of snow in the mountains of northeastern British Columbia.

Birgit Stutz said Saturday the rescuers cheered when they finally finished digging a half-mile escape route through the snow for the animals. The horses had been abandoned by a hunter and faced almost certain death.

Stutz said the horses eagerly accepted being bridled and seemed to know they were safe as volunteers led them on a seven-hour hike down the mountain in freezing temperatures on Tuesday.

Stutz said about 40 or 50 people took part in the rescue over the course of a week.

"It was a big effort," Stutz said in a telephone interview.

Stutz said the horses were discovered on Dec. 15 by two local residents. They were above the tree line and had no shelter at first.

Logan Jeck and a friend stumbled across the horses while out looking for some snowmobiles left behind by tourists who had gotten stuck during a trip to the back country on the side of Mount Renshaw – about 750 miles northeast of Vancouver.

At first, the young men thought the most humane thing to do would be to shoot the emaciated horses to put them out of their misery.

"They went up to assess the situation and to decide whether they were going to shoot them or give them hay. They decided they had enough life in them so that's when it all started," Stutz said.

Over the course of a week, a growing number of residents trudged up the mountain with shovels in hand to dig out an escape pathway through six-foot-deep (two meter-deep) snow. Stutz said the volunteers had to dig a trench just over a half a mile long through the brush along the mountainside.

On Dec. 19, the local chapter of the Society for the Prevention of Cruelty to Animals sent up a couple of officers along with a veterinarian to consider whether the animals could be lifted out by helicopter.

Shawn Eccles, an animal-protection officer, said on a scale of 1 to 9, the horses' health rated about a 2.

The horses are now under a veterinarian's care and are being carefully fed and watered. "They're doing well," Stutz said.

Stutz said she and her friends spent so much time and effort on the rescue that they really didn't have time to prepare for the holidays. Her family did not even put up a Christmas tree, but no one is complaining.

"This is probably the best Christmas gift a person could have, to be able to get these horses out of there," she said. "Just knowing that we managed to help these poor creatures out there in the cold and get them to safety, it's a better Christmas than you could have otherwise."

I am very disturbed by

I am very disturbed by reading this page from Standardbred Canada. If someone cannot
take care of their horses they should turn them over to a Rescue Organization to prevent these things from happening. No excuse to leave unwanted animals to themselves in freezing temps. How dare them?

I hate to tell you folks but

I hate to tell you folks but unless the owner of the horses is charged with cruelty to animals and a court determines that the animals are to be seized, he has every right to retrieve them from the vet. He's responsible to pay reasonable vet bills however the vet is not entitled to keep the animals in lieu of payment or to hold them as collateral. British Columbia takes a far dimmer view of cruelty to both domesticated and wild animals than Ontario. If you want your voices to be heard (or read through email) I would encourage you to contact the Humane Society of British Columbia in order to obtain the email address of the applicable Humane Society office together with the email address of the their local newspaper and/or court office.

I was saddened and disgusted

I was saddened and disgusted that yet again this kind of cruel and malicious behavior is happening. I did have my faith in humanity restored when I saw the story about all those brave and caring people who worked to save these wonderful animals.I am appalled that in our society this is allowed to happen time and again to these defenseless creatures.
Will this loser's name be released,probably not...Will he get a slap on the wrist..likely..That is why these dregs of society continue their cruel and careless acts toward the defenseless(children & animals)...because the laws enable them.The people that we trust to enforce laws and dole out punishments need to know that most people in this country are not satisfied with the kind of justice that allows these crimes to continue. I personally would like to see his name released..I'm sure there is someone out there who believes in "an eye for an eye"!!!!!

DONT BE TO HARSH ON THE

How much is a horse worth?

How much is a horse worth? I've been in the horse industry 40+ years and the thoroughbred saddle horse I bought as a teenager was worth more then a similar mount today. Perhaps this is why people feel horses are not worth the investment of time, care and consideration. It makes me sick. You don't have to go into a remote, mountain area to see this type of negligent cruelty, I can just look down my own road! I hope the horses recover, prove to be useful, and have a comfortable life from here on. I also hope one day to find the value of horses again over $.50/lb.

I am sure all animal and/or

I am sure all animal and/or horse owners say THANK YOU - THANK YOU - THANK YOU to the many people who helped in this rescue.
Any person that owns and cares for horses or any animals must grow to love them and protect them. And if you don't , then you shouldn't own them...

I am totally outraged. This

I am totally outraged. This is unbelievable. He deserves to be left out there himself with nothing more than his underwear. He better get more than a slap on the wrist for this because I have heard simular animal cruelty stories and all they got was a fine and not able to have animals for 2 years. He should be sent to prison and never be able to own animals ever again. If this does not happen, I have lost all faith in humanity. People risked their lives to safe his animals that he left for dead. Also, this bastard's name better be released, because if it were you or I, you know that everybody in hell and creation would know who we were. I am appalled.
On a happier note, I am so glad that these horses were saved and the people that saved them deserve a metal. They are true humanitarians and it is so nice to hear that there actually people out there like them that actually have a heart. I had tears of sadness reading this story at first and then they were tears of happiness. I commend you all and I hope you all have a great New Year because I know you have made mine.
P.S. Could you please keep us posted on the health of the horses and where their home may be in the future.
Thank-you
Angela

Screw the fine and not being

Screw the fine and not being able to own animals again, this moron should be charge with attempted murder and get 20 years hard time in jail. My thanks go to all those who helped in the rescue effort of these animals.

I saw the T.V.news about

I saw the T.V.news about the horses . Thanks to all of those workers who helped to save the cold ,starving animals over Christmas. Who could be so cruel to abandon 2 animals to those freezing conditions?. S Charette-Redmond, Ottawa

I heard on the news today

I heard on the news today that the original owner of these animals wants them back! No way in h- e- double hockey sticks should this ever be considered. I truly hope that he acquires some very stiff fines instead. He should never be allowed to own any animals ever again! I wonder why his name has never been revealled either. Everyone should know who he is and what he did.

This is the kind of story

This is the kind of story that makes me smile. I am a owner of standerdbred horses and I love to win. However,horses should be treated in a fair manner. Hats off to these people.It's funny. I believe good things will happen to these people.