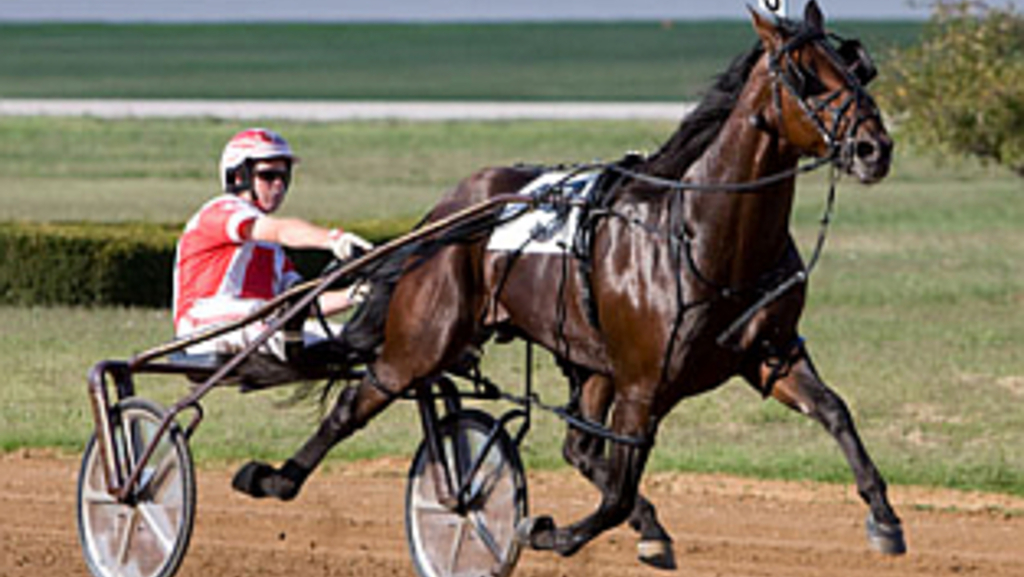 World champion three-year-old pacer Somebeachsomewhere is the CBC News-Nova Scotia Newsmaker of the Year and will be featured in a broadcast at 6:30 p.m. Atlantic (5:30 p.m. Eastern) on Friday.

The 30-minute show, hosted by CBC’s Jim Nunn, will include an interview with Somebeachsomewhere’s trainer/co-owner Brent MacGrath and highlights of the colt’s season.

“It’s a big thrill being the newsmaker of the year, especially with a horse,” MacGrath said. “Racing typically flies under the radar and doesn’t get the attention from mainstream media that we think it should. It’s a very big deal.”

Somebeachsomewhere won 14 of 15 races this year and earned a single-season-record $2.5 million. He won 20 of 21 lifetime starts and banked $3.3 million.

Only a loss to Art Official by a neck in the Meadowlands Pace, in a then-World Record 1:47 mile, separated Somebeachsomewhere from perfection. He finished his career by winning the Breeders Crown over Shadow Play in 1:48.3 last month. The time was the fastest in the race’s history, bettering Rocknroll Hanover ’s record by 1-1/5 seconds.

Earlier this year, he set the World Record for three-year-old pacers on a half-mile track and also equaled the fastest race mile in history with a 1:46.4 victory at Lexington ’s Red Mile.

Somebeachsomewhere’s 2008 wins included the $1.5 million North America Cup, the Messenger Stakes, the Confederation Cup and divisions of the Tattersalls, Bluegrass, Simcoe and Burlington . The colt, which was purchased as a yearling for $40,000, is owned by the Schooner Stables, located in Nova Scotia . He was driven regularly by Paul MacDonell.

I'm so old my first thrills

I'm so old my first thrills came from a Cape Breton Free for Aller who ventured as far west as Truro to take on Iola Henley, among others in the amazing times of 2:08 and a fraction. Now, we have the Beach, the greatest horse to grace our imaginations since Northern Dancer in 1963. Funny thing is that Northern Dancer got well deserved attention in the national media. Not so SomeBeach. I've tried since the North American Cup to get Maclean's, the so called "national Canadian magazine" to mention the pride of the east and have received not so much as a one line comment. Fortunately, I have the memory of a June night,the Mohawk track and a crowd of thousands on their feet when Somebeachsomewhere came off the final turn and into the homestretch - and a crowd of Maritimers flooded the track to congratulate their champion!

A couple years back on

A couple years back on P.E.I. I'm pretty sure Mark MacDonald was Newsmaker of the year, Harness Racing gets a little more mainstream attention in the maritimes.

Congratulations to Beach and

Congratulations to Beach and his connections.It's really nice to see such a dynamic athelete get the showcasing that he deserves. He's been such a boost to the Harness Racing industry, and it's such a pleasure to see positive things about our sport written, instead of all the negitive press that we get. All the best to Beach in his new position in our sport.

COME ON MEMBERS OF THE PRESS

COME ON MEMBERS OF THE PRESS - THIS STORY IS STILL ALIVE - TELL THE REST OF CANADA ABOUT THIS FABULOUS CANADIAN SIRED, OWNED, TRAINED AND DRIVEN ANIMAL. SOMEBODY EXPLAIN TO ME WHY STANDARDBREDS CAN'T GET THE PRESS THEY DESERVE. FOR YEARS I'VE SEEN THOROUGHBREDS AND SHOW JUMPERS ALONG WITH THEIR OWNERS TRAINERS AND RIDERS OCCASIONALLY MAKE HEADLINES IN THE SPORTS SECTION - SOMETIMES EVEN THE FRONT PAGE. SOME OF THEM (SECRETARIAT FOR EG) HAD LITTLE OR NO RELATIONSHIP TO CANADA - WHY THE HELL CAN'T HARNESS HORSES AND THEIR CONNECTIONS GET THE SAME ATTENTION?

Hey! A non-industry mainstream award for the Beach. Congratulations and keep 'em coming.