On Tuesday, December 20, Standardbred Canada announced the finalists for the 2016 O’Brien Awards, which honour Canada’s best in harness racing over the past season. 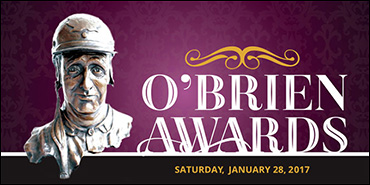 The winners will be announced at the annual O’Brien Awards Black Tie Gala on Saturday, January 28, 2017 at the Hilton Mississauga / Meadowvale Hotel in Mississauga, Ont.

This will be the 28th edition of the O’Brien Awards, named in honour of the late Joe O’Brien, an outstanding horseman and member of the Canadian Horse Racing Hall of Fame.

Twelve past O’Brien Award winners are looking to add to their trophy collections and are either defending titles or are nominated in a new division. Past winners include Caprice Hill, Flanagan Memory, L A Delight, Lady Shadow and Solar Sister in the horse categories as well as Casie Coleman, Travis Cullen, Sylvain Filion, Richard Moreau, Rick Zeron, the partnership of Marvin Katz & Al Libfeld, and Seelster Farms.

In the driver of the year category, Sylvain Filion, the leading money-earning driver so far this year, is up against Bob McClure, the leading dash-winning driver to date.

Sylvain Filion, a resident of Milton, Ont., won this award in 2012, 2013 and 2015. He’s driven 310 winners and leads all Canadian drivers in the earnings column with more than $7.7 million. Filion was the regular driver for a trio of O’Brien finalists -- Beyond Delight, Emoticon Hanover and Yaris Bayama.

Bob McClure of Elora, Ont., receives his first O’Brien Award nomination and is en route to a career best year. McClure leads all Canadian drivers in the wins column with 561 victories and has driven horses to more than $2.9 million in earnings. McClure is the leading reinsman at Flamboro Downs, sits in second at The Raceway at the Western Fair District, and won the dash winning titles at Georgian Downs and Grand River Raceway.

Casie Coleman and Richard Moreau, two of Canada’s top trainers will see if they can add to their respective O’Brien collections as this year's finalists for Trainer of the Year.

Casie Coleman of Cambridge, Ont., reduced her stable size this year to focus on her stakes performers. She conditioned 53 winners and horses who earned more than $2.8 million, including stable star and O’Brien finalist, Betting Line, a winner of $1.7 million, who also added North America Cup and Little Brown Jug victories to Coleman’s 2016 accolades. Coleman is looking for her sixth Trainer of the Year title.

Richard Moreau, of Puslinch, Ont., is the defending Trainer of the Year and is looking to take home his fourth consecutive O’Brien bronze. Moreau, who has been a regular on the Woodbine Entertainment Group (WEG) circuit for over 12 years, leads all Canadian trainers in the wins column with 249 wins to his credit and has trained the winners of nearly $4.0 million.

Travis Cullen, who relocated to Rockton, Ont., from Airdrie, Alta. near the end of September, and Rick Zeron, of Oakville, Ont., are the two finalists for the O’Brien Award of Horsemanship.

Veteran horseman Rick Zeron continues to successfully compete as a trainer and driver on the Woodbine Entertainment circuit. This year he’s driven 116 winners and horses to $2.6 million in purse earnings, while training 49 winners and horses to $1.7 million in earnings. Two of his trainees are O’Brien Award finalists -– two-year-old trotting colt Mass Production, and Older Pacing Horse Shamballa.

Idyllic Beach and Yaris Bayama are the nominees in the two-year-old pacing filly division.

Idyllic Beach hit the board in all of her 14 races, boasted eight wins and almost $730,000 in purse earnings. Major stakes wins for the Somebeachsomewhere filly included the Shes A Great Lady elimination and final at Mohawk Racetrack, along with the Kentuckiana Stakes at Hoosier Park, and the International Stallion Stake at The Red Mile.

Beyond Delight and Sports Column are the two-year-old pacing colt finalists.

The Bettors Delight colt Beyond Delight won three of 11 races and more than $423,000 for his connections. His three wins were major ones as he swept the elimination and final of the Metro and won a division of the Champlain Stakes, all at Mohawk Racetrack.

The Sportswriter colt Sports Column finished 1-2 in all six season starts for $222,000 in earnings. Victories included a sweep of the Battle of Waterloo elimination and final and two Ontario Sires Stakes events including one in July at Mohawk where the $20,000 yearling purchase posted a season’s best 1:52.1.

L A Delight and Pure Country compete for O’Brien honours in the sophomore pacing filly category.

L A Delight, an O’Brien champion at two, put together another stellar season as a sophomore, winning nine races in 19 starts and more than $787,000. She was perfect in the Ontario Sires Stakes events, sweeping six of six, including the season-ending Super Final. She posted a life’s best 1:49.1 in winning the Nadia Lobell at The Meadows.

Pure Country, a homebred daughter of Somebeachsomewhere scored 10 wins and bankrolled more than $1.1 million in her sophomore season to top the earnings chart in her division. She scored many stakes victories on both sides of the border and her richest payday of the season came in winning the Fan Hanover at Mohawk Racetrack in 1:49.3.

Betting Line finished the season with 14 wins and a second in 15 season starts to go along with almost $1.7 million in earnings. The Bettors Delight colt’s victories included the $1-million Pepsi North America Cup, the Battle of the Brandywine, the Milstein Memorial, the Little Brown Jug, the Simcoe Stakes, and a sweep of all of his Ontario Sires Stakes races, including his OSS Super Final.

Racing Hill hit the board in 14 of 16 races and racked up more than $1.6 million in earnings during a season that saw victories in the Hempt, the Adios elimination and final, the Messenger, the Tattersalls and the Breeders Crown Championship.

Lady Shadow is up for her second consecutive O’Brien Award in the Older Pacing Mare category. She put together another profitable season with 12 victories and more than $945,000 in earnings. She was strong throughout the season, sweeping the elimination and final of the Roses Are Red, the Milton Stakes, and the elimination and final of the Breeders Crown before capping her year with a win in the TVG FFA at The Meadowlands.

Solar Sister put together a solid season, winning four of 17 and more than $400,000. She took a mark of 1:49.4 in winning the Artiscape at Tioga Downs, which was also her biggest payday of the season.

The Older Pacing Horse pool always runs deep, and this year’s two finalists, Shamballa and Wiggle It Jiggleit were at the top of their game in 2016.

Shamballa boasted 11 top-three finishes in 19 starts for almost $440,000 in purse money. He took a mark of 1:47.1 in winning the US Pacing Championship and also picked up cheques in many stakes engagements.

Wiggle It Jiggleit, the sport’s richest harness horse this year with $1.8 million bankrolled, never finished worse than third in his 24 races which included 15 wins and a mark of 1:47.2 posted in the Graduate Final at The Meadowlands. The multiple stakes winner captured Canada’s oldest stakes event, The Canadian Pacing Derby at Mohawk Racetrack and also secured runner-up finishes in the Prix d'Été and Confederation Cup on Canadian soil.

On the trotting side, Ariana G and Magic Presto are the two-year-old filly nominees.

Magic Presto won four of nine races and netted more than $393,000 with wins in three Ontario Sires Stakes events. The daughter of Kadabra’s richest payday came in her final start of the season on November 19 when she trotted to a dominating win in the Goldsmith Maid at Woodbine Racetrack and collected $223,500 for her efforts.

The Muscle Mass colt, Mass Production, won five of nine races and more than $285,000 during his rookie campaign, earning him a nomination in the two-year-old trotting colt division. His victories included four Ontario Sires Stakes wins highlighted by a season’s best 1:54.4 stakes record effort in the OSS Super Final.

Caprice Hill, an O’Brien champion at two, put together another profitable campaign in 2016, with eight wins in 15 starts and purses in excess of $630,000 for her connections. She won three of four Ontario Sires Stakes events, the Casual Breeze, Simcoe Stakes and was runner-up in the Hambletonian Oaks.

Emoticon Hanover, won seven of 15 races and $604,000 while posting a mark of 1:53.1 in winning the OSS Super Final at Mohawk. She won four of six Ontario Sires Stakes events and also scored wins in divisions of the Simcoe and Casual Breeze. She ended her season with solid runner-up finishes in the elimination and final of the Breeders Crown.

The Muscle Hill colt Bar Hopping won nine of 19 races and more than $1.2 million in his three-year-old season, taking a mark of 1:51.4 at The Meadowlands. He won several major stakes, including a sweep of the Canadian Trotting Classic and the elimination and final of the Breeders Crown.

Marion Marauder, a winner of 10 of 15 starts, became the ninth Trotting Triple Crown winner in 2016 –- and first since 2006 –- by sweeping the Hambletonian, Yonkers Trot, and Kentucky Futurity. The son of Muscle Hill won the Goodtimes Stakes and a division of the Stanley Dancer Memorial en route to a season that amassed more than $1.5 million in purses, topping the North American earnings charts for all trotters.

Charmed Life and Hannelore Hanover were voted the Older Trotting Mare finalists. Charmed Life scored 15 top-three finishes in 24 races which included four wins along with $185,000-plus in earnings. She was a top preferred campaigner and placed in a handful of stakes events.

Hannelore Hanover won 17 of 20 races and earned $1.1 million in purses, leading all female trotters in earnings. Her victories included the Breeders Crown Mare Trot and the Hambletonian Maturity, where she defeated male rivals. She also beat the boys in the Centaur Trotting Classic in addition to winning the Armbro Flight Stakes, TVG Series championship for female trotters, Fresh Yankee, Muscle Hill, and Miami Valley Distaff. Her mile time of 1:51 in winning the Armbro Flight equaled the world record for a four-year-old trotting mare.

Flanagan Memory, a six-year-old son of Kadabra won six of 14 races including the Allerage, and the Breeders Crown Championship, and banked more than $663,000.

In the Armstrong Breeder of the Year category, Marvin Katz (of Toronto, Ont.) and Al Libfeld (of Pickering, Ont.) will be looking to defend their title against Seelster Farms, who won this award in 2006 and 2013.

What started as a partnership that focused on buying yearlings and racing horses has evolved into one of harness racing's most respected breeding enterprises for Marvin Katz and Al Libfeld. Horses bred by this partnership won 29 races and purses in excess of $1.3 million this season. Their top horses were O’Brien finalist Ariana G, Princess Aurora and O Narutac Perfecto.

Seelster Farms of Lucan, Ont., Canada’s largest commercial breeder, had horses that won 293 races and more than $3 million this past season. Their top performers were Mayhem Seelster, Nirvana Seelster and Tessa Seelster.

In just his second season of full-time driving, Brett MacDonald competes regularly at Rideau Carleton Raceway and has driven 100 winners and horses to nearly $500,000 in purse money. MacDonald finished second in the Quebec / Eastern Ontario Regional Driving Championship to earn his way into the National Driving Championship where he managed a solid fifth place finish.

The 2016 season marked the third year that Louis Philippe Roy drove in 100-plus races and he put together some phenomenal numbers, winning 233 races and driving horses to earnings of more than $1 million. Roy was the leading dash-winning driver at Hippodrome 3R and currently tops the charts for wins at Rideau Carleton Raceway.

One of the 24 horse nominees will be honoured as Canada’s Horse of the Year. The winners will be announced at the O’Brien Awards Gala on Saturday, January 28, 2017 at the Hilton Mississauga / Meadowvale Hotel in Mississauga, Ontario.

Here is a complete list of nominees and their respective owners:

Owned by West Wins Stable, Cambridge, ON, Christine Calhoun, Chatham, ON and Mac Nichol, Burlington, ON

Owned by Tom Hill, Hamilton, ON

Owned by Marvin Katz, Toronto, ON & Al Libfeld, Pickering, ON

Owned by Tom Hill, Hamilton, ON