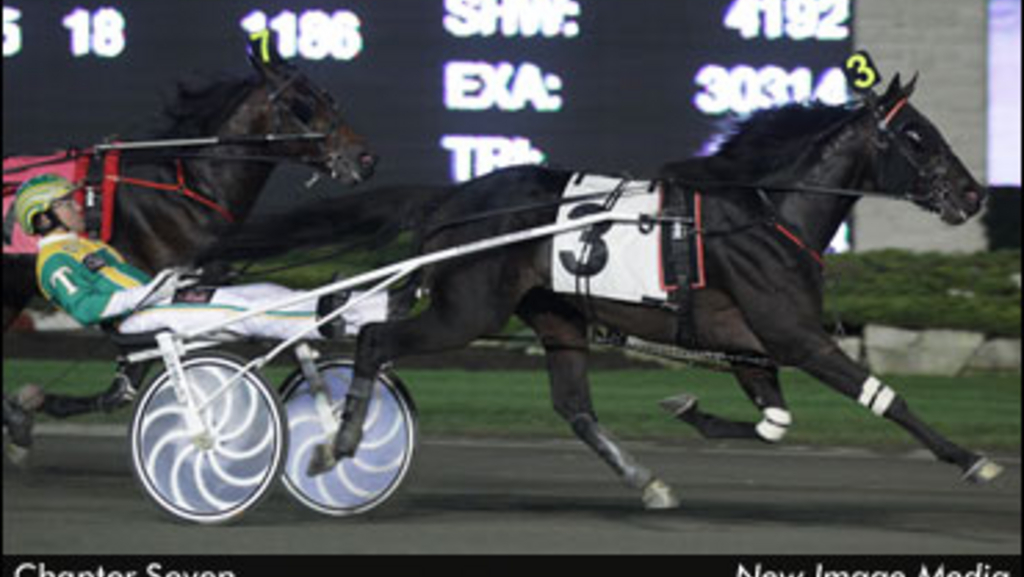 "The owners asked me if he can be better than he was [at three], and I think he can be. He’s a pretty good horse."

Chapter Seven ended his season on a roll and his connections hope it continues in 2012. Linda Toscano, who trains the three-year-old colt trotter, said Wednesday that owners Richard Gutnick, Gary Cocco, Southwind Farm and Jerry Silva decided last weekend to bring back Chapter Seven for his four-year-old campaign.

A son of Windsongs Legacy-La Riviera Lindy, Chapter Seven overcame sickness issues to win five of 10 races this year and earn $720,392. He won four of his last five starts, including the $610,000 Breeders Crown, and finished second in his lone defeat during that span.

“The closest night that we’ve seen him to perfect was Breeders Crown night. He just had one of those years that was so tough on the poor colt. The fact he could do what he did in spite of what he went through was a testament to the horse.”

Chapter Seven, who won seven of eight races and earned $211,549 as a two-year-old, saw this year begin slowly because of a bout with pneumonia. He made it to the races two weeks before the $1.5 million Hambletonian, winning his division of the Stanley Dancer Memorial. He was second in his Hambletonian elimination race and fourth in the final.

He missed the $500,000 Colonial because he got sick again, but returned five weeks after the Hambletonian to race in the Canadian Trotting Classic. He raced on the outside for his elimination, but advanced to the final with a fifth-place finish. He drew post No. 9 in the $1.02 million final and finished fifth.

At that point, the connections made a valuable decision. Rather than supplementing the horse to the Kentucky Futurity, which is contested in heats, they gave Chapter Seven time off and used the Bluegrass Stakes as a prep race for the Breeders Crown. The colt won his Bluegrass division in a career-best 1:52.4, then won his Breeders Crown elim and the final.

“Don’t you love it when a plan comes together?” Toscano said, laughing. “It actually worked really well. I give credit to the owners. They’re tops as far as doing the right thing for the horse. It’s really easy to get caught up in wanting to dance every dance and go to every race. I give them all the credit in the world.”