State Treasurer To Be Honoured Sunday 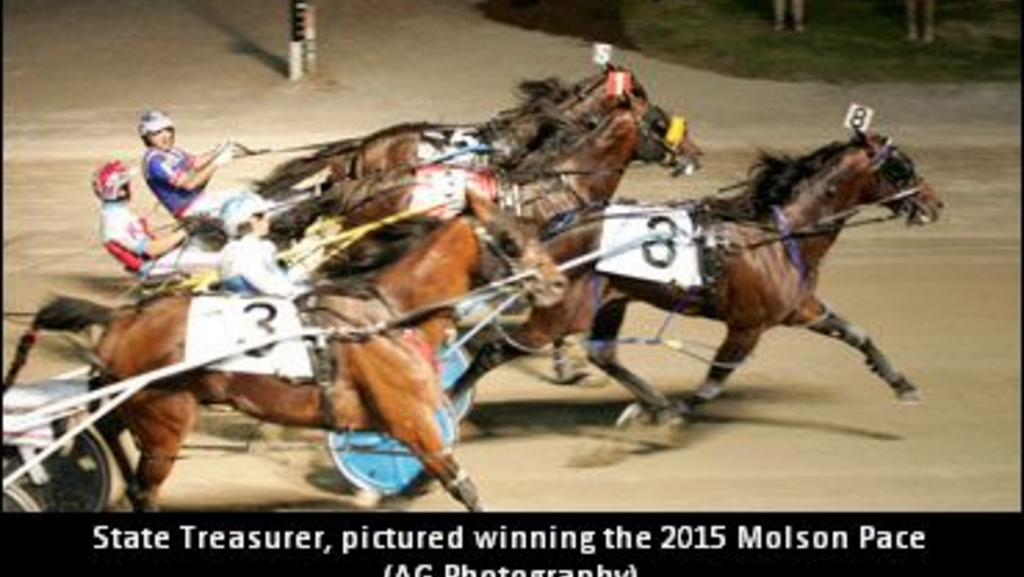 In addition to announcing that it has an action-packed month of racing this month, officials at The Raceway at Western Fair District have given notice that three-time Molson Pace victor State Treasurer will be honoured this Sunday (December 18) at the London, Ont. oval.

The month of December is traditionally a busy one at The Raceway at Western Fair District, and this year is no exception, as a total of 15 programs will be offered, including a special matinee program on Sunday, December 18 that will kick off with first post at 1:05 p.m.

Sunday will also be ‘State Treasurer Day’ at the races in honour of the three-time Molson Pace champion (2013, 2014, 2015) who was recently retired to stand stud at nearby Seelster Farms in Lucan. The world champion, who is a double millionaire, will be on hand to meet fans Sunday afternoon as part of the festivities.

The Raceway at Western Fair District has also planned a 16-race ‘super card’ on Friday, December 23 that will feature an earlier-than-normal start time of 5:30 p.m. Horseplayers will have more chances to take home some last-minute Christmas cash with the addition of a third Super Hi-5 and third Pick-4 wager. The Pick-4 pools that day will all be guaranteed at $10,000, while the early Pick-3 will feature a $5,000 guaranteed pool.

Fans are also reminded that the traditional Boxing Day program will go postward at 1:15 p.m. on Monday, December 26, as well as the New Year’s Eve program on Saturday, December 31 at 8:00 p.m.

There is still some limited seating at the Top of the Fair Restaurant for these dates. To make reservations, call 519-438-7203 (Ext. 252) or email [email protected].

(The Raceway at Western Fair District)

It was a real treat to have

It was a real treat to have 'The Champ' State Treasurer back with us one more time at The Raceway! His 2014 Molson Pace victory will always be one of my favourites - an incredible recovery to edge out Apprentice Hanover and Foiled Again... Wishing him all the best on his new career as a stallion with Seelster Farms!

I had to watch that

I had to watch that again.
clunk....sound of jaw hitting the floor.
2 points on this.
State Treasure in post 1 and starts out last. A rare miscue bobble by ST puts him there.
This win would not have been fathomable without the nice move by Chris to tip ST 3 wide down the back forcing Apprentice Hanover do do like wise giving Chris cover to the stretch.

Great to have this wonderful

Great to have this wonderful three-time champion back this Sunday! It is our way of saying thanks for the tremendous memories you have given the racing fans here at The Raceway, and throughout Canada and the U.S. Good luck in your new career, which I am sure will be as successful as your career on the track was. Hope we have tons of fans come out to give him a great send-off to the breeding shed.

Each time I watch it I have

Each time I watch it I have more appreciation for how remarkable his comeback win in 2014 was. Easily one of the greatest half-mile performances I've ever witnessed. It will be great to have him here one more time this Sunday!