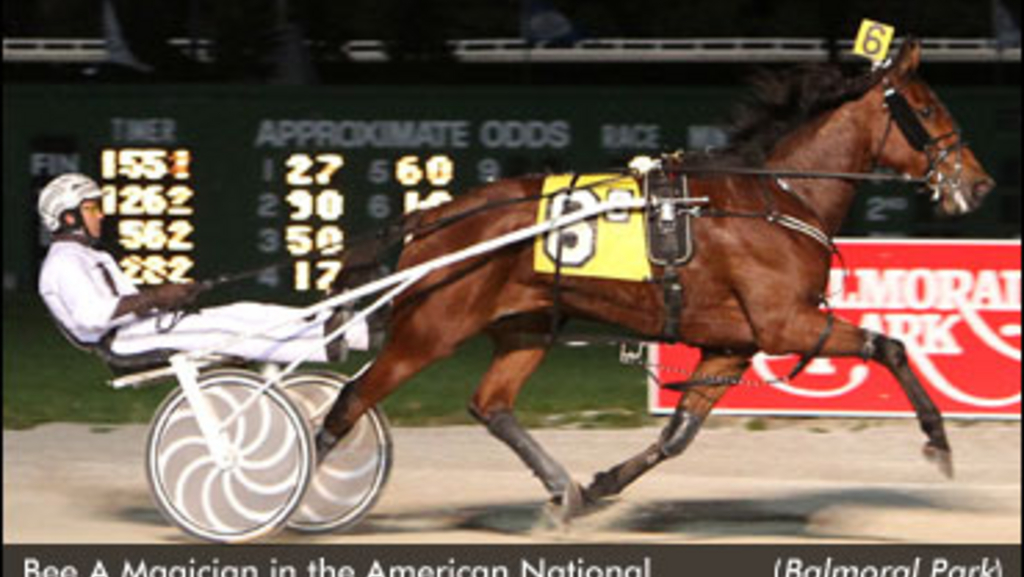 Beginning with big upsets, ending with some serious battles and throwing in a couple of track record performances in between, harness racing's stars put on an exciting show from start to finish in Balmoral Park's $1.3 million American National Stakes on Saturday night.

The stakes action kicked off with a major upset on Saturday night as 126-1 longshot Tough Rose prevailed from the pocket in a photo finish in the $115,000 American National for two-year-old pacing fillies.

Leaving from post seven, driver Andy Shetler left with Tough Rose and established the early lead before giving way to outsider Sweetnsinful (Jimmy Whittemore) into a :27.3 opening quarter. As Sweetnsinful led the field through middle splits of :56.1 and 1:25.4, heavy favourite Southwind Silence (Yannick Gingras) advanced first over from fourth. But Shetler was able to maneuver Tough Rose out between horses down the stretch with Sweetnsinful eventually breaking stride along the inside. Tough Rose then held off the late-closing Jaded Dream (Brett Miller) and Boxed Chocolates (Marcus Miller) for the 1:54.2 victory. Southwind Silence settled for fourth.

Overlooked by the betting public after an eighth-place finish from post 10 in the elimination, Tough Rose paid $254.60 to win. The victory -- her fourth in 15 starts -- more than doubled her bankroll, which is just shy of the $100,000 mark.

The United Ace filly is trained, owned and bred by Stanley Miller of Etna Green, Indiana.

Lets Drink On It went from last to first to win the following $113,000 American National for two-year-old pacing colts and geldings with Brian Sears aboard for trainer Joe Seekman.

Kingofthejungle (Mike Oosting) broke stride early on while trying to clear Unlocked (Dave Magee) leaving that colt on top past the :27-second first quarter mark. But Somesizesomestyle (Yannick Gingras) advanced to the lead by the half in :55.1 and proceeded to the third quarter station in 1:23 with Bushwacker (Tim Tetrick) advancing first over and Lets Drink On It moving into the outerflow from the backfield. Down the stretch, Unlocked emerged along the pylons to take the lead, but Lets Drink On It came charging up on the grandstand side to prevail in 1:51.2. Unlocked settled for second one length behind with the winner's stablemate, Wicked Business (Travis Seekman), coming in third.

The Art Official colt is now five-for-12 in his career with earnings climbing to nearly $178,000 for owners Martin Scharf, Larry Bond, and Hal Hewitt.

Lindys Tru Grit was the widest of all turning for home in the $235,000 American National for three-year-old trotting colts and geldings and closed with a fury for the 1:53.3 career-best victory.

The 11-1 upset winner returned $25 to his backers as he rebounded from a break in stride in last week's Erskine Consolation at Hoosier Park. Tim Tetrick worked out the winning trip for trainer Frank Antonacci.

Creatine (Mike Lachance) cleared to command early on before the wide post 10 starter, Spider Blue Chip (Ron Pierce), rolled up to take over command past the :27.3 first quarter mark. Spider Blue Chip reached the half in :55.2 with Rossini (Peter Wrenn) parked and pressing first over. Spider Blue Chip maintained the lead past three-quarters in 1:25, but the backfield began to fan wide into the stretch. Pine Credit (Marcus Miller) rallied off cover with third over Lauderdale (David Miller) and an even wider Lindys Tru Grit charging up on the far outside. Lindys Tru Grit out-sprinted his rivals to the wire with Creatine coming in second and Lauderdale finishing third.

“There was a lot of speed early and the speed isn’t holding up,” said Tetrick in a post-race interview. “My horse is fresh at a time in the season when a lot of horses have been racing hard and aren’t fresh. I wanted to make sure my horse didn’t run and tonight he was super solid.”

The lightly raced Cantab Hall colt, who notched his fifth win of the season in 14 starts, is owned by breeder Lindy Racing Stable and partner Robert Rudolph. His career earnings climbed over the $300,000 mark.

The following $200,000 American National for open trotters featured a battle of Breeders Crown champions. Double millionaire Market Share wore down millionairess Maven, the lone mare in the field, during a 1:52.1 track record mile, carrying Tim Tetrick back to the winner's circle.

The outsiders, Mister Herbie (Brian Sears) and Uncle Peter (David Miller), traded turns on the front end during the :28-second opening quarter, but Maven (Yannick Gingras) swept up from fourth to take the leading role by the :56.3 half-mile mark. She led the way to three-quarters in 1:24.4 with Market Share moving underway from third to apply first over pressure. The top two battled head-to-head down the stretch with Market Share eventually edging ahead for the one length victory. Maven stayed for second and Mister Herbie finished third.

Linda Toscano trains the four-year-old son of Revenue S, who paid $4.60 to win as the favourite. He earned his second straight American National title.

“He’s a nice little horse and he’s a great money maker so you can’t beat that,” said Tetrick. “I took a chance coming out, but it worked out. My horse is real handy and Maven is a great filly -- and she’s not easy to get by -- but my horse is just awesome. I think he’s peaking at the right time.”

The victory was Market Share's fifth in 12 seasonal starts and 20th lifetime for owners Richard Gutnick, the T L P Stable, and William Augustine. He's earned $833,501 of his $2.85 bankroll this year.

Charisma Hanover put an end to I Luv The Nitelife's 12-race win streak as she prevailed in a stretch duel to set a new track record of 1:49 for three-year-old pacing fillies in their $161,000 American National.

Fresh off a victory in the Lady Maud last weekend at Yonkers Raceway, Ron Burke trainee Charisma Hanover paid $7.80 to win as the 5-2 second choice.

“Earlier in the year we were leaving pretty hard with her and I really wanted to follow Tim [Tetrick, driving I Luv The Nitelife],” said Gingras after the victory. “It’s a long stretch here and I couldn’t wait for the wire to show up quick enough. But both fillies really put forth a great effort tonight and it was exciting to get a track record out of it.”

The Dragon Again filly is now 12-for-18 this year with seasonal earnings soaring to nearly $550,000 for owners Burke Racing Stable LLC and Weaver Bruscemi LLC.

Superstar sophomore trotting filly Bee A Magician kept her streak rolling in the next $118,500 American National with Brian Sears working out the winning trip for trainer Richard 'Nifty' Norman.

The daughter of Kadabra is now undefeated in 16 seasonal starts.

Leaving from post six, Bee A Magician bypassed a spot along the pylons in fourth and worked her way to the lead past the :28.2 first quarter mark. However, she gave way to an on-rushing Frau Blucher (Ron Pierce) during the second panel. The new leader carved out middle splits of :56.2 and 1:26.2 with Handover Belle (Tim Tetrick) advancing first over. Frau Blucher continued to lead the field into the stretch with Bee A Magician looking for racing room at the pylons. The popular filly was able to find a seam up the inside late and surged by for the one and three-quarter length victory in 1:55.2. Andie Sophia (David Miller) came on for second over Handover Belle. Frau Blucher was fourth-placed-fifth for causing interference to Lady Laker (Mike Oosting) in deep stretch.

“I really wanted to control the race, but because of the wind I thought it was good to take a seat around the turn,” said Sears of his racing strategy. “She was comfortable until the last eighth, but was able to slide down on the inside and get the job done. She’s the best filly I’ve ever driven, no question. She’s a handy filly and likes racing off the pace much more than off the front. But being that she’s usually the favourite, she’s been on the front a lot. She’s tested every week and it’s not that easy to do that week after week.”

Bee A Magician has added $1.44 million to her bankroll during her perfect sophomore season for owners Melvin Hartman of Ottawa, Ont. and Florida partners Herb Liverman and David McDuffee.

It was another close call for Captaintreacherous, but the popular sophomore pacing colt bounced back from a rare loss in last week's Monument Circle to win the next $256,000 American National.

"He scares the crap out of me all the time," laughed driver Tim Tetrick in the winner's circle after the half-length victory over Lucan Hanover.

Tetrick sent Captaintreacherous around early leaver Word Power (Brian Sears) past the :27.1 opening quarter mark after the challenging Eddie Sweat (Peter Wrenn) broke stride. Captaintreacherous then led the way past the half in :55.2 and three-quarters in 1:22.3 with Lucan Hanover (David Miller) moving up alongside. The leading duo continued to battle head-to-head into the stretch, but Captaintreacherous fought off Lucan Hanover for the victory in 1:49 flat. The winner's stablemate, Wake Up Peter (Scott Zeron), came on for third.

“When I first started out, this was the kind of horse I dreamed about,” said trainer Tony Alagna. “It’s just super to come back to my hometown and be treated so well. Last week he tied up at Hoosier and he trained well this week and his blood work came back well, so I felt much better about his chances tonight after he warmed up.”

Alagna trains the Somebeachsomewhere colt, who is 13-for-15 this year with his seasonal earnings soaring over the $2 million mark and lifetime bankroll now just shy of the $3 million plateau.

Myron Bell, part of the Captaintreacherous Racing ownership group, indicated that the connections are "leaning towards" sending the sophomore up against aged pacers in the TVG Championship Series on Nov. 30.

"It's always up to the trainer and driver," he said. "But we're going to see how he comes out [of this race]."

The heavy favourite paid $3 to win.

Pet Rock rallied home from off the pace to win a three-across finish over fellow divisional heavyweights Foiled Again and Warrawee Needy in the final $200,000 American National of the night for open pacers.

“I was just waiting to see what was going to happen at the start and a bunch of them left early,” said Miller after the victory. “They were down to the half in pretty good shape. He’s a tremendous horse and never ceases to amaze me. Those last few steps tonight were really amazing.”

Pet Rock defeated Foiled Again by less than a length for the second straight week. He won the Hoosier Park Pacing Derby after being edged out by his rival in the Breeders Crown.

The four-year-old son of Rocknroll Hanover is trained by Virgil Morgan Jr. for owner Frank Bellino of Bronxville, New York. The win was his sixth in 17 seasonal starts and lifted his earnings to $983,584 this year and $1.99 million lifetime.

(With quotes from Balmoral Park)