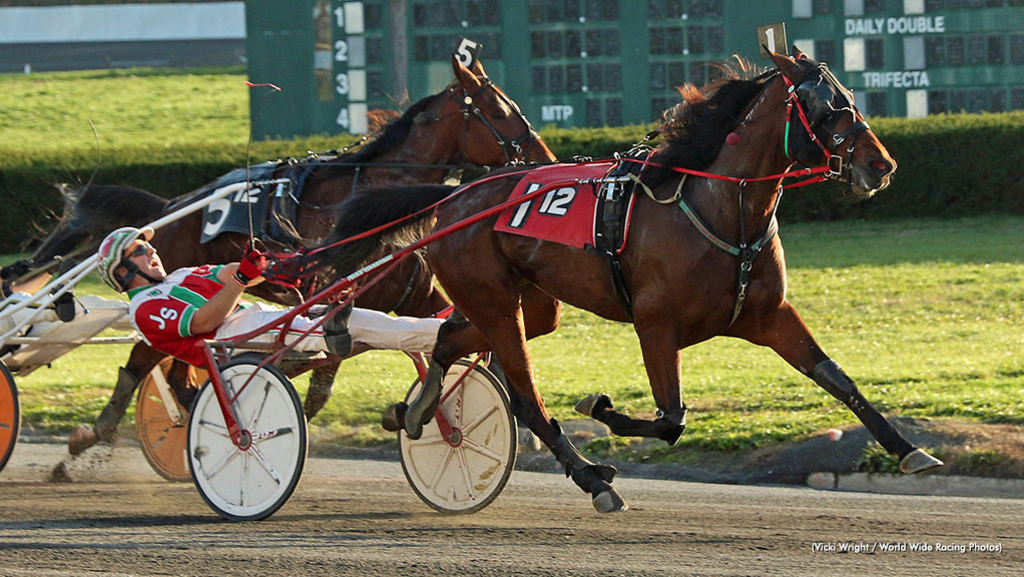 In the first division, Shoemaker Hanover and John Calabrese were able to avoid trouble at the head of the stretch and cruise home for the victory in 1:59.2.

Crazy About Pat (driven by Tony Beltrami) left strong and lead the field of trotters for most of the race. Call Me Thefireman (Tony Verruso) came first up and John Calabrese wasted no time guiding Shoemaker Hanover to the outside, where he sat second over for a bit but then made a strong three wide bid up the back. Absolut Uncertenty (Paul Minore) was loaded with trot in the pocket and waited for the moment he could get into the passing lane. Unfortunately, that moment never came as Crazy About Pat broke stride just coming off the last turn jamming up the horses behind him. Excellent driving skills by the amateur reinsmen averted any major trouble. Shoemaker Hanover, who was three wide, avoided all the trouble and opened on the field. Call Me Thefireman, who was slightly interfered with, was able to steer around the confusion and take the place spot. Absolut Uncertenty, who got the worst of the interference, got back trotting and was a fast closing third.

Shoemaker Hanover, a nine-year-old Cantab Hall horse, is owned by Calabrese Farms and Michelle Rickey and is trained by John Calabrese. Shoemaker Hanover was sent off the luke warm favorite and returned $7.40 on the win end.

In the Saturday finale, CHF Merodona (Jake Stillwell) used his inside post position to his advantage and wired the field tripping the timer in 2:00.2.

Fusion Power (Paul Minore) and Southern Swan Man (Dawn Anderson) took early shots at the pylon sitter, but they were both handed a parking ticket by the fast-leaving winner who blazed through the opening quarter in :28.2. With two horses hung the mile, Stillwell used that to his advantage and stacked up the field in the third quarter. Grafenberg (Joe Faraldo) sat the pocket and looked like he might have a shot at the top spot, but CHF Meradona kicked away at the top of the lane and held on for an easy length victory. My Big Kadillac (Mike Polansky) slipped out from third on the rail and stormed home for the place money with Grafenberg holding on for the show dough.

CHF Merodona, a five-year-old Muscle Mass mare, is owned by Eugene Landy and trained by Vinny Ginsburg. The bettors were sharp in this heat also and sent CHF Merodona off as the favorite returning $5.80 to the crafty backers.

The AHDC returns to the Freehold oval next Saturday (Nov. 12) for more exciting amateur trotting action.