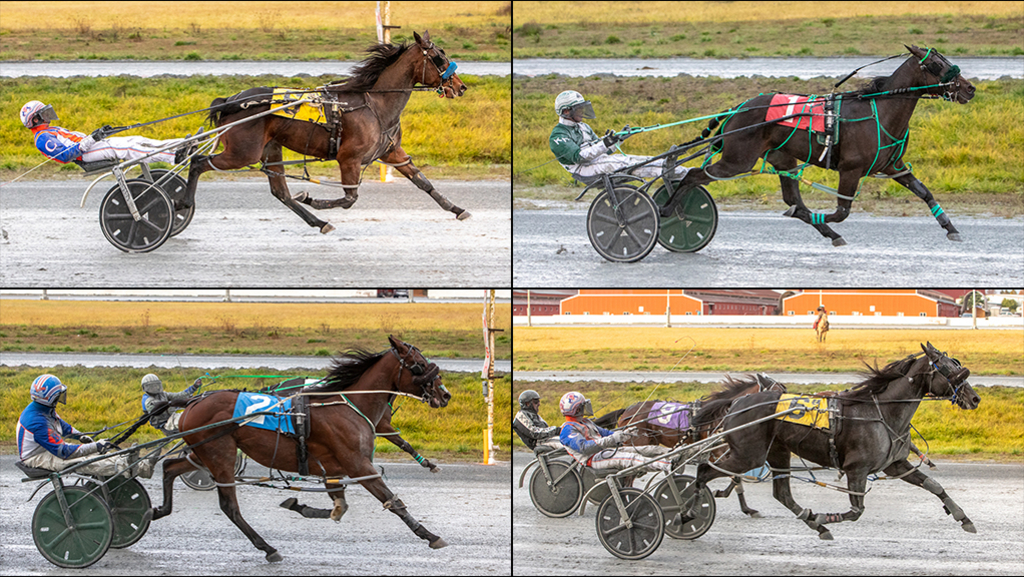 Despite the Sunday afternoon showers, the stars of British Columbia racing were out for B.C. Breeders Classic Day, the richest day of harness racing in the province, on Nov. 6 at Fraser Downs, including full brothers Mickie Mantle and Joe Dimagio, who swept the male pacing finals.

Side Piece was the showpiece of the Betty Millbank Memorial for trainer Jim Marino and breeder J J J Stables as the two-year-old pacing fillies kicked off Sunday's stakes action. 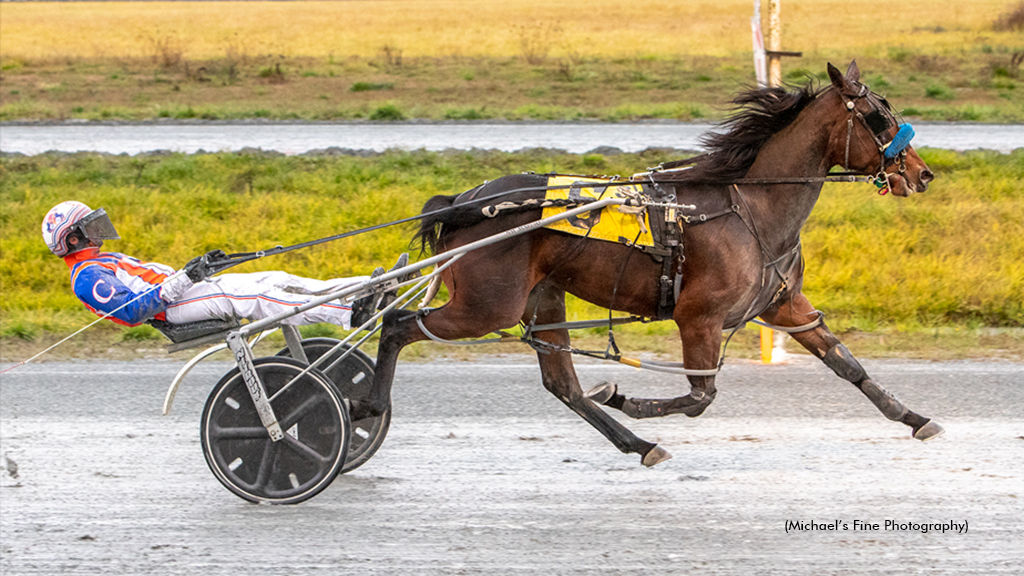 Sent postward as the 2-5 favourite off two consecutive preliminary wins, Side Piece and driver Brandon Campbell settled into fourth early on while her stablemate, Snowpeak (Dave Kelly), established the lead though a :29.1 opening quarter over the 'good' track.

Custard Or Nothing (Rod Therres) recovered from an early miscue then moved underway from the back of the six-horse field towards the clubhouse turn and pressed the leader past the half in 1:00.2 and down the backstretch to three-quarters in 1:29.

Meanwhile, Campbell moved Side Piece second-over in perfect striking position on the backside and sent the popular filly three-wide off the final turn to pace away to a four-length victory in 1:58.4. Center Piece (Scott Knight) closed from the backfield to give Marino and J J J Stables a one-two finish in the final while the pocket-sitter, Heart Of A Dragon (Kelly Hoerdt), also co-owned by Marino and trained by Ashley Ederer, shot though the passing lane to take third.

Side Piece, a daughter of Shadow Play out of the Artsplace mare Queen Otra, is now four-for-six with her earnings soaring to $74,600.

Mickie Mantle completed a sweep of the Robert Millbank Memorial for two-year-old colts and geldings with a wire-to-wire victory in the final. 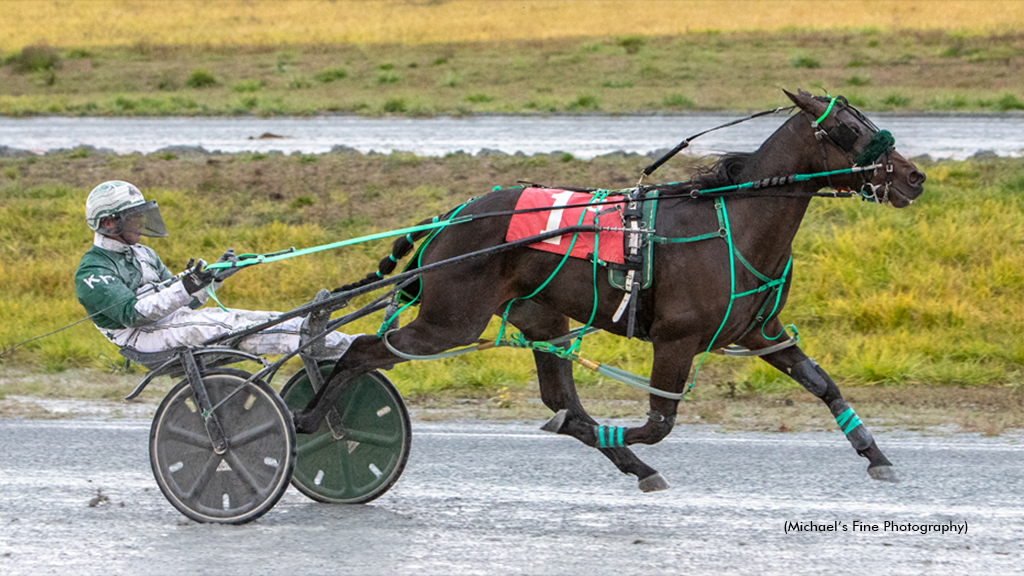 Driven by co-owner Kelly Hoerdt, 3-5 favourite Mickie Mantle left from the inside post and pocketed Son Of A Beach (John Abbott) in the first turn. Mickie Mantle reached the opening quarter in :28.1 and cruised unchallenged to the half in :58.1 and three-quarters in 1:27.2 before pulling away from the competition down the stretch for the 3-1/4-length victory in 1:56.3.  There was a three-horse race for place with Lukes Proclamation (Mike Hennessy) getting the nod over the Rod Therres trainees, Dillon James (Therres) and Son Of A Beach, for conditioner John Hudon.

Mickie Mantle earned his fifth straight victory, completing a flawless stretch through the four preliminary legs and the final for Hoerdt, who had a series sweep just once before in 2019 with Kneedeep N Custard in the three-year-old colt division.

The Alberta horseman co-owns the Custard The Dragon-N Y Yankees colt with Fred Gilbert of Brandon, Man., while Chris Lancaster has handled the training duties for Mickie Mantle's perfect stakes campaign in B.C.

Bred by Surdale Farms Ltd. of Kelowna, B.C., Mickie Mantle was a $27,000 purchase from the ASHA Yearling Sale and has now earned $88,098 through eight career starts.

Mike Hennessy worked out the winning trip, partnering with the late-developing sophomore gelding, who had a pair of seconds and a third in three preliminary legs. 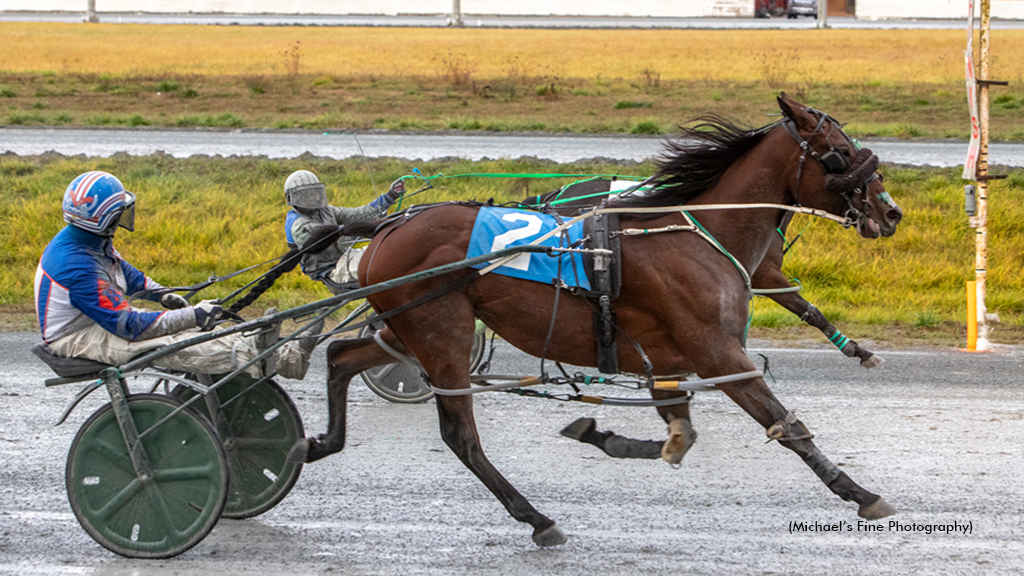 Joe Dimagio is trained and co-owned by Kelly Hoerdt along with Blair Corbeil of Beaumont, Alta. Hoerdt also shares ownership of all top three finishers in the final including runner-up Lets Tie One On, who just missed by a head in the photo for win with Scott Knight driving for trainer Chris Lancaster.

As the wings of the gate let the field go, Joe Rich (Brandon Campbell) forged to the front from post seven and was stretched out into the front stretch through a :26.4 opening quarter.  He cleared 7-5 favourite Itll Be Fine (Richard Lancaster), with Joe Dimagio following in third, but Lets Tie One On quickly rushed up from fourth to first as they passed in front of the grandstand for the first time.

After a :57 half, Itll Be Fine went head-to-head with Lets Tie One On while Hennessy had Joe Dimagio hot on his heels, positioned second-over.

Lets Tie One On battled back to three-quarters in 1:25 and turned for home with a two-length lead but Joe Dimagio went wide and was charging hard down the lane to catch his stablemate at the wire in 1:54.3. Chuck You Farlie, trained and driven by Hoerdt, rallied off cover to finish third.

Also bred by Surdale Farms, he has won one-third of his 18 races this year, boosting his career win count to eight and his earnings to $150,386 in 26 starts. 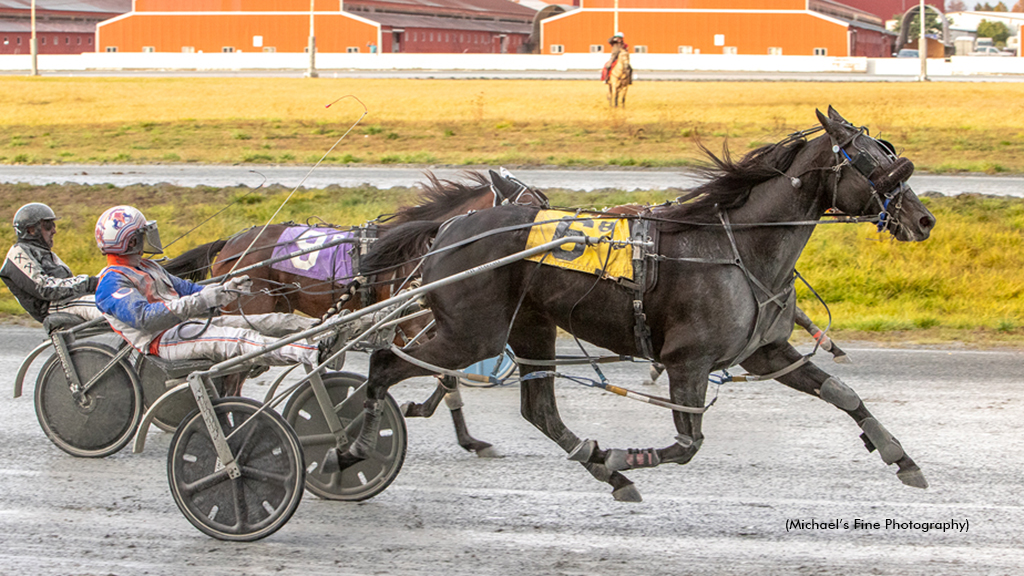 Outlaw What If CC (Scott Knight) and Angelsonthehorizon (Rod Therres) left together from the inside posts with the latter filly pressing on to clear before the first turn.  After a :27.3 opening quarter, Outlaw What If CC looped to the lead in front of grandstand the first time and proceeded to the half in :57.1 before Gotta Wear Shades (John Vukelich) went first-up from third with Shoot The Whiskey following the cover in fourth.

Gotta Wear Shades confronted Outlaw What If CC on the way to three-quarters in 1:26.1 and edged ahead in the turn with the favourite ready to roll three-wide in the race to the finish.

Shoot The Whiskey, who was fifth from the trailing tier in the Betty Millbank final as a two-year-old, opened this series with three wins and finished second in the fourth prelimnary leg. She is now eight-for-12 this year and has a dozen wins and $162,678 in earnings through 20 career starts.

Bred by Larry Hanson of Emerald Park, Sask., the Shadow Play-Arm In Arm filly was a $26,100 yearling purchase from the B.C. Sale.

The weekly $10,000 Open Pace followed the B.C. Breeders Stakes and Kevin Anderson's Waitin Ona River beat 1-5 favourite Armycaptin Hanover (Kelly Hoerdt) to the wire in 1:54.1, returning $35.20 for the 16-1 upset. The 10-year-old JK Royal Flush-Daylon Ara gelding picked up his second win of the year and his 21st victory lifetime as he closes in on the $200,000 earnings mark. Tiempo Hanover (Brandon Campbell) rounded out the top three, finishing one length behind.