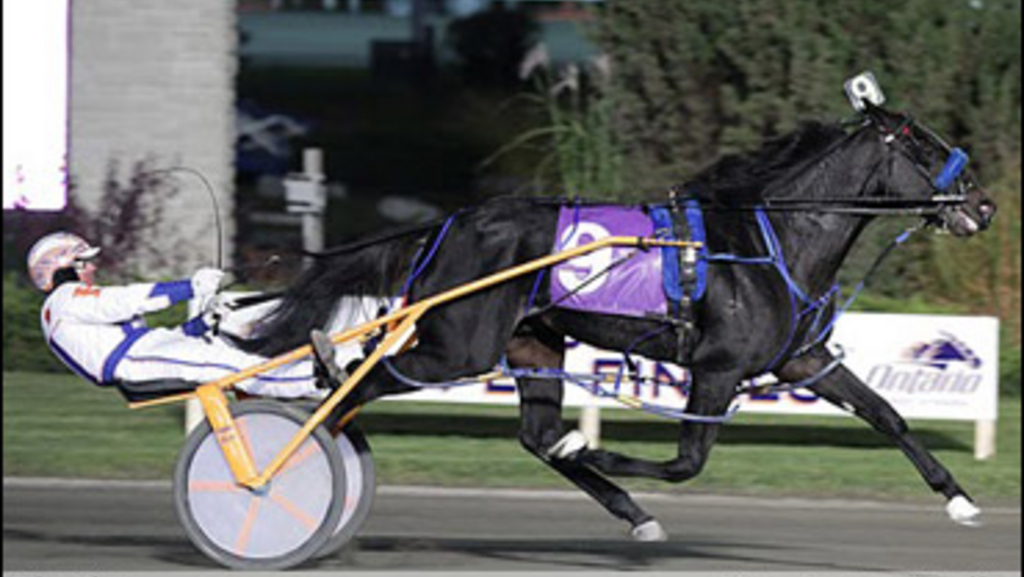 Crys Dream made a quarter pole move and blazed to a 1:54.3 track and stakes record in the $502,000 Goldsmith Maid for two-year-old trotting fillies.

Cedar Dove (Ron Pierce) crossed over from the outside Post 10 off the gate to establish the early lead well before the first turn. She hit the opening mark in :27.1 as heavy favourite Crys Dream, driven by Luc Ouellette, made her move from third.

Crys Dream swept to command down the backstretch and reached the half in :56.3 followed by three-quarters in 1:26.2 with the parked out L A Freeway (Paul MacDonell) looming from first over.

Crys Dream sprinted away down the stretch as Cedar Dove pulled the pocket with an eighth-of-a-mile to go. Crys Dream was too fast to catch though as she hit the wire in 1:54.3 with a half-length to spare. The time of the mile set a new stakes record, lowered her own track record of 1:55.1 set in the Goldsmith Maid elims, and just missed Snow White’s Canadian record by one-fifth of a second.

Cedar Dove was the runner-up with L A Expressway nearly eight lengths back in third.

Crys Dream paid $2.30 to win as the 1-9 favourite. The Taurus Dream-Crystas Image filly is now seven-for-eight in her young career with wins in the In Free Trotting Series, Champlain Stakes, Peaceful Way Stakes and now Goldsmith Maid. She is trained by Henrik Hollsten for breeder Reve Avec Moi Dreamwithme of Knowlton, Que., Deo Volente Farms LLC of Flemington and T L P Stable of Kearny, New Jersey. The lion’s share of the purse lifts her bankroll to $596,065.

Idyllic carved out fractions of :27, :56.1 and 1:24 while Strike An Attitude (John Campbell) launched a first over attack from third. The daughter of American Ideal-Magical Dreamer paced strong around the final turn and dug in to hold off her rivals for the 1:51 score. Strike An Attitude finished a half length behind with third-place finisher Pretty Katherine locked in the pocket.

“She was pretty fresh the whole time scoring in behind the gate and they weren’t really going much out of there so I went ahead and moved earlier than what I probably could have,” said Miller in the winner’s circle.

“She felt strong the whole way. The whole way she had a good hold of me and the last turn I started letting her pace. I was still worried about the seven horse [Strike An Attitude] -- I know that filly can kick home pretty strong –- and at the top of the stretch I asked her and she just dug in and she dug all the way through the stretch.”

Sent postward as the 5-2 third choice, Idyllic paid $7.10 to win. She is now eight-for-nine in her career with victories in the Eternal Camnation, Shes A Great Lady, Champlain and now the Three Diamonds. Idyllic boasts earnings totaling $805,829 for the West Wins Stable of Cambridge, Ont., Michael LaCova and Joseph LaCova of West Islip, New York and John Campagnuolo of Loxahatchee, Florida.

Blue Porsche set a new stakes record and lowered his own track and Canadian record by virtue of a 1:54.1 performance in the $539,000 Valley Victory for two-year-old trotting colts.

Whiskey Tax (Randy Waples) was the early leader from the rail, taking the field to the first quarter in :27.3. The Evictor (David Miller) rolled up to take over past the first marker with Blue Porsche and Trevor Ritchie hot on his heels and clearing at the :57.1 half.

Blue Porsche led the field past three-quarters in 1:25.4 while his fellow elimination winner Luckycharm Hanover (John Campbell) applied first over pressure before ducking into the pocket down the stretch leaving him to fend off the late-closing Pastor Stephen (Yannick Gingras) for the 1:54.1 triumph.

Pastor Stephen finished one length behind with Luckycharm Hanover two and a quarter lengths back in third.

“The weather was much better tonight and there was far less wind,” noted Bob Burgess, who co-owns with trainer Blair Burgess’ wife, Karin Olsson Burgess.

“This is a modest size colt. This is a June 16th colt -- he’s a good size for that but he’s never going to be a great big horse,” said Burgess of the Glidemaster-Machita colt, who was a $22,000 buy back last year at the Harrisburg Yearling Sale. “At the sale nobody wanted him because he was a June 16th colt and I named him originally after my car so they didn’t like that either I guess so no one bid on him.”

The end result has worked out in the Burgess’ favour as Blue Porsche has recorded five wins in nine outings earning $405,661 so far in his career. He also boasts wins in the Champlain Stakes and Bluegrass Series.

Blue Porsche paid $4.30 to win as the bettor’s choice.

Arsenal (Randy Waples) got off to a good start but Phil Hudon had Big Jim, who accepted a bye to the final, on the move early rolling up to take over from Post 9 at the :26.4 opening quarter.

Big Jim gave way to Fashion Delight (David Miller) down the backstretch and the new leader was faced with immediate pressure from elimination winner Shadyshark Hanover (Jody Jamieson). The top pair battled to three-quarters in 1:22 with Fashion Delight refusing to let his rival clear.

Shadyshark Hanover eventually pulled out in front in the stretch but Big Jim came charging up to take all the glory with a :26.3 final frame. He surged to victory in 1:49.1, lowering Rocknroll Hanover’s track record by three-fifths of a second and Sportswriter’s world record by one-fifth of a second.

Shadyshark Hanover finished one and three-quarter lengths behind in second over Fashion Delight.

“I knew I had the right horse, I was worried about the post but it all worked out pretty good,” said Hudon in the winner’s circle. “I was really happy when I saw Dave make Jody work for it and then I snuck out around the last turn. It just couldn’t have worked out any better.

"I knew he could go a big, big mile. He did it pretty handy most of the times, I didn't chase him but today I thought he deserved a record so we went for it."

Saturday’s card also featured the $100,000 Gold Cup Invitational Pace for older horses, which saw Foiled Again survive a long first over journey to prevail in a stakes record time of 1:48.3.

Mr Saratoga (Rick Zeron) left alertly from Post 8 with Lucky Man (Mark MacDonald) sweeping up to take over at the opening quarter in a flashy :25.2. Lucky Man carved out middle fractions of :55.3 and 1:21.4 while Foiled Again and Yannick Gingras advanced first over.

Foiled Again went head-to-head with Lucky Man into the stretch before kicking away by two and a quarter lengths to equal his career mark of 1:48.3. The winner’s stablemate, Atochia (Jody Jamieson), rallied from the backfield to place over Lucky Man.

Foiled Again paid $6.90 to win as the 5-2 second choice. The six-year-old son of Dragon Again-In A Safe Place is trained by Ron Burke for the Burke Racing Stable LLC, Weaver Bruscemi LLC and JJK Stables LLC. The victory was Foiled Again’s eighth in 22 starts this year and lifted his earnings to $892,365 for 2010 and $1.98 million lifetime.