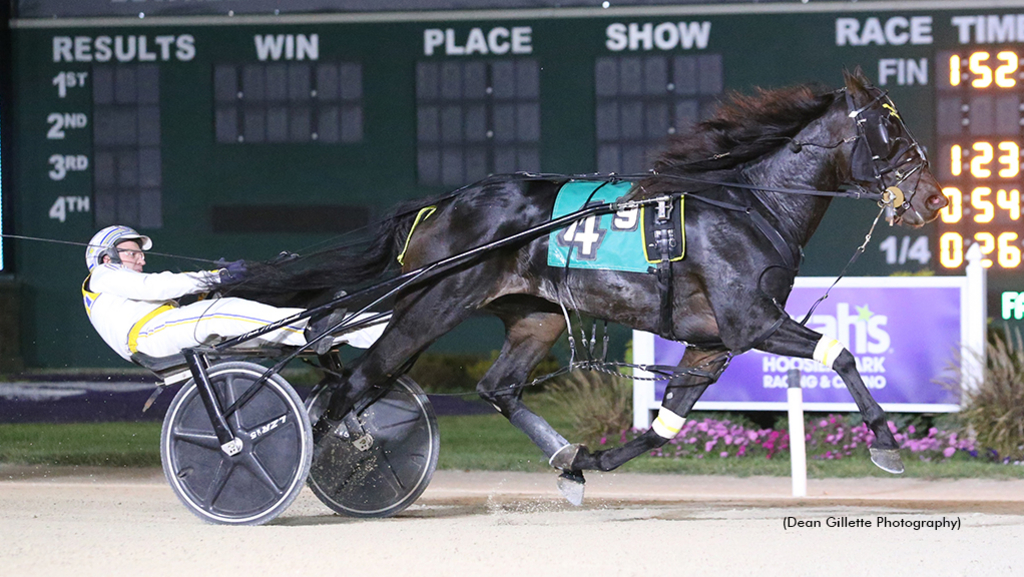 After sweeping the Breeders Crown elimination and final, trotting colt King Of The North continued his late season streak winning the $200,000 Carl Erskine, one of four Grand Circuit stakes for three-year-olds featured on Friday night (Nov. 4) at Hoosier Park.

Mark MacDonald worked out the winning trip behind the 1-2 favourite for trainer Ray Schnittker.

After landing in the pocket through a :26.2 opener, King Of The North (pictured above) looped 114-1 longshot leaver Delgado (Sam Widger) and cruised through middle splits of :54.3 and 1:23.1 en route to the three-length victory in 1:52.2. Delgado held his own in the stretch to finish second while  Dover In Motion (Ricky Macomber Jr.) got the nod in a show photo between the late-closers.

"A Hambo would have obviously been great, but it's hard to keep them good all year," said MacDonald in a post-race interview. "I think either you get the early money or the late money and, as of now, he's been getting the late stuff, so I'm pretty happy about that.

The millionaire son of Walner and Check Me Out now sports a seasonal summary reading 3-2-3 from 14 starts with $677,115 banked this year for owners Schnittker Ward, Arden Homestead Stable, Nolamaura Racing and Steven Arnold.

According to his connections, King Of The North is being pointed to the Matron Stakes next week at Dover Downs and has been invited to the TVG Championships later this month at The Meadowlands.

In the co-featured $200,000 Monument Circle for pacing colts and geldings, Bythemissal fought off rivals on both sides down the stretch to prevail as the 1-5 favourite.

Leaving from the outside post nine, driver Chris Page got the popular Ron Burke trainee away mid-pack and moved first-over after a :26.4 opening quarter. Bythemissal cleared early leader Birthday (David Miller) after a :54.2 half and led the way past three-quarters in 1:21.3 with a two-length lead into the stretch before fighting off Birthday at the inside and the closing Ponda Warrior (Mark MacDonald) outside late for the 1:49.3 victory. Birthday finished a half-length behind in second with Ponda Warrior third.

"I just wanted to get away kind of close and I thought fractions were permitting to move him down the backstretch and put him on the lead," said Page after the race. "One thing the horse has never been is passed his whole life so I thought the front end was the spot to be.

"Nice fractions on a windy night and the horse dug in late. I had horses coming from both directions and he just knows how to win." 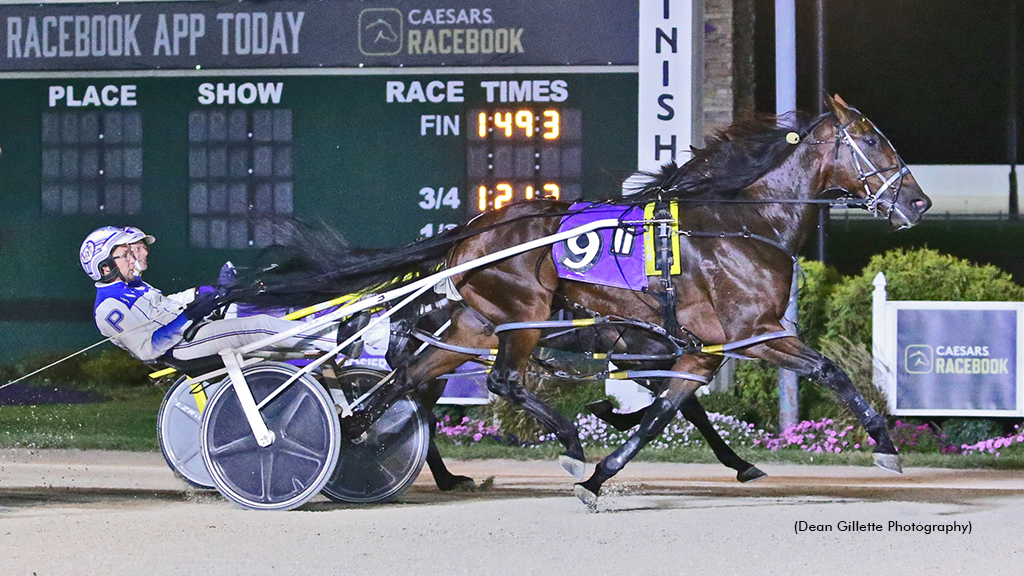 A gelded son of Downbytheseaside out of Dismissal, the sophomore pacer is in the midst of a million-dollar campaign after making just one start as a two-year-old. He is 13-for-16 with major victories in the Adios, Milstein, Little Brown Jug and Ohio Sire Stakes Championship.

"Ronnie Burke has obviously done a great job," noted Page. "The first start I drove the horse I was breaking his non-winners of two earlier this year, so to win the Jug, the Adios and now come to win the Monument Circle, I'm not going to take any credit, that's all Ron Burke."

Page and Burke also teamed up for a stakes victory with millionaire pacing filly Sea Silk, who delivered as the 3-5 favourite in the $100,000 USS Indianapolis.

Sea Silk left from the inside post while outsider Patsville (John De Long) pressed on through a :26.4 opening quarter to make front. The favourite followed in the pocket through middle splits of :55 and 1:23 before launching her attack down the stretch and pacing away late to win by 2-3/4 lengths in 1:50.3. Patsville held on for second over the winner's stablemate, Galleria Hanover (Yannick Gingras), who progressed from midfield down the backstretch to show. 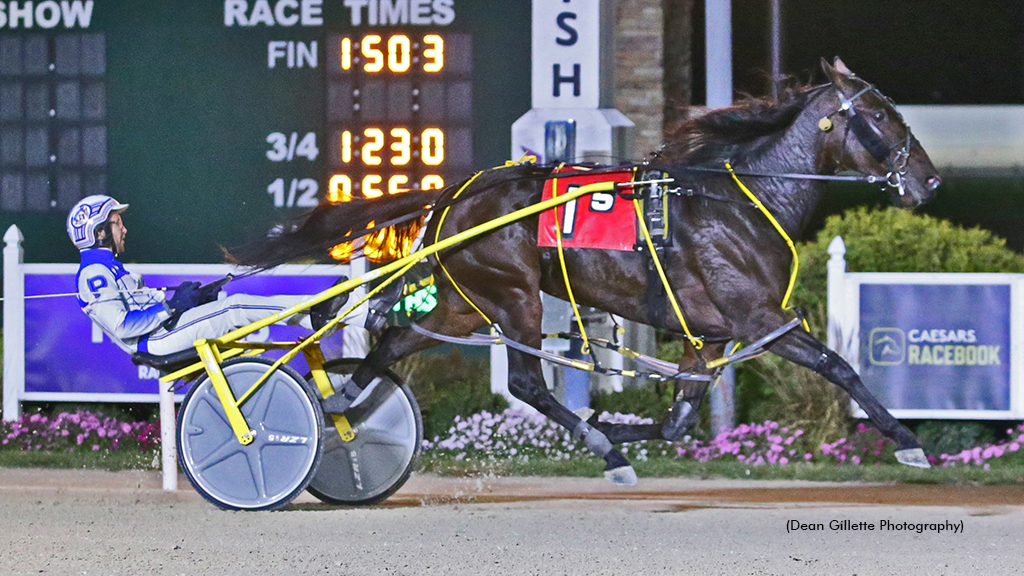 The daughter of Downbytheseaside-Silk Purse picked up her eighth win of the season from 14 starts and lifted her annual income to $481,008 for owner Burke Racing Stable, Weaver Bruscemi LLC,  Knox Services Inc., and Hatfield Stables.

Jusmakinyalook (Jordan Ross) had all eyes on her as she forged to the lead from post eight at 95-1 through a :27.4 opener, but favourite M Ms Dream swept up from fourth to take over past the half-mile mark in :56.2. After hitting three-quarters in 1:25, she turned for home with the uncovered Cash Infusion (Atlee Bender) bearing down and Jusmakinyalook still a threat to the inside. However, M Ms Dream dug in down the lane to hold off her rivals for the 1:53.3 victory. Cash Infusion finished a quarter-length behind in second while Gabbys C Note (Chris Page) closed on the far outside late to nab third-place honours over trailing tier starter Funky Wiggle (Kyle Wilfong). 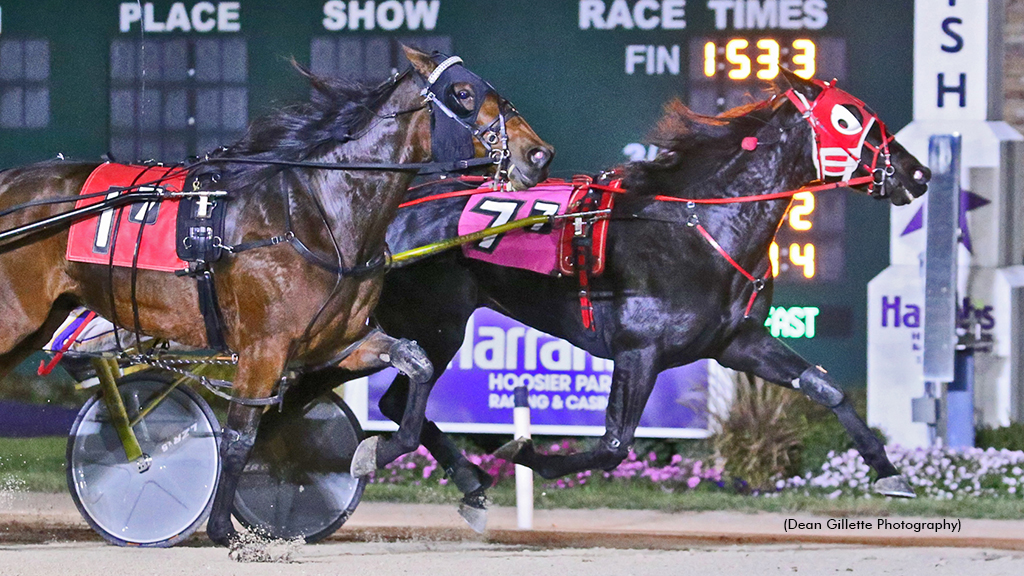 M Ms Dream, who was flawless throughout the Indiana Sires Stakes season, returned $3.40 to win as the 3-5 favourite.

The Swan For All-Trading Places filly now boasts a dozen wins from 13 sophomore starts and is just shy of the $500,000 earnings mark this year. She is owned by Eleven Star Stables, Frank Baldachino and Hillside Stables.

Bythemissal's next start will likely be in The Matron, at Dover Downs, on Thursday. That may be his final start of the year because he's not staked to The Progress Pace, the final stakes race of the year for 3yopcs, also at Dover, on Nov.23, and I don't know if supplemental entries are permitted for that race. Pebble Beach and Beach Glass are both staked to both The Matron and The Progress Pace.