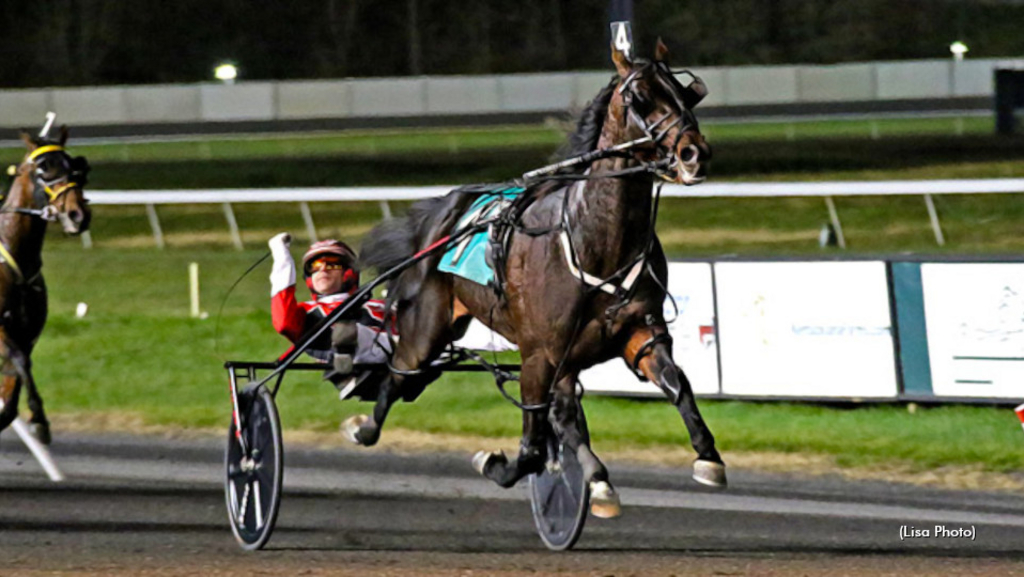 Appearing for the final time in his history-making career, “The Bulldog” was best in show once more.

Bulldog Hanover, who electrified the sport this season with his speed and personality, romped to victory in Saturday’s (Nov. 26) $345,000 TVG Series Open Pace championship by 2-1/4 lengths over Tattoo Artist in a stakes record 1:47.3 at the Meadowlands. Abuckabett Hanover finished third.

The winning time lowered the previous stakes record of 1:48, first set by Sweet Lou in 2014 and equalled by McWicked in 2018, by two-fifths of a second.

It took Bulldog Hanover three-eighths of a mile to get the lead from This Is The Plan, who brought the field to the opening quarter in :26.1. But once he was on top, there was no looking back. Bulldog Hanover and driver Dexter Dunn hit the half in :54.2 and three-quarters in 1:21.3 on their way to the career-ending win.

“Week after week, he puts those kinds of runs in,” said Dunn, who gave several fist pumps crossing the finish line. “He doesn’t do it easy. He was working in that first turn; he was [outside] in hot speed and I just carried on with him. He’s got all the power. It was an amazing performance tonight and a great way to go out for him.”

The win was Bulldog Hanover’s 14th in 16 races this year and pushed his seasonal earnings to $1.86 million for Canadian-based trainer Jack Darling, who owns the four-year-old stallion with Brad Grant. For his career, the Hanover Shoe Farms-bred son of Shadow Play-BJs Squall won 28 of 37 starts and earned $2.79 million.

In July, also at the Meadowlands, Bulldog Hanover became the fastest horse in harness racing history when he won the William R. Haughton Memorial in 1:45.4.

He retires with four of the nine fastest race miles in history and a record total of six wins in under 1:47. Among those were two Canadian record-equalling 1:46.4 victories at Woodbine Mohawk Park, most recently in the Breeders Crown last month.

“I’ll remember this season with him for the rest of my life,” said Dunn. “It’s hard to come by horses like this and it’s an amazing ride once you do it. Thanks to Brad and Jack and [caretaker] Johnny [Mallia] for letting me sit behind him. It’s been great.” 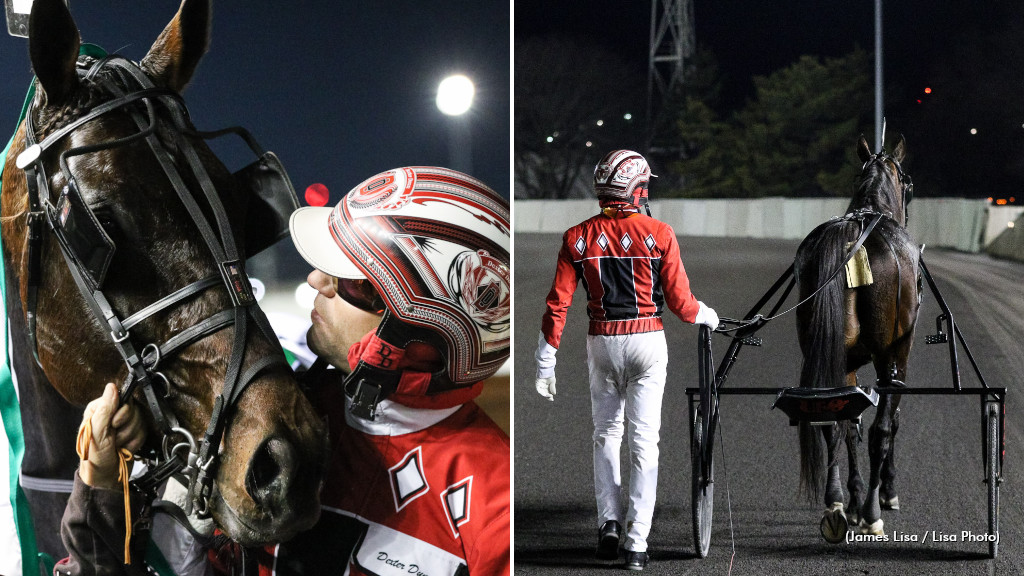 Following the victory celebration, Bulldog Hanover was given a retirement ceremony in The Meadowlands' winner’s circle.

“He’s just been tremendous as a racehorse,” Darling said during the ceremony. “He has a way of pulling at your heartstrings. Warming up tonight, going on the track, it was very emotional. He’s just that kind of a horse. He’s so classy, he has the personality; he’s just a special horse.”

Darling put Bulldog Hanover in the care of trainer Noel Daley when the horse raced at The Meadowlands during the summer, so Darling watched Bulldog Hanover’s record 1:45.4 mile from home. When asked to reflect upon that performance, Darling said, “I was just happy he won the race. I wasn’t even thinking about the time, and when they flashed the time up, my wife and I jumped 10 feet in the air.”

Bulldog Hanover closed his career by winning 18 of his last 20 races. In addition to the Haughton and Breeders Crown, his triumphs this year included the Canadian Pacing Derby, Dan Patch Stakes, Dayton Derby, Harrah’s Hoosier Park Pacing Derby, Graduate Series final, and a division of the Roll With Joe.

He will head to full-time stallion duty at Seelster Farms in 2023. He bred 79 mares this year prior to racing.

“He’s going to a good life, and he’s right close by so we can see him anytime we want,” Darling said.

Grant said the journey with Bulldog Hanover was “an amazing ride.” Grant also was among the owners of trotting mare Atlanta, who also had a retirement ceremony Saturday night at the Meadowlands following her performance in the TVG Series Mares Trot.

“They both seem to have huge fan bases,” Grant said about the two outgoing stars. “They’re going to be missed on the track, but they’ll be in the breeding barn, so in the years to come, they’ll be remembered.”

Bella Bellini captured the $140,000 TVG Series Mares Trot championship with a stakes record-equalling 1:51.4 performance, besting Refined by 2-1/4 lengths on a night the sport also bid farewell to the multiple award-winning and record-setting Atlanta at the Meadowlands.

Bella Bellini was fourth during the first half of the TVG final, with Refined leading the field to the opening quarter in :27 before surrendering the top spot to When Dovescry, who reached the half in :56.2. At that point, Dunn put Bella Bellini in gear with a first-over march that had his mare alongside When Dovescry as they hit three-quarters in 1:25.2.

Turning for home, Bella Bellini powered through the stretch with a :26.1 final panel. Refined edged When Dovescry in a photo for second; Atlanta finished fourth.

“She’s such an amazing mare,” said Dunn. “She felt great. Moving into the last turn, she was full of trot. I was kind of taking a hold of her and saying, ‘Wait a bit, girl, wait a bit.’ But she just felt amazing tonight.

“She loves chasing a horse down. The races sort of set up that way for her, and I can get away with it with the turn of foot she’s got when you ask her [to go]. It’s never easy. You’re racing against top-class mares. But she was so good tonight.”

Bella Bellini, a four-year-old daughter of Bar Hopping-Bella Dolce, is owned by breeder David McDuffee and trained by Richard “Nifty” Norman. She has won nine of 19 races this season and earned $1,003,193. For her career, she has won 20 of 45 starts and banked $2.14 million. She has hit the board in 36 of her last 38 races.

“She loves the racing; she really thrives off it,” said Dunn. “Last year and this year, the best she’s probably been has been at the end of the year.”

Added McDuffee, “She’s a special horse, that’s for sure. Nifty has done an incredible job with her and Dexter has been flawless. It’s pretty neat.”

Following the celebration for Bella Bellini, it was time to celebrate the career of seven-year-old Atlanta. The mare returned to the winner’s circle with driver Yannick Gingras and was met by owners Michelle Crawford of Crawford Farms Racing, Howard Taylor and Brad Grant. She was presented with a special blanket for her retirement. 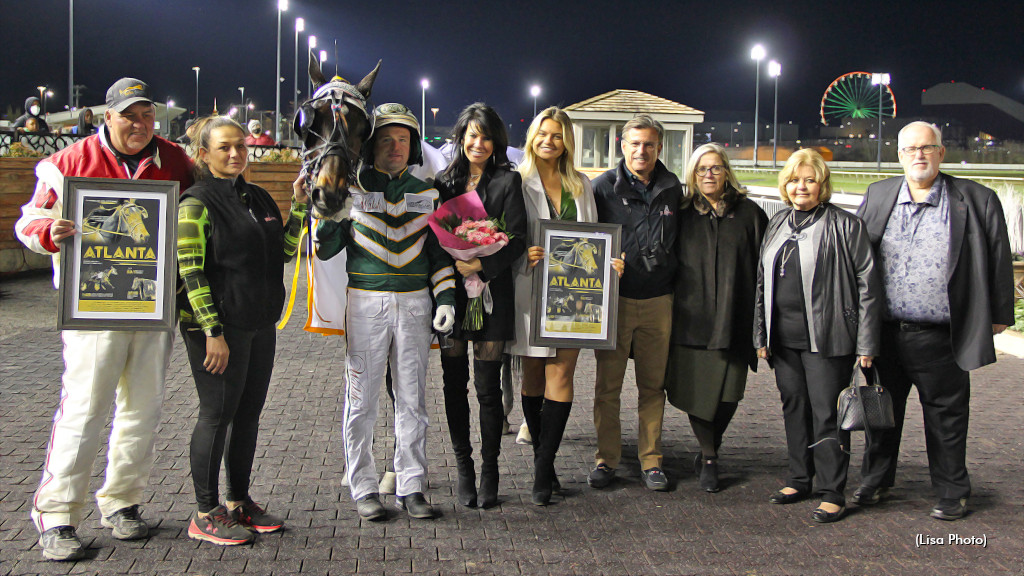 In 2018, she became the first filly in 22 years to beat the boys in the Hambletonian and was named the Dan Patch Award Trotter of the Year. She added a Dan Patch Award and an O’Brien Award in 2019 as the top trotting mare in the U.S. and Canada.

Other top victories included the Maple Leaf Trot, Allerage Open Trot, Dayton Derby and Cutler Memorial, plus the Graduate Series final and Charlie Hill Memorial – all over male rivals. She also won two editions of the Armbro Flight (2019 and 2022) and the Allerage Mare Trot (2021 and 2022).

“She’s just a great race mare,” said Gingras. “She ranks right up there with the best of them. She’s had a tremendous career. It [stinks] to retire them, but it’s time for the next chapter.

“You could always count on her to be part of the mix every time there was a big race. It’s going to be a big void to fill.”

Atlanta will become a full-time broodmare for Crawford Farms. She already has one foal, a filly by Muscle Hill born in April through embryo transfer.

“There is nothing that is more important than the race career she’s had, other than maybe the legacy she will leave being a broodmare,” said Michelle Crawford. “I think that she’s totally earned all of that.

“I think seeing her carry her own [foal] next year will be the most amazing thing ever.”

Crawford said there would be a contest to name Atlanta’s next foal.

“We want all of her fans to participate in that,” said Crawford.

Rebounding from a sixth-place finish the week prior, Ecurie D DK landed on the front, kept his competition at bay and rolled to a 1:50.2 victory in the $330,000 TVG Open Trot.

Driver Dexter Dunn floated Ecurie D DK off the wings and accelerated off the pegs for the top heading to a :27 first quarter. The six-year-old stallion by Infinitif cleared the lead from Its Academic on the backstretch and faced no threats to a :56 half before speeding around the final turn to click three-quarters in 1:23.3. Dunn worked to keep Ecurie D DK to task in the lane as he bounded for the finish with Its Academic looming nearer off the pocket trip in the closing stages, though Ecurie D DK held firm to win by three-quarters of a length. Jujubee gave chase to finish third and Back Of The Neck took fourth.

“He’s amazing. What a day. Being here at The Meadowlands and to win again ... it’s amazing,” said Marko Kreivi, co-owner of Ecurie D DK who bought the stallion as a three-year-old from Jean-Pierre Dubois. “I don’t know why he didn’t [race] more, but he’s had an amazing season. I felt good [about tonight]. He was good in Canada ... when he’s good, he’s really good.”

Grace Hill proved that her Breeders Crown win was no fluke when driver Todd McCarthy guided her to a virtual wire-to-wire victory in a career-best 1:48.3 clocking to capture the $158,000 TVG Mares Pace.

Grace Hill and McCarthy left the gate swiftly at the outset and they raced parked through most of the :26.2 opening quarter by Treacherous Dragon and Scott Zeron before clearing to the front. No Win No Feed A, Gias Surreal and Niki Hill all left for position from the outside, with favoured Test Of Faith and David Miller allowing Niki Hill to settle in front of her before the quarter pole. McCarthy kept a brisk clip with Grace Hill going to the half-mile pole and reached that station in :54.3 before Dunn and Niki Hill pulled to the outside without cover, providing a solid tow for defending U.S. Horse of the Year Test Of Faith.

On the final turn, Grace Hill accelerated and made the outside pair of Niki Hill and Test Of Faith work hard, reaching three-quarters in 1:21.4. Grace Hill gained separation from the pocket-sitting Treacherous Dragon and was in complete command for much of the stretch as the anticipated showdown with Test Of Faith didn’t quite develop as it had in the Breeders Crown. Grace Hill completed the mile with a :26.4 final quarter, winning by 1-1/2 lengths, while Niki Hill — a three-year-old racing against older mares for the first time — gamely held off Test Of Faith in the battle for the second-place spot. Gias Surreal rallied for fourth with Treacherous Dragon fifth.

Tom Hill swept the top two places in the event as owner of both Grace Hill and Niki Hill. A four-year-old by Always B Miki, Grace Hill was a winner for the 19th time during her career. Virgil Morgan Jr. conditions the millionaire mare, who was bred in New Jersey at White Birch Farms.

“She dug right in, she didn’t want to let them pass her,” said McCarthy of Grace Hill’s performance.

What can you say about this horse which hasn't already been said? Congratulations to Bulldog, the presumptive 2022 HOTY. And that concludes the Grand Circuit stakes racing season for 2022. The next major Grand Circuit race will be The Borgata Final, at Yonkers, in April.