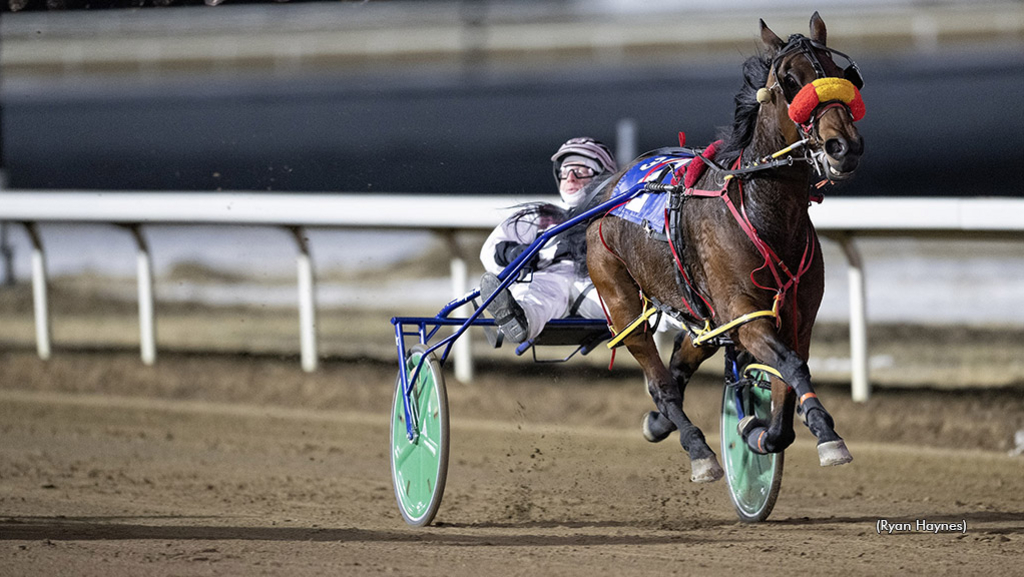 Doug McNair dominated the 2022 National Driving Championship (NDC), presented by Standardbred Canada, leading the competition from start to finish and winning four of the eight tournament races at Century Mile Racetrack and Casino in Edmonton, Alta. on Thursday evening (Nov. 24).

Competing at Century Mile for the first time in his career and facing seven other top drivers from across Canada, McNair took the lead right out of the gate as he won the first two legs with Jayden Riley ($3.20) and his first choice draft pick Oriental Express ($2.10).

A second and two third-place finishes kept the 32-year-old Guelph, Ont. reinsman atop the leaderboard while Western Canada representative Dave Kelly picked up a pair of victories and Quebec's Pascal Berube made a winner's circle appearance in the subsequent races.

With the competition closing in, McNair countered with back-to-back victories courtesy of Litizor ($12.90) and Captain Mike Deo ($21) to clinch the title with an insurmountable lead in the point standings with one race still to go.

Atlantic Canada rep Marc Campbell closed out the NDC with a victory while McNair picked up another top three finish in the finale.

McNair ended the eight-race competition with 91 points to earn his second NDC title while Kelly (69 points) finished second and Berube (46 points) was third. 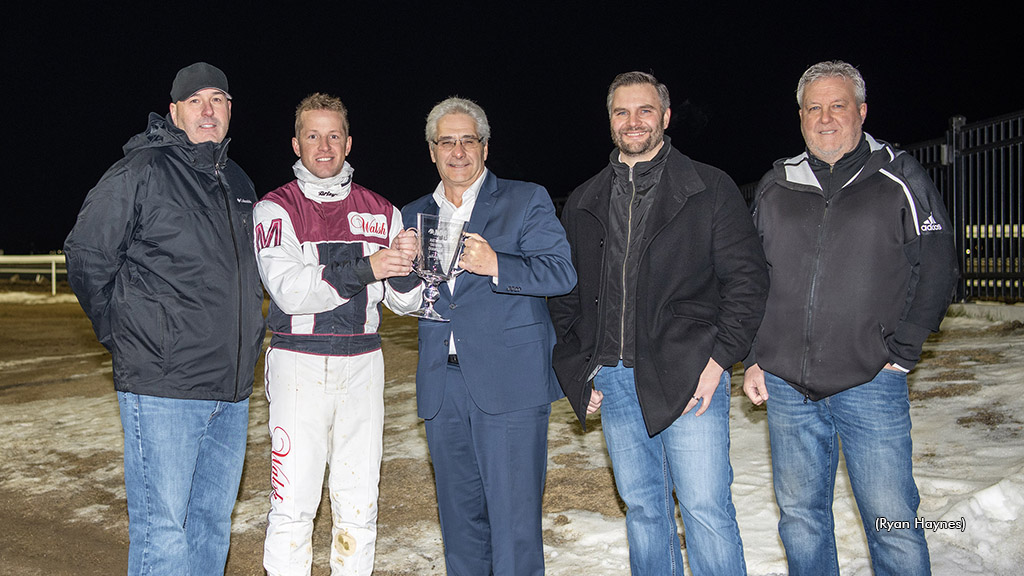 As winner of the NDC, McNair will go on to represent Canada at the 2023 World Driving Championship, which will be held in The Netherlands, Belgium and Germany from Aug. 14 to Aug. 18.

"I just want to say thanks to all the trainers that let me drive their horses, and caretakers and owners, and Standardbred Canada for making this possible," said McNair from the winner's circle. "It's just starting to sink in now. It's going to be pretty exciting and hopefully I'll have a lot of fun."

McNair, who previously won the NDC in 2018, has driven winners of 4,202 races and more than $74 million in purses lifetime. An O'Brien Award-winning driver, he is among the top reinsmen at his home track at Woodbine Mohawk Park with his mounts earning 286 victories and more than $6.7 million in total this year. 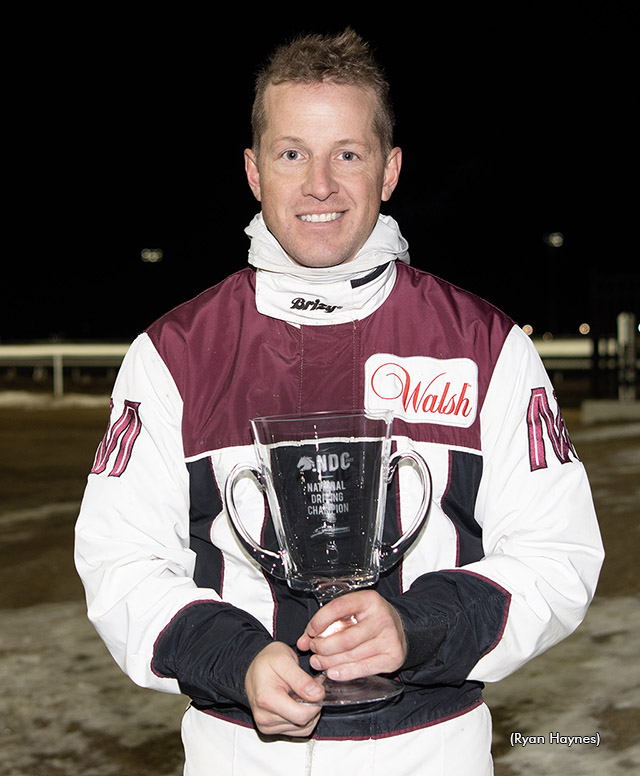 Here is a look at the final 2022 NDC leaderboard:

A replay of the live stream from Century Mile and recaps of the NDC legs (Races 3-10) are available below.

Ontario representative Doug McNair opened the National Driving Championship with 3-5 favourite Jayden Riley ($3.20) winning in a season's best 1:56.3. McNair sent the Gerry Hudon-trained mare to the lead from post two and carved out opening fractions of :29 and :58.4 with Hooz Stolen Mona (Louis-Philippe Roy) moving first-up from fourth before Gold Onthehorizon (Mike Hennessy) rallied three-wide from the backfield to engage the leader in a duel past three-quarters in 1:26.4. Those two continued to battle on top in the stretch with Jayden Riley fighting back to win by three-quarters of a length. Metaki (Gilles Barrieau) and Donoharm (Dave Kelly) closed late on the outside with the former edging out the latter in a photo for place, finishing just ahead of Gold Onthehorizon.

Fresh off his victory in the NDC opener, a confident Doug McNair headed right back to the winner's circle after scoring with his first choice draft pick and 1-9 favourite Oriental Express ($2.10) in 1:57.4 for trainer Brinsley Brooking Lutz. McNair swept from third to first with the popular mare after a :28.3 opening quarter and never looked back. Oriental Express set middle splits of :58 and 1:29.1 then cruised home a 2-1/2-length winner, picking up her second straight victory at Century Mile. Stylomilohos (Pascal Berube) chased from the pocket in second while Rural Art (Gilles Barrieau) finished third over Jedi Tricks (Louis-Philippe Roy) and Diggin A Trench (Marc Campbell) in a tight finish for the minor awards.

Hometown rep Dave Kelly struck in the third leg driving 2-1 second choice Blue Powder ($6.50) to a career-best victory in 1:54.4 for trainer J.F. Gagne. Kelly sent the winning pacer three-wide off cover turning for home and wore down pacesetter Subzero (:27.1, :54.4, 1:25.2), who finished a length behind for early NDC point leader Doug McNair. Kelly's own trainee in the race, Tropical Dragon (Marc Campbell), got up for third. With the victory, Kelly improved to second-place in the standings with a total of 24 points behind McNair, who has accumulated 40 points.

Pascal Berube's first draft pick Light My Shadow ($4.20) delivered a winning performance for the Quebec reinsman in the fourth leg as the Nathan Sobey-trained sophomore colt drew clear down the long Century Mile stretch to score in a new lifetime mark of 1:55.2. Berube watched from third as Ceia When I Ceia (Doug McNair) was looped on the lead by Promising Flight (Louis-Philippe Roy) after a :28.1 opening quarter then made his move with even-money choice Light My Shadow when the outer flow started up on the way to the half in :57.1. Light My Shadow confronted the leader as they raced by three-quarters in 1:25.3 and took over control with Bohannon (Dave Kelly) rallying off his cover to place despite that one drifting out in the lane. Ceia When I Ceia finished third over Promising Light.

After the first half of the NDC, McNair leads with 47 points while Kelly sits second with 34 with Berube trailing in third by just four points.

Dave Kelly doubled up in the competition with three-year-old filly Suellen Hanover ($7.20) winning by three lengths in a 1:57.3 career-best performance for trainer Phil Giesbrecht. Suellen Hanover, who was Kelly's first draft pick, advanced from an early three-hole to take command from even-money favourite Outlawskysthelimit (Louis-Philippe Roy) by the midway mark in 1:00 and began to build her lead through three-quarters in 1:29.2 en route to the victory. Outlawskysthelimit stayed for second with Dialmeup (Doug McNair) from Kelly's stable finishing third. With the competition heating up, Kelly narrowed McNair's lead in the standings and is just five points behind (49-54) while Berube remains third (35 points).

Doug McNair padded his lead in the NDC standings with his third win of the night courtesy of 5-1 shot Litizor ($12.90) from the Jamie Gray stable. After Ptsmagicmark (Gilles Barrieau) retook the lead from 7-5 favourite Prairie Pursuit (Marc Campbell) through opening fractions of :27.4 and :58, McNair went on the attack with four-year-old pacer Litizor. They progressed first-up from fourth to three-quarters in 1:27.1 and pulled ahead of Ptsmagicmark down the stretch to win in 1:55.3 with Tajmania (Louis-Philippe Roy) closing off cover to finish a length behind in second. Ptsmagicmark settled for third. The top three positions on the leaderboard remained unchanged with McNair (69 points) extending his lead followed by Dave Kelly (52) and Pascal Berube (39 points).

Doug McNair emerged between horses in deep stretch with Captain Mike Deo ($21) to spring a 9-1 upset and nail the even-money favourite at the wire in 1:57.4 to secure his fourth NDC victory and an insurmountable lead in the point standings. There was a four-horse cavalry charge into the first turn, with McNair in the mix and getting away third with Captain Mike Deo as bettors' choice Grampian Road then Crazy I M (Gilles Barrieau) forged ahead through a :28.2 opening quarter. Retaking the lead, Grampian Road fronted the field through fractions of :57.3 and 1:27.4 with Hey Stanley (Dave Kelly) first-up and Chase My Dust (Marc Campbell) charging three-wide as the field turned for home. However, McNair split rivals down the stretch to steal the glory with the Brent Bodor-trained sophomore pacer catching Grampian Road in the final strides. Hey Stanley inherited third after an inquiry into the first turn action resulted in Crazy I M being disqualified from third and placed eighth for causing interference during the action in the first turn. McNair boosted his point total to 84 while Kelly follows with 59.

Atlantic Canada representative Marc Campbell closed out the NDC with a victory in rein to 2-1 second choice Blue Who ($6.40), his first draft pick. Campbell sent the Greg Manning-trained pacer first-over from third after the leading Custards Dungeon (Dave Kelly) and pulled two lengths clear at the end to win in a career-best 1:54.3. Custards Dungeon settled for second while even-money favourite Kootenay Lager rallied wide to close for third for NDC champion Doug McNair, who ended the competition with 91 points.

In the event of a scratch, the driving rep drawn to a horse shall drive the ‘also eligible’ horse.

In the event of a horse being scratched or where no horse is available, five (5) points shall be awarded to the driver concerned. If a horse is disqualified or a horse and driver fail to complete the race, they will receive one (1) point.