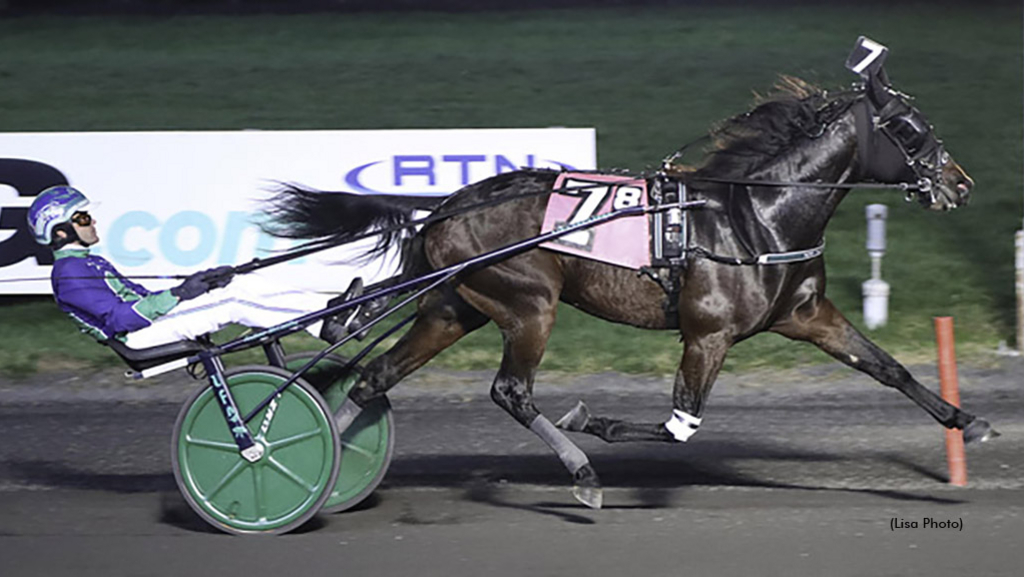 After watching Volume Eight win the Kindergarten Classic Series championship by 8-1/4 lengths in 1:52 in his most recent race on Nov. 12, trainer Noel Daley is hoping to see a similar performance in Saturday’s $416,200 Valley Victory Stakes for two-year-old male trotters at The Meadowlands.

Volume Eight, who received a bye to the Valley Victory final, brings a four-race win streak to Saturday’s contest. He will start from post nine with regular driver Andy McCarthy.

For the year, the son of Chapter Seven-Lass A Rope has won six of eight starts and earned $234,537. His mark of 1:52 is the fastest of the season for a two-year-old male trotter by three-fifths of a second.

“To me, it’s his to win or lose,” Daley said about the Valley Victory. “Things can happen, they’re horses, but if he’s anywhere near as good as he was last time, they won’t beat him. He’s got to come back and do it again, but if he’s the same as he was, that’s my opinion anyhow.

“It wasn’t just the 1:52, it’s the way he did it. He got home in 27 seconds and Andy said the horse could have come home in 26 seconds if he let him go at all. Andy had him under a tight hold the entire way. He couldn’t believe how much he had left. To me, he’s a very talented horse. I wouldn’t swap him with anyone at this stage.”

A paddock injury in early spring kept Volume Eight from making his debut until Sept. 1, when he finished fifth in a preliminary round of the Kindergarten. He followed with wins in a conditioned race and the Standardbred Stakes before a sixth-place finish in a division of the Bluegrass Stakes.

From there, it’s been nothing but victories, all on the Grand Circuit. Not even an early break in the final preliminary round of the Kindergarten could keep Volume Eight from the winner’s circle as he rallied for a head triumph.

“He’s great gaited,” said Daley. “When he did something wrong there, it’s not because he’s bad gaited, he was just a bit angry wanting to go. Andy was trying to take him off the gate and I could see he was getting a little mad about it and he just lost him. At least he was good enough to get back going again.”

Among the horses joining Volume Eight in the Valley Victory are Celebrity Bambino, who won last week’s elimination, and Peter Haughton Memorial winner Kilmister, who like Volume Eight received a bye to the final.

Eliminations were not necessary for the Goldsmith Maid. Bond brings a five-race win streak to the event, including the Kindergarten championship for the fillies in her most recent outing. The field also includes Matron Stakes winner Brunella, Garden State winner Blonde Bombshell and Kentuckiana Stallion Management Stakes winner Heart On Fire.

Saturday’s stakes action also includes the TVG Series championships for pacers and trotters. Bulldog Hanover, the No. 1-ranked horse in the sport for 20 consecutive weeks, will make his final career appearance in the Open Pace while multiple Dan Patch and O'Brien Award winner Atlanta will make her final career start in the Mare Trot.