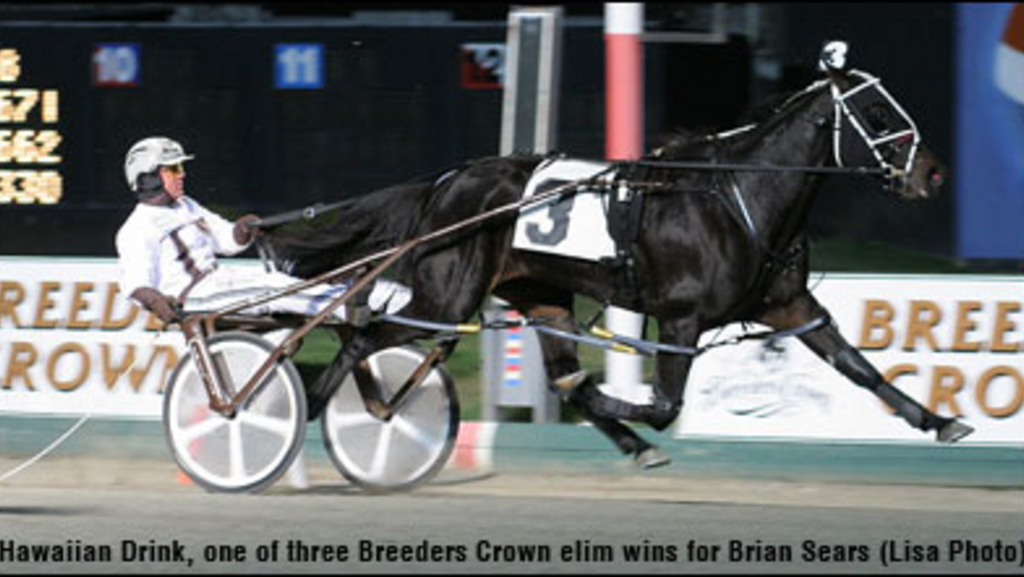 Brian Sears scored a driving hat-trick in the much anticipated Breeders Crown eliminations for freshmen pacers and trotters that kicked off Friday night at the Meadowlands Racetrack.

Allstar Hanover romped to a 1:59 clocking in the first $25,000 Breeders Crown elimination for two-year-old trotting fillies on Friday night at The Meadowlands. Guided confidently by David Miller for trainer Joe Holloway, the daughter of Cantab Hall--Astraea Hanover--Valley Victory notched her seventh win of the year in 12 tries for owners Bluestone Farm and Fredericka Caldwell of New Jersey and Kentucky.

"The track is good tonight but is still a little loose," said Miller. "It's pretty windy down the backstretch too. I got to the lead in the fashion that I wanted and couldn't have gotten a better trip. This filly has been good all year long and is fun and very handy to drive. With a similar trip I expect her to be right there in the final."

Michelles Way finished second for George Brennan, while Celebrity Athena nailed third for driver Peter Wallinder. Highscore Kemp just got up for fourth with driver Tim Tetrick at the lines.

Yursa Hanover (Daniel Dube) held on in a photo finish to score a 1:56.2 career best in the second of three $25,000 Breeders Crown eliminations for two-year-old filly trotters. The daughter of Windsongs Legacy--Yankee Topaz--Lindy Lane nosed out the hard trying Timelesswinner Two (Yannick Gingras) for the win.

"I followed Cat (Manzi) and when she ended up first over she just kept on going," said winning driver Daniel Dube. "I chased her a little bit down the stretch just to make sure that we were going to be able to pick our post position and she really hung on gamely. She did nothing wrong at all, was great to drive, and was very strong."

"She's a very handy mare, I told Danny just to get her in position and give her a good shot," said Benoit Baillargeon. "She was kind of a late bloomer and had some curb issues early on, but has really come around in her last three races."

Yursa Hanover is owned by Richard Berthiaume of Quebec, and picked up her second career victory with her Breeders Crown elim. Southwind Wasabi was third for Cat Manzi, while I Wanted Wing got up for fourth with John Campbell at the lines.

Musical Mystery scored a snappy upset in 1:56.3 for the team of driver Mike Lachance and trainer Ron Gurfein in the third of three $25,000 Breeders Crown eliminations for two-year-old trotting fillies. Owned by Brittany Farms of Kentucky, the daughter of Cantab Hall--Musical Victory--Valley Victory picked up her sixth win in 11 career starts and just got up to best rival Honorable Daughter (John Campbell) at the wire. Celebrity Juliet (Brian Sears) was third, while Gift Card (Tim Tetrick) was fourth.

"This is very nice filly and she's been good all year long," Lachance said. "The trip couldn't have worked out any more perfect for her. She's by Cantab Hall and it seems that he's throwing better fillies than he does colts right now."

Captain Sir, a 38-1 longshot, scored a rousing upset in the first of two $25,000 Breeders Crown elimination for two-year-old colt pacers.

Driven by Jody Jamieson for his father, trainer Carl Jamieson, the son of Art Major--Yankee Luck--Western Hanover scored in 1:52.3 and picked up his third career win in six tries. Trainer Carl owns the pacer in partnership with Arthur Slack and Thomas Kyron of Ontario.

"He's been a real fast colt all along," said Jody Jamieson. "When he kicked for home, he kicked real hard. It's been a long year. These horses have been going a long time save for Art Colony, and he was second. It says something about the class of the two-year-old horses this year. These horses can last a long time and they've all got good money on their cards. We're just lucky tonight to have a fresh horse coming up."

Racing Star scored a major upset at 23-1 in the first of two $25,000 eliminations for freshman pacing fillies, stopping the timer in 1:54 with Yannick Gingras at the lines. The daughter of Four Starzzzz Shark--In For Life--Life Sign is trained by Jeff Stafford for the White Birch Farm of new Jersey and picked up her third career win in 12 starts.

"She's been knocking on the door the last couple of weeks at Dover and has been caught in a bad spot lately. Tonight it worked out," said winning driver Yannick Gingras. "She's definitely better following other horses and is much better with a trip, but this division is wide open, and with a good trip, she's as good as anything in there."

Peter Haughton Final winner Muscle Hill made it look easy as the 1-6 favorite, winning the first of two $25,000 Breeders Crown eliminations for two-year-old trotting colts in 1:57.2.

The son of Muscles Yankee had eight-time Meadowlands driving champion Brian Sears in the sulky. He is trained by Greg Peck for owners Jerry Silva and the TLP Stables of New York and New Jersey.

"It's great to have patient owners," said trainer Greg Peck. "We've really tried to work out a good schedule for this colt. There's a couple of other good ones in the other division, so as they say, it truly does come down to the Breeders Crown."

Keystone Activator (Andy Miller) was second, while Cesar A Blue Chip (Tim Tetrick) was third. Braggart (David Miller) finished fourth but was disqualified for breaking and moved to seventh. That moved up Select Yankee (Daniel Dube) to fourth and Winning Mister (Mike Lachance) to fifth.

Hawaiian Drink scored an easy 1:55.3 victory in the second of two $25,000 eliminations in the Breeders Crown two-year-old filly pacing division.

The daughter of I Am A Fool--Be Passionate--Grinfromeartoear was steered by Brian Sears, giving him back-to-back winners in Crown elims. Hawaiian Drink is trained by Tracy Brainard for the Bulletproof Enterprises of Florida.

"She's better off the pace, but she was awful sharp tonight," said Sears.

Major In Art, a son of Art Major--Miami Spice--Jate Lobell, paced to his sixth career win by taking the second of two $25,000 Breeders Crown elimination for two-year-old pacing colts on a chilly Friday night at The Meadolwands in wire-to-wire fashion, stopping the timer in 1:53.4. The win was the third in a row for driver Brian Sears, who steered the pacer for trainer Justin Lebo and owners Major In Art Stable of Pennsylvania.

The game youngster, who had also captured the Woodrow Wilson and Metro Stakes earlier this season, held off a wall of horses including Clear Vision (Ron Pierce) who was second, Artists Rally (Jody Jamieson) third, If I Can Dream (George Brennan) fourth and Western Dakota (David Miller) fifth.

Explosive Matter, a son of Cantab Hall--Fireworks Hanover--Muscles Yankee, kept his record unblemished with a 1:56.4 jaunt in the second of two $25,000 Breeders Crown eliminations for two-year-old trotting colts and geldings.

Owned by Adam Victor & Son Stable of New York, Explosive Matter is conditioned by Noel Dailey and was driven by Ron Pierce. This was his fifth career victory in as many tries.

"From day one he had a special talent in Florida," said Adam Victor, Jr. "We think this is the horse to beat. We owe everything in this business to Noel (trainer Dailey). We hope for the best racing luck possible in the final."

Eliminations for three-year-olds are set for Saturday night.

(With files from The Hambletonian Society & NJSEA)

In reply to Last night again Mr. Sears by Anonymous (not verified)

I think Sears is one of the

I think Sears is one of the best drivers the sport has seen. However, Stanley Dancer once said, "You can't bring in a Mule."

Last night again Mr. Sears showed that he is by far the best driver in the world w/ the great drive on Major In Art, sticking George B in his pocket. When was the last time Sears drove a bad race in a major stake?? He owned the stakes in September @ Mohawk & he will own turkey weekend @ The Big M.