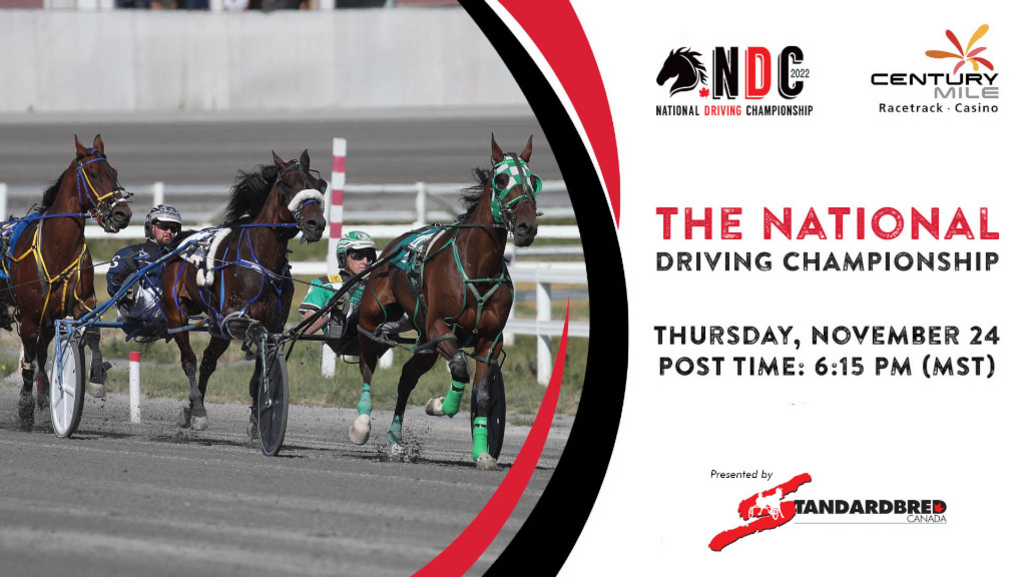 The fields are set for the 2022 National Driving Championship, presented by Standardbred Canada and hosted by Century Mile Racetrack and Casino in Edmonton, Alta., this Thursday, Nov. 24.

The winner of the NDC will represent Canada at the 2023 World Driving Championship, which will be held in The Netherlands, Germany and Belgium from Aug. 14 to Aug. 18.

"Standardbred Canada and the Board of Directors are excited to present the National Driving Championship in Edmonton, Alberta on Thursday," said Dan Gall, President & CEO of Standardbred Canada. "We would like to thank Horse Racing Alberta, the Alberta Standardbred Horse Association, the Century Mile team and all participating racetracks who hosted the Regional competitions this past year. This competition could not and would not happen without the hard work of the SC team including Darryl Kaplan, Hailey Saunders and the entire Communications Department. Best of luck to our Regional drivers this Thursday at Century Mile and we look forward to celebrating Canada's Driving Champion, who will go on to represent our country at the World Driving Championship in Berlin, Germany next August."

The NDC races are carded as Races 3 through 10 on Thursday's program. Post time for the evening's first race is 6:15 p.m. (MST).

“Century Mile Racetrack and Casino is excited to host this prestigious event," said Allen Goodsell, Racing Manager, Century Mile Racetrack and Casino. "Our teams and customers are ready for the thrill of witnessing eight of Canada’s best drivers competing at our track. This is an incredible opportunity to see who will represent Canada at the World Driving Championship. What an honour!”

The entries were finalized on Sunday, Nov. 20 when a draft took place with the NDC drivers selecting their horses for each race before post positions were drawn. Each driver had the opportunity to make a selection first through eighth during the draft. The post position draw was held following the draft ensuring that each driver starts from post one through eight in the tournament.

“Horse Racing Alberta is proud to welcome the National Driving Championship taking place at Century Mile, Canada’s newest racetrack," said Kent Verlik, CEO of Horse Racing Alberta. "We would like to thank Century Mile and the Alberta horsepeople for their participation in this prestigious event, and we are looking forward to an exciting evening of racing featuring the best drivers in Canada.”

Full coverage and live streaming of the NDC will be available on standardbredcanada.ca.