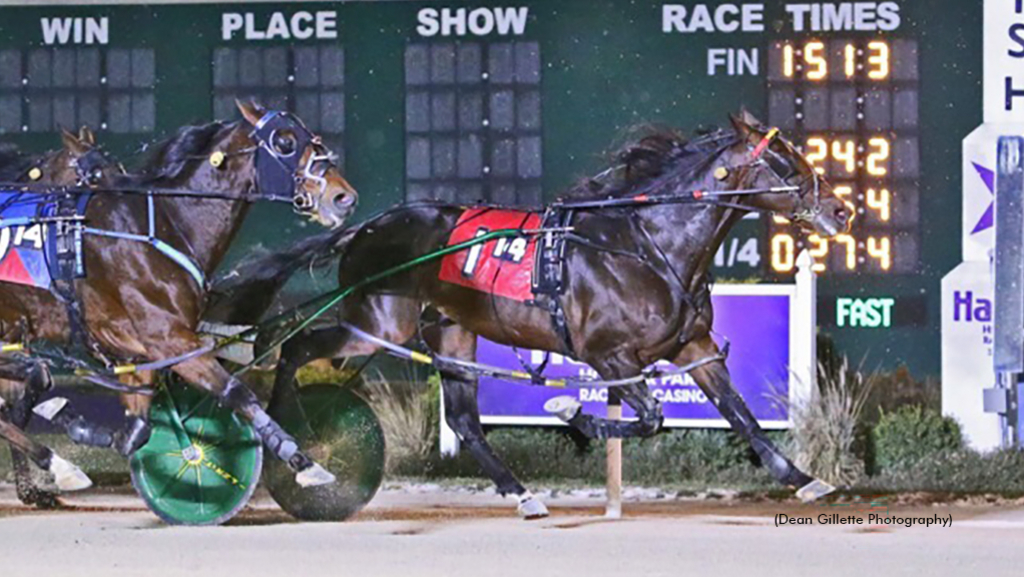 Looking to rebound from an uncharacteristic seventh-place effort in the Carl Erskine, Ponda Adventure returned with a vengeance to kick off the stakes action on the night with a 1:53.3 score in the $57,000 three-year-old colt trot.

Leaving from post six in the field of nine, leading driver Trace Tetrick wasted no time getting to the front, sending Ponda Adventure straight to the lead through an opening quarter of :27.1. The Erv Miller trainee had things his way though a :58 middle half, leading the charge to the homestretch with Ohio standout Caviar Gold and Chris Page hot on his heels in the pocket. Ponda Adventure dug in gamely in the lane, rebuffing the pocket-popping Caviar Gold with a :28.2 final quarter to score by three-quarters of a length over Caviar Gold. Swan Flyer and John De Long finished third.

The victory was the 13th of the season in 17 tries for Ponda Adventure, who has only finished worse than second once in 27 lifetime starts. Owned by Engel Stable of IL LLC, Louis Willinger and Jerry Graham, the gelded son of Swan For All has banked $385,569 on the season and more than $650,000 for his stellar career.

Different tactics were used by the winner in the $57,000 three-year-old filly pace, as a late rally from the backfield was the ticket to the winner’s circle for Galleria Hanover.

Driver Sam Widger opted to take back off the gate from post six with Galleria Hanover, landing in the seventh position early, as A Girl That Twirls and Trace Tetrick cut an opening quarter of :26.4 from the inside. A Girl That Twirls maintained front-end control through a half of :55 before leading the field to the far turn in 1:24.1 under duress from Patsville and John De Long as Galleria Hanover waited to pounce from third-over. Patsville forged to the lead briefly before being met to her outside by Galleria Hanover, who thundered home in :27.3 through the snow to score by three-quarters of a length in 1:53. Patsville held for second, with Best Place To Be and Brandon Bates rallying to round out the trifecta at 78-1.

The victory was the fifth of the season for the Ron Burke-trained daughter by Indiana’s fastest son, Always B Miki, out of the Somebeachsomewhere mare, Gallie Bythe Beach. Owned by W. J. Donavon, Purnel & Libby LLC and Joe Sbrocco, Galleria Hanover has deposited $192,662 into her seasonal bank account and now has more than a quarter of a million dollars in her career.

In the $58,000 three-year-old filly trot, Brickhouse Babe picked up her first victory of the season in a big way with a dominant 1:54.2 score.

Driver John De Long was able to settle Brickhouse Babe in fourth in the early going amidst confusion with breakers off the gate as Verlin Yoder fired Gracelyn Hanover to the front from post nine through an opening quarter of :27.3. Yoder kept the gas pedal down up the backstretch, putting six lengths on his nearest competitor though a hot opening half of :56. The field began to reel in the leader on the far turn, with Gabbys C Note and Chris Page vacating the pocket, forcing Brickhouse Babe three-wide as she went on the attack at three-quarters in 1:25.4. The wide trip around the final turn didn’t phase Brickhouse Babe, as she stormed home in :281 to put three lengths on the field on the line. Alana Hill and LeWayne Miller finished second, with Luv Lorelei and Robert Taylor third.

Brickhouse Babe's first win of the season came in her 18th start. Trained by Ryan Miller and owned by Ray Schnittker, Brickhouse Babe is a daughter of Walner out of the Donato Hanover mare, Royal Assets. The victory was her fifth lifetime and pushed her lifetime earnings over the $300,000 mark, with $96,297 banked in 2022.

Driver John De Long picked up a second victory in the Star Destroyer, this time teaming up with Indiana Sire Stakes champion Ponda Warrior (pictured above) in the $65,000 three-year-old colt pace.

Leaving from the insider in a congested field of 11, De Long put Ponda Warrior into play immediately, settling in the pocket behind Sure Thing Herman and Atlee Bender through an opening quarter of :27.4. De Long deuce-popped up the backstretch, briefly clearing to the lead before immediately being covered up one more by Taurasi and Devon Tharps though a half of :554. Yourwishisgranted and Kyle Wilfong went on the offensive on the far turn, putting his nose up front on the far turn through three-quarters in 1:24.2. Taurasi battled back in the stretch to fend off the challenge of Yourwishisgranted, but he faced one more rally up the inside as Ponda Warrior and De Long patiently waited for the passing lane before rallying with a :26.4 final quarter to score the 1:51.3 victory by half a length. Taurasi dug in gamely for the place position, with Sure Thing Herman finishing third.

Ponda Warrior posted the fifth win of his sophomore campaign in 17 tries for trainer Jay Hochstetler, who co-owns the Rockin Image colt along with Finkelberg Racing LLC and South Of The Track Racing Inc. Out of the American Ideal mare Sweetinsinful, Ponda Warrior boasts a bankroll of $340,956 on the season and $457,156 lifetime.

Leading trainer Tyler George had a big evening on the card, teaming up with Trace Tetrick to score three victories with Major Crocker A, Macs Big Boy and General Dolan. The three victories put George’s total at 120 for the meet, establishing a new all-time single season training victories record at Harrah’s Hoosier Park. The previous mark was 119 victories, first established by Jeff Cullipher in 2018 and matched by Tyler George in 2021.

Harness racing continues at Harrah’s Hoosier Park on Saturday, Nov. 19 with a 14-race card set to get underway at 6:15 p.m. The Grand Circuit finale on the 2022 season comes on Black Friday, with the second edition of the Thanksgiving Classic on Nov. 25 with all four divisions of three-year-olds once again highlighting the card. The Black Friday card gets underway with a special post time of 4 p.m., with a free concert from Flynnville Train following live racing on the Terrace Showroom Stage at 9 p.m.