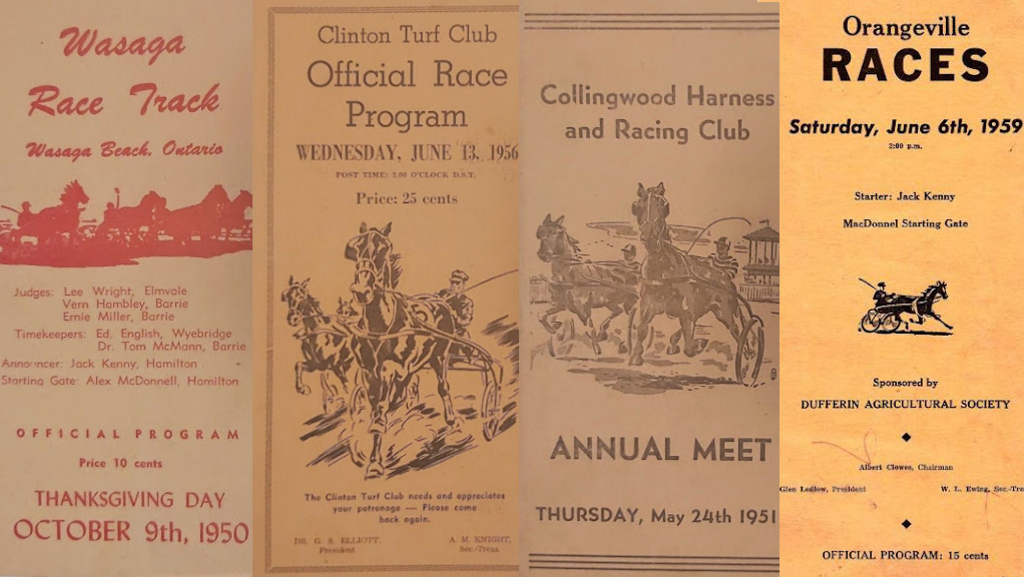 In this week's Rewind Robert Smith has gathered a bevy of old race programs from the era when one day harness meets were held at many small town tracks across the land.  He has displayed portions of each of the vintage programs,  or "scorecards" as they were often called back then. Each one is accompanied by a short commentary related to the location. 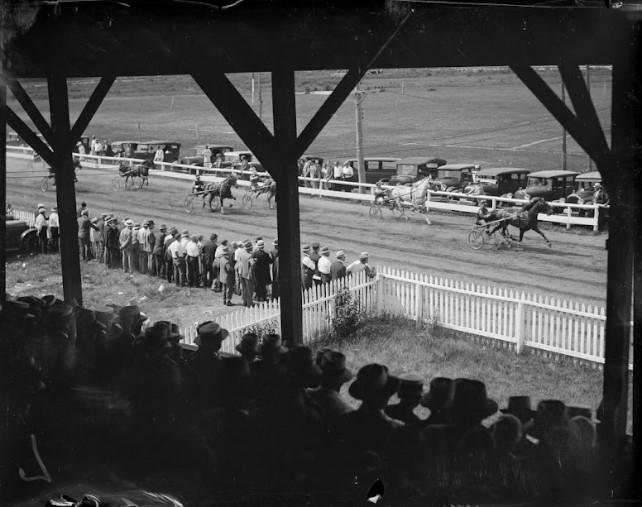 A view from the grandstand at an old time race meeting

This week's topic has always been a particular favourite of mine, dating back as far as I can remember.  Race programs have fascinated me from a young age.  When my father went out of town on a visit to a racetrack I always studied the programs he carefully marked and brought home (sometimes with other goodies like U.S. candy bars and the like).  I could spend literally hours going over them and trying to figure out all the information they contained. The ones shown here today wouldn't take too long to read.

The early "score cards" contained relatively little information beyond the horse's name,  driver and owner.  At times a horse switched races and because the programs had been printed well in advance,  a race goer had to write in the name.  One facet of most of the old programs that remained constant was the inclusion of advertisers.  For a small fee a local business or even an individual could display their name and message at various spots on the card.  It all helped with the expenses incurred when a race day was held. 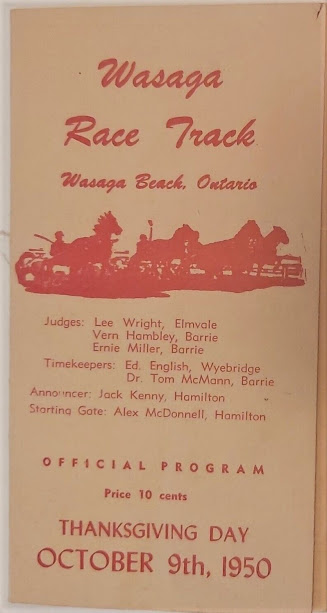 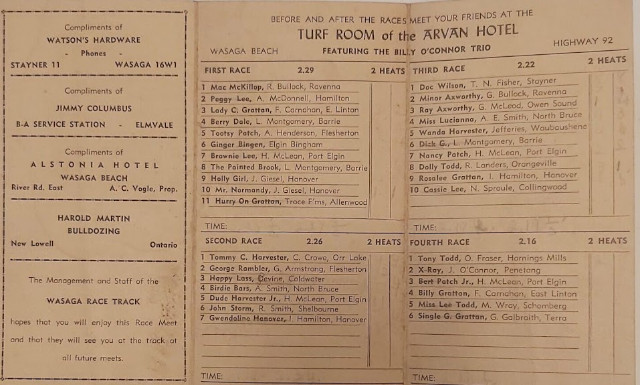 Oct. 9, 1950 - A day of racing was held on this date at the Wasaga Beach track and it was the fourth time that year that races were presented.  It featured four races each going two heats.  Handling the starting duties was Tom McDonnell of Hamilton accompanied by his 15-year-old son Bill along  with Jack Kenny serving as the announcer. Programs were available for sale at the gate for 10 cents each with the proceeds helping to defray costs for the day.

On the track the highlight of the day was a match race between Billy Grattan and Tony Todd with the former taking both heats for owner and driver Frank Carnahan of East Linton.  Originally billed (as shown on the program) as a six-horse event but apparently several did not enter the race so it ended up as a two-horse match race.

In the opener Mr. Normby won both heats for owner and driver Jacob Geisel Sr. of Hanover. In the second Dude Harvester Jr. was a two-heat winner for Hugh McLean of Port Elgin.  The other race was split between Dolly Todd for Robert Landers of Orangeville and Ray Axworthy owned by Gordon McLeod of Owen Sound. 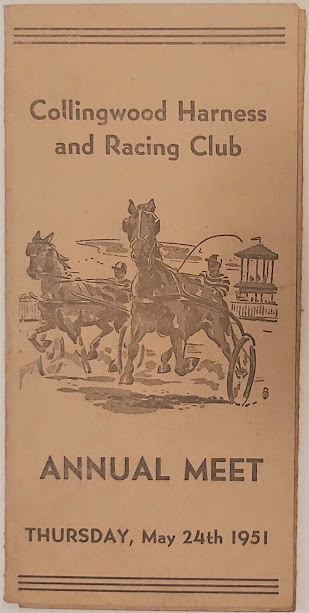 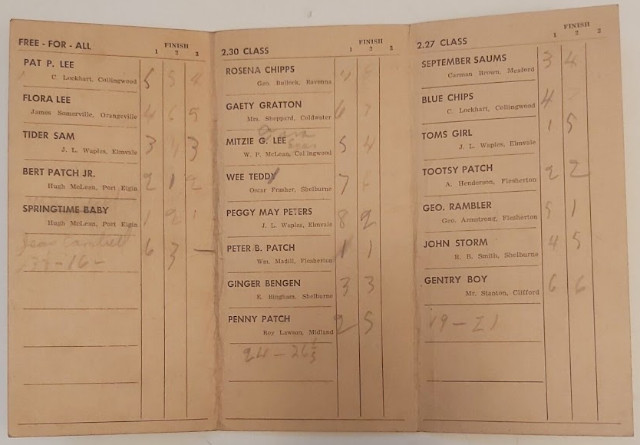 For many years in the Collingwood area the season unofficially opened with a day of racing at the local track.  A number of horsepeople started their careers there and went on to greater heights. On this day 11 heats were held and some still familiar names appeared throughout all of the races.  Winning drivers included Hugh McLean,  Orval Edwards, Bill Madill, Clarence Lockhart and Jacob Geisel Jr. I believe known as "Sonny" who piloted his own Bud Braden.  The winner of the Class 27 Trot and Pace event was Tom's Girl, a bay mare owned by J.L. Waples of Phelpston and driven by his young son Keith (27 at the time).

In the Free For All event which went three heats for a purse of $300,  a pair of horses both sired by Dan Patch Jr. had almost identical standings.  Nancy Patch was the winner with  1-2-1 for owner Robert Walker and Bert Patch Jr.  2-1-2 for owner A.A. Greer and driver Hugh McLean took second place.  I am guessing that Allan Walker, son of the owner, was the driver of Nancy Patch but the old summaries often did not show the driver. 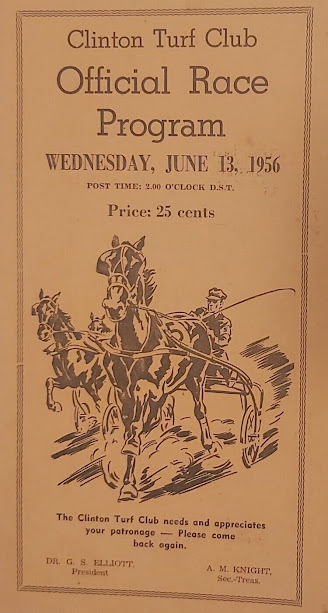 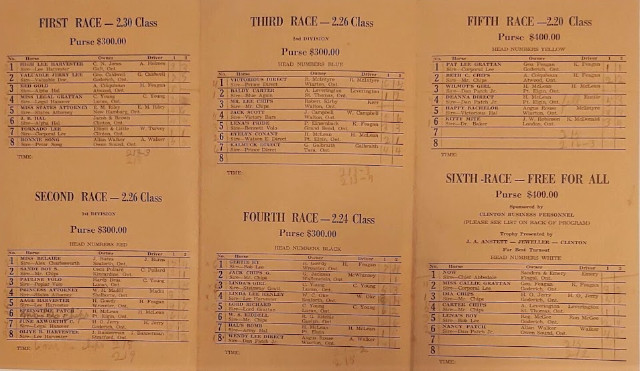 With a Wednesday afternoon post time of 2:00 on June 13th, a full card of racing was staged at the Clinton track. With President Dr. George Elliott at the helm and Sec. - Treasurer A.M. Knight, the Clinton Turf Club was in charge.  This program carried a price tag of 25 cents,  slightly higher than some of the others displayed.  This race meet showed a bit more organization as each race had a different colour for the head numbers.

This was a pretty big day of racing with a 2 p.m. post time.  The Free For All drew a field of six and carried the highest purse of the day at $400.  The winning horse was Carter Chips, owned and driven by Al Leverington of St. Thomas, Ont.

The winning horse in the day's opening race was the outstanding three-year-old pacing gelding Tornado Lee owned by Dr. Geo. Elliott, the President of the Clinton Turf Club and a highly respected local personality throughout his long association with harness racing here and wherever he travelled.  His red barn on the premises continues to stand as a memorial to this man.   He shared ownership with Jack Little, also of Clinton.  Tornado Lee won 12 races in 1956 and took a mark of 2:10 which was excellent for that era. 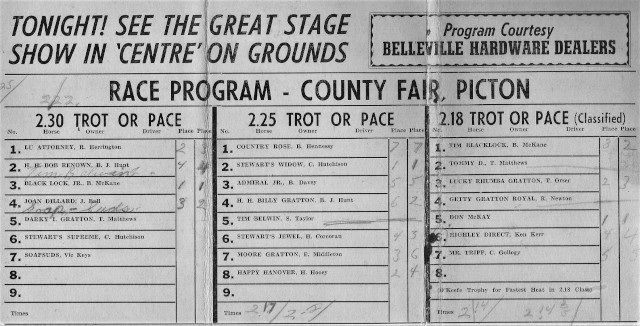 Sept. 18, 1957 - Picton's only race day of the year attracted a good sized crowd who were treated to a three-race card with each one going two heats.  A total of 16 horses were entered. Each race had double-heat winners who took home half of the $200 purse that was offered in each event.  The Picton program was the most basic of all shown today.  It was all printed on one side and did not show a price.  Perhaps it was Free!

The fastest mile of the day was 2:14 turned in by the amazing pacer Don McKay who also won the O'Keefe trophy awarded to the horse going the fastest heat in the 2:18 Trot or Pace.  This horse was 12 years old at this time and after starting his racing career in western Canada he moved to Quebec and eastern Ontario where he was a standout at the fall fairs for quite a few years.  During this season he made 45 starts and won 30 of those and earned a respectable $3,259 for owner and driver Ken Kerr of Goderich, Ont.

Other two-heat winners were Stewart's Widow for Cecil Hutchison of Kingston.  In the opener featuring green horses the double-heat winner was Blacklock Junior owned by Burns McKane, a well-known horseman also from Kingston.  This horse was seven years old and now sported a lifetime best of 2:22 taken that day.  His lifetime earnings jumped by $300 from $26 to $326 from seven starts that year. 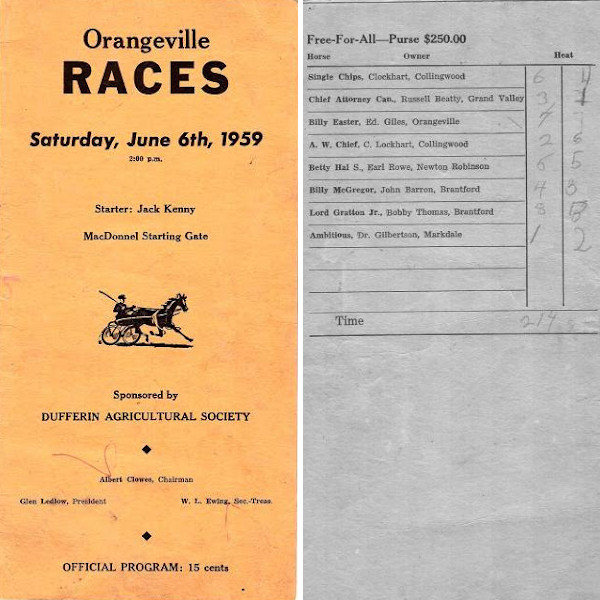 On Saturday June 6, 1959, all roads led to the Orangeville fairgrounds for the second of two race days that year sponsored by The Dufferin Agricultural Society.  For countless years dating back to the days of the famous Dr. Riddell,  harness racing was a popular pastime in this Dufferin County town.  Shown above is the featured Free For All the top race of the day.  Dr. Gordon Gilbertson was declared the winner with his good mare Ambitious.

I hope a few in the reading audience enjoyed seeing these old programs or perhaps "score cards" is more appropriate.  They are a reminder of the old days of racing.  As time marches on and the memories fade,  these simple old pieces of paper still tell quite a story.

Quote For The Week: "NO working between meals!" - Dr.'s orders for seniors. 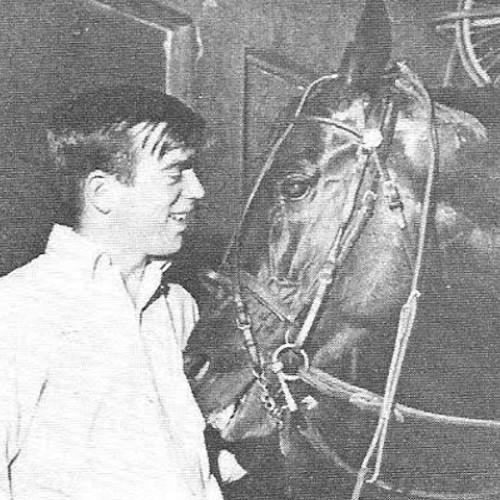 This young fellow started his very long career in Collingwood, his hometown.  Can you tell us who he is? Clue: This picture was not taken in the 1950's,  just a bit after.

Who Else Is It? 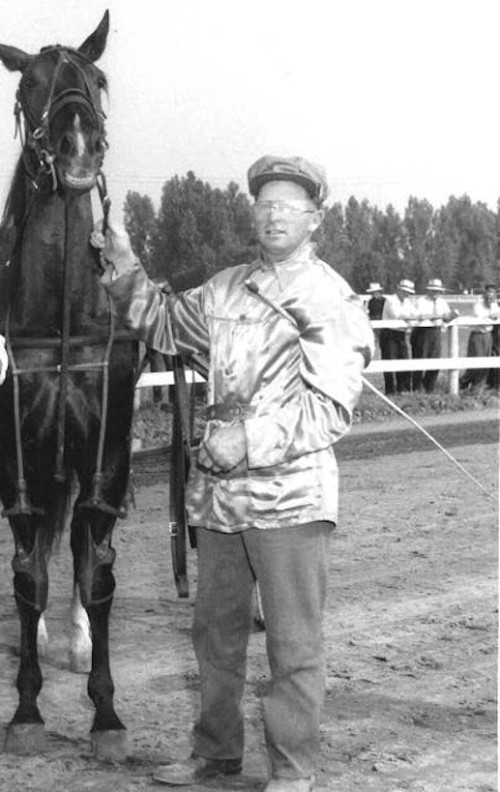 Can you identify this gentleman who was very much a part of one day race meetings in Southern Ontario for many years?

Blast From The Past 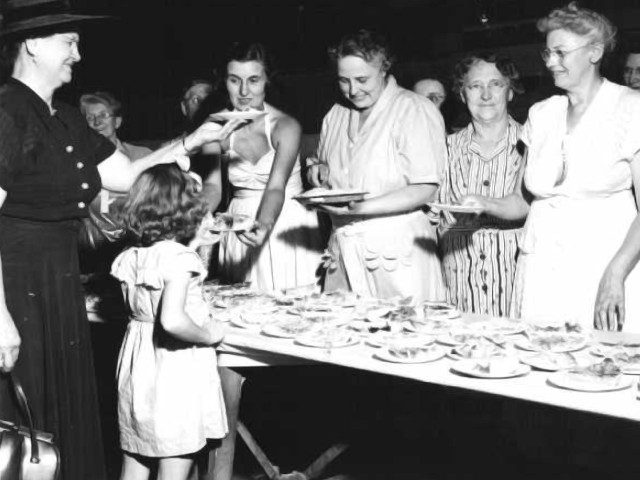 Racing in the "old days" was not always just about the races.  This great picture shows the "Pie Table" that was part of the great meals that were served at the New Hamburg, Ont. track on their annual race day.  Once the races were completed, which included the season's most prestigious race — The Canadian Pacing Derby — many of the visitors gathered for a delicious meal served by several local groups such as Church and Civic organizations. Pictured here are members of the New Hamburg Women's Institute.

I can't tell for sure what flavour of pies are available but "I'll have rhubarb, or apple or cherry or lemon or...."

Note: On this day the annual Canadian Pacing Derby was won by the great Dr. Stanton from Forest, Ont. - August 1950.

This week's pictures as usual failed to fool our experts. # 1 was John Burns, a Collingwood, Ont. native who enjoyed a very long stint as a non-driving trainer and in the process guided the careers of many great performers. I believe that he may have been pictured here with his own standout J R Spencer at the start of his career.
In the "Who else is it ?" photo was Levi 'Jiggs' McFadden a native of Dresden, Ont. , and a well known horseman of many years ago.
Thanks for sharing your time and your talents.

In reply to Robert you talked about Dr… by Gord Brown

Hi Gord. In answer to your question, yes that was indeed the same Dr. Gordon Gilbertson a veterinarian (and horseman) turned inventor who came up with the Quick Hitch which as you stated was a great invention. It was a Rewind topic back in 2014 which makes me wonder "Does time fly or what??" At that time a number of supportive individuals wanted to see "Doc" in the HOF. In 2017 that was accomplished perhaps due to their efforts. Thanks for reading.

Who is it- John Burns, maybe…

Who is it- John Burns, maybe JR Spencer
Who else is it -Levi McFadden

Robert you talked about Dr…

Robert you talked about Dr. Gilbertson is that the same person who invented one of the best inventions ever the Quick Hitch?

Picture from Collingwood is…

Who is it
Who else is it Jiggs Mc Fadden