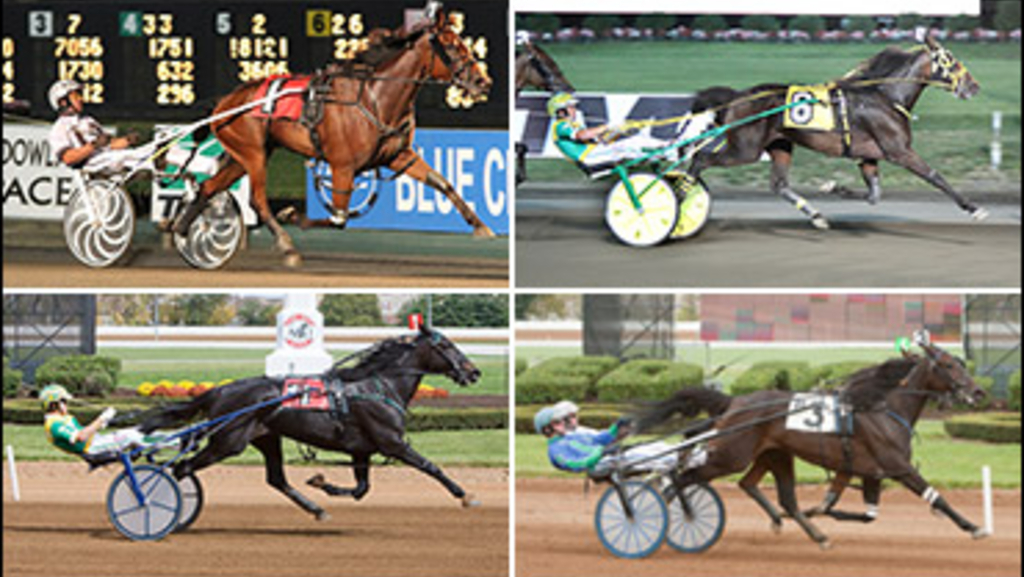 Entering this year, no four-year-old female trotter had ever won a race with a time quicker than 1:51.4. This season, five four-year-old mares went faster in victorious miles and another one equalled 1:51.4.

On Friday night, four of those six horses compete in the $250,000 Breeders Crown Mare Trot at the Meadowlands.

Mistery Woman, who is the current world record holder for a four-year-old female trotter thanks to her 1:51 triumph in the Allerage Farms Mare Trot at The Red Mile, is joined by fellow fleet-footed “fours” Classic Martine and Bee A Magician, both with marks of 1:51.1, and Handover Belle, who has won in 1:51.4.

It could produce a wide-open, not to mention quick, Breeders Crown event, particularly when five-year-old Dorsay, who was one of the previous world-record-holding four-year-olds, Ma Chere Hall, Charmed Life and Intense America are added to the equation.

“No one has really said anything (about this division), but it’s been unbelievable,” said Jonas Czernyson, who trains Mistery Woman, Ma Chere Hall and D’Orsay. “Everybody in there can do it, it’s anybody’s race. It’s whoever gets the best trip, I think.

“I think (Mistery Woman) could do it with the right trip. She’s done it before. Hopefully we can get her to bounce back to that again. It would be a good way to end the season.”

Mistery Woman finished third behind Handover Belle and Classic Martine in a Breeders Crown prep race last Friday. Handover Belle won by three-quarters of a length in 1:52.2. That time was only two-fifths of a second off Buck I St Pat’s Breeders Crown Mares Trot stakes record set in August 2009.

“We got a great trip, so I didn’t have to move her until the top of the stretch,” Matt Kakaley said after driving Handover Belle to victory in the prep race. “She got home pretty easy and did it pretty easy too. It’s just kind of a prep for (the final), but I think she’s got the talent. If the trip works out next week the way it did tonight, I don’t see why she couldn’t win next week too.

“Hopefully we’ll get a little luck and things will go our way.”

Classic Martine, Bee A Magician and Charmed Life are the three richest trotting mares heading into the Breeders Crown final.

The winner of nine of 17 starts this season, Classic Martine has earned $376,412. Her victories include the Armbro Flight Stakes, Miss Versatility Series championship, and Ima Lula Series final.

“She was awesome, very good,” driver Tim Tetrick said after the prep race. “I was very happy with her effort. My cover kind of backed up, if anything, and I had to go three wide early. Otherwise I catch (Handover Belle). She got to slide out and got the jump on me, but I was super happy with her effort.

“They’re good mares. My mare has made the most money and she’s been able to be on top in a lot of these. Hopefully it keeps going that way.”

Bee A Magician, who was the 2013 Horse of the Year and won the Breeders Crown for three-year-old female trotters in a stakes-record 1:52.4 at Mohegan Sun at Pocono Downs, finished fourth in the Mare Trot prep after leading at the top of the stretch.

“She was a bit flat, probably a little short maybe,” trainer Nifty Norman said. “It was good to get a prep. I was probably a bit easy on her (last) week, but she needs to improve quite a bit. It’s a good bunch, a good field.

“But it’s wide open next week, I think.”

Rene Dion knows he is sending a longshot in Intense America into Friday’s $250,000 Breeders Crown Mare Trot at the Meadowlands, but the Quebec-based trainer is hopeful the six-year-old daughter of Taurus Dream-Intensite can give a good account of herself.

Intense America has won one of 13 races this year and earned $18,387 for owner Ecurie Gaetan Bono Inc., and won eight of 49 lifetime starts for $273,475. In 2010, she won her elimination of the Peaceful Way Stakes and finished second in the final.

She has gone off stride in five races this year, although she rallied to finish third in one of them by trotting the second half of the mile in :55.3 over a “good” track at Woodbine.

“This year she has been struggling a little,” Dion said. “She’s a mare with speed; she just sometimes does not behave herself. If she does, I think she can get a piece of the pie. This year she is struggling, but in the years before, last year, she got a few good times (including a career-best 1:53 win at Mohawk Racetrack).

“We think she has speed and the owner wanted to put her in. I know it’s a big step up and I told that to the owner. We realize it’s not going to be easy, but if she behaves herself she could be a contender. I don’t think she can beat Bee A Magician or something like that. If she behaves herself, in the stretch she is usually pretty strong.”

In her most recent start on Nov. 7, a conditioned race at Woodbine, Intense America took the lead from post nine in a :27.2 opening quarter-mile and remained in front until the stretch before getting beaten by a length.

“Last time out she was in front by four or five (lengths) and finished second, but I think she is better off the pace than on the front, so we will see how it’s going to go,” Dion said. “She’s strong willed, but she can be grabby and can be a handful behind the gate, but after that she’s usually pretty good.”

Following is the field in post order for the Breeders Crown Mare Trot: