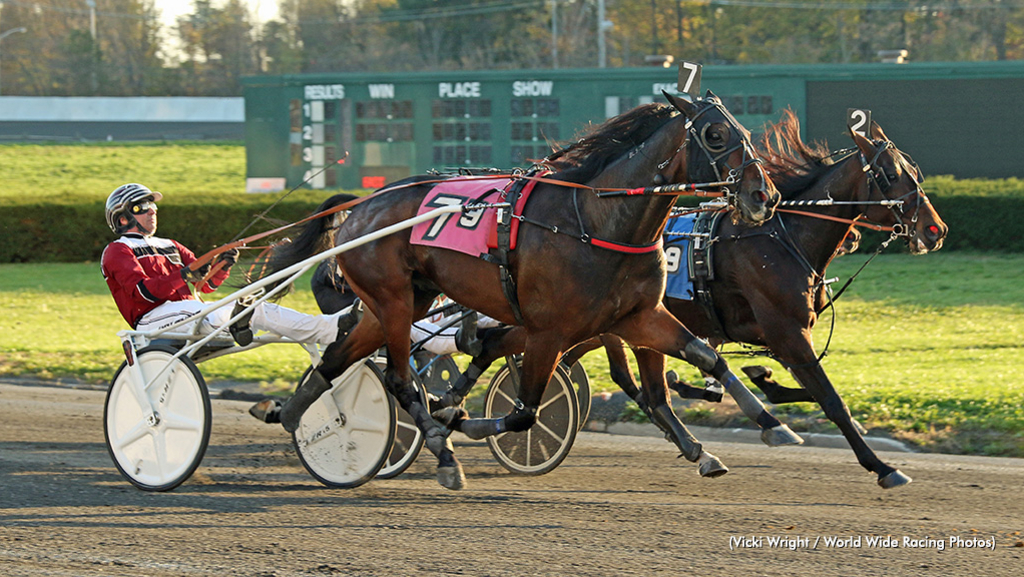 Tony Beltrami and Jacob Stillwell left the winners from a pair of races for the Amateur Harness Drivers Club (AHDC) at Freehold Raceway on Saturday afternoon (Nov. 12).

A mainstay on the amateur circuit, Dark Pool, put in a monster effort. The gelding was hung the entire mile and still had enough left to wear down the leader, Southwind Frost at the wire.

There was a mild early battle for the lead, but Southwind Frost (driven by Robert Hechkoff) secured the front quickly and began what was a well-rated mile. Dark Pool, who floated off the gate from post six, bided his time slowly making his way up the outside lane. Southern Swan Man (John Calabrese) followed his cover past the half with Grafenberg (Joe Faraldo) sitting chilly in the pocket position.

As the field past the five-eighths pole, Southern Swan Man swung three wide to try and pass what he thought was a tiring Dark Pool, but Tony Beltrami was having none of that. He kicked his horse into gear, rebuffing the outside bid and simultaneously drawing even with the leader. As they moved for the wire, Grafenberg took his shot down the passing lane, but it was Dark Pool who persevered through the tough trip to prevail by a neck in 2:00.4. Southwind Frost garnered the place spot with Grafenberg holding on for third.

Dark Pool, a nine-year-old Cantab Hall gelding, is owned by Tony Beltrami and Paul Fusco and is also trained by Paul Fusco. The bettors were treated to a nice price on this one with the consistent veteran returning $19.20 to win.

In the second division of the AHDC, J S Peyton, making his amateur racing debut, scored convincingly with a wire-to-wire victory under the confident guidance of Jacob Stillwell. The duo wasted no time shooting to the lead when the gate sprung and, with no other speed contenders, they were able to rate a leader friendly half in 1:00:4. Judge Ken (Matt Zuccarello) pressed the front-steper to the three-quarter pole, but Jake stepped on the gas and put that challenger away in a :29.4 quarter.

The only remaining threat was the post-time favourite Finnick Odair (Melissa Arbia), who was biding his time waiting to challenge the leader through the stretch. Melissa got the most out of her horse, but J S Peyton had too much left and was able to cruise past the wire with a length and a half victory in 2:00:1. Finnick Odair did hold on for second and Presidente Zette (Paul Minore) charged home to be third.

J S Peyton, a seven-year-old Swan For All gelding, is owned by Mo Coo Inc. and trained by Candace Brandstatter. The second choice in the betting returned $7.20 for the top spot.

The AHDC returns to Freehold next Saturday (Nov. 19) when the amateur club will be making a donation to the Veterans Charity HABCORE.