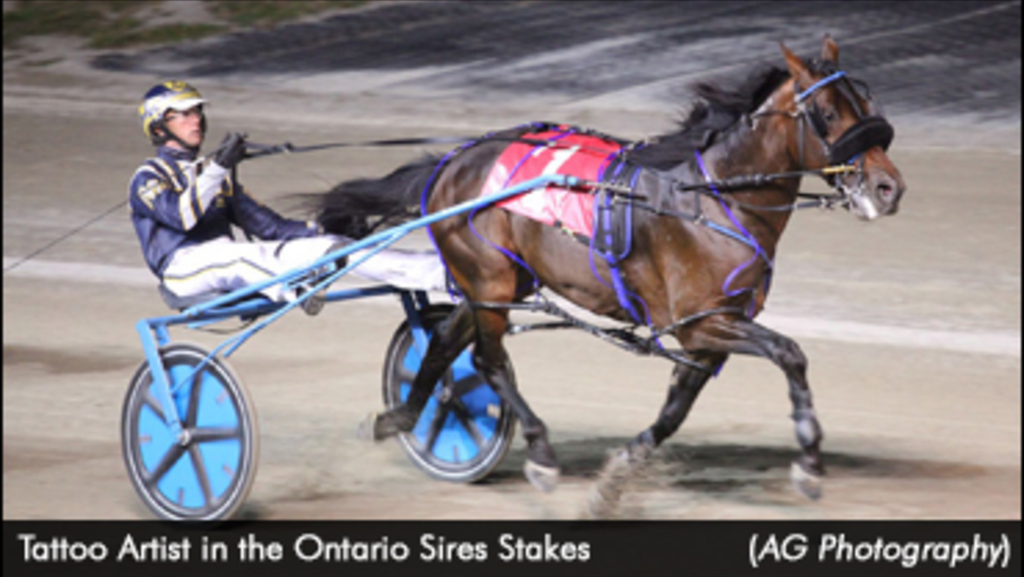 Sent off as the heavy favourite in Friday’s $155,600 three-year-old pacing colt Gold Series division, Tattoo Artist rewarded The Raceway at Western Fair District fans with a two-length victory in 1:53.2.

Driver Bob McClure hustled Tattoo Artist away from post one, but Sylvain Filion had a heavier foot on the accelerator from post four and Rhythm In Motion won the battle for early control, taking the field to a :26.1 opening quarter.

After firing away from post seven and advancing up the outside, Beaumond Hanover dropped in behind Rhythm In Motion as the colts advanced around the second turn, so heading for the :54.4 half, McClure sent Tattoo Artist after the leader.

“I said to many people before the race, one of the last spots I would have wanted was the rail or the eight-hole,” said McClure. “You don’t want the rail when you’re the favourite. You want to be the last one to the lead and, at London, it’s such a tight track, you can get caught very flat-footed leaving the gate from the rail, which all the drivers know, so I knew there would be a couple blasting from the outside.

“I could have left Jody [Jamieson] out there to be parked [with Beaumond Hanover], but then I’d have been in a hole the rest of the race and I didn’t want that, so I figured the only way to give my horse a fair shot was to drop Jody and take my chances first-up, and luckily it worked out,” the Rockwood, Ont. resident continued. “I got to tuck into the two-hole for a little while and braven up and take another run, and my horse showed a lot of grit and class. He raced an awesome trip today and I was very proud of him.”

“He struggled here last year, but I was pretty confident [tonight],” said trainer Dr. Ian Moore, who also started seventh-place finisher Denali Seelster. “I did snug his hopples up a hole, and I did the other horse too, which I don’t think it hurt him any and probably steadied him a little bit. Anyway, we’re pleased with the result, and hopefully he’ll be a little better for next week now too.”

Moore and caretaker Giselle Loder will now shift their focus to having Tattoo Artist in peak form for the October 17 Super Final at Woodbine Mohawk Park. The top 10 point-earners will compete in the $250,000 post-season showdown.

“I’ll jog him, probably Thursday will be a training mile, and it won’t be too heavy for him,” said Cambridge, Ont. resident Moore. “We’re looking forward to next week; we’ve got five in the Finals -- him, Denali, the two fillies [Andra Day and Alumni Seelster] and Lawless Shadow.”

In addition to his Gold Series success, Tattoo Artist has also had a successful season in open stakes competition for owners Frank Cannon of Sanford, Florida and Let It Ride Stables Inc. of Boca Raton, Florida. The Hes Watching colt captured his Simcoe Stakes division and finished second in the $1 million North America Cup. Through 11 sophomore starts, Tattoo Artist has tallied eight wins and one second for earnings of $610,073.

In other Friday night action, Sir Pugsley made his Western Fair debut a winning one in the $11,500 Preferred 2 Handicap Pace, prevailing by a half-length over the favoured Tyga Hanover in 1:54 flat. J.R. Plante drove the six-year-old son of American Ideal for trainer Patrick Shepherd and owner Robert Woodburn of St. Thomas, Ont.