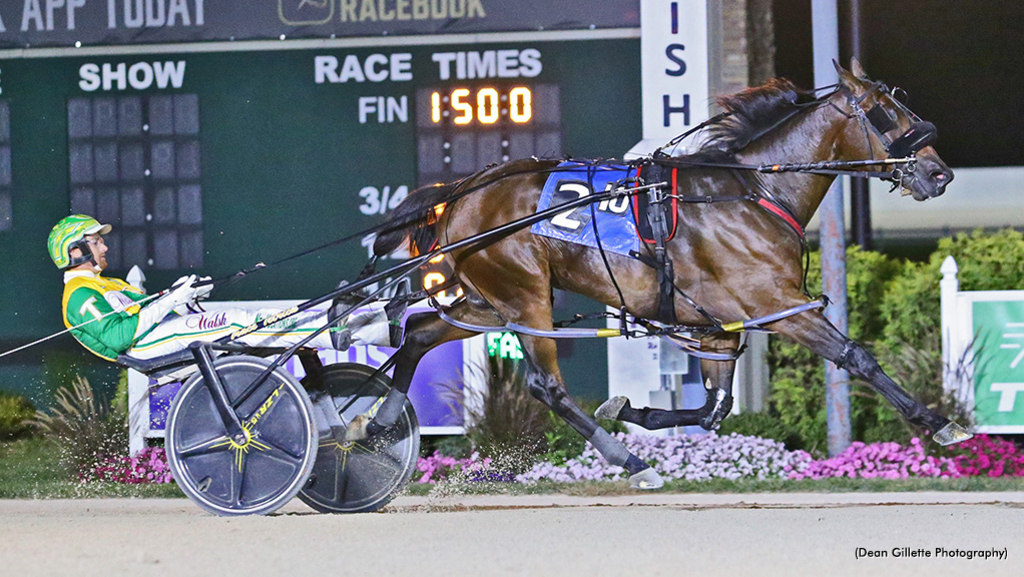 The final legs of Indiana Sire Stakes (INSS) action continued at Harrah’s Hoosier Park on Thursday (Oct. 6). Two divisions of the final leg for each the two-year-old trotting fillies, two-year-old pacing colts as well as the three-year-old trotting colts made up the second half of the evening’s card as the Hoosier State’s finest duked it out in their final chance to earn points before the quarter-million dollar Indiana Sire Stakes Super Finals on Friday, Oct. 14.

Upsets would prove to be the theme for the sophomore trotting colts on the evening, as the $49,500 first division kicked off the stakes action in the evening’s ninth race. Adamsville Road and Sam Widger scored the 6-1 upset, capitalizing off a ground-saving trip in the three-hole throughout the mile before unleashing a vicious :27 final quarter to chase down the heavily favoured Ponda Warrior and Trace Tetrick. Adamsville Road snagged the victory right at the wire by a neck in 1:52.3 over Ponda Warrior. Muscledover and John De Long finished third. Adamsville Road returned $15.80 for his backers at the betting windows.

Trained by Harrah’s Hoosier Park’s two-time defending leading trainer Tyler George, it was the sixth victory in 14 seasonal outings for the gelded son of Swan For All. Bred by Joyce McClelland, Adamsville Road has now banked $129,890 this season for owners Mel Rose Stable and Joe Nesselroad.

Sam Widger struck again with an upset in the $49,500 second division, this time with the 13-1 shot Nasey. Leaving from post 5 in the field of nine, Widger positioned Nasey perfectly in the pocket spot before converting the trip into a 1:54 victory by a half length at the line over Iwont Backdown As and Tony Hall. Nasey paid $29.40 at the mutuel windows with the victory.

It was the fifth win in 18 seasonal starts by the Walter Haynes Jr.-trained gelded son of Pilgrims Chuckie. Bred by Roman Stoll, Nasey pushed his career bankroll to $95,435 for owners Black & White Stable, with $69,395 of that coming in 2022.

The freshmen proved more formful in Indiana Sire Stakes, with the Fox Stake winner Coach Stefanos (pictured above) scoring decisively in the $70,000 first division for two-year-old pacing colts and geldings. With leading driver Trace Tetrick behind, Coach Stefanos waited patiently as David Allen Whoa and Joey Putnam cut hot early fractions before moving first over at the half and powering home with a :27 final quarter to open by three lengths at the wire in a lifetime-best 1:50. Buzzsaw Russ and John De Long finished second with David Allen Whoa holding for third.

It was the sixth win in 10 tries for the Erv Miller trainee, who has banked $182,555 for owners Kenneth Duffy, John Stefanos and D&M Trading II LLC. Bred by Victory Hill Farm, Coach Stefanos is a gelded son of Tellitlikeitis out of the Rocknroll Hanover mare, Watch N Be Watched.

Sam Widger picked up a third stakes victory on the evening and fourth win on the card as Art It Is scored in the $70,000 second division for freshman pacing colts in the nightcap. Leaving from post 8, Art It Is never saw the cones the entire mile, finding himself first over at the top of the stretch before digging in gamely with a :27.2 final quarter to fend off a surging Hetolditlikeitwas and Peter Wrenn by a nose at the wire in 1:52.

The victory was the third consecutive for Art It Is and fifth in eight starts for the Mark P’Pool trainee. Bred by Legacy Acres, Art It Is pushed his career bankroll to $149,720 with the score for owners Dolne Farm Services LLC, Therese DeFabis and Mark P’Pool. Art It Is gave sire Tellitlikeitis the sweep of the freshman pacing colts, and is out of the Dream Work mare JNB N Me.

Favourites prevailed as well in both divisions for two-year-old trotting fillies, with Helpoftheseason getting the job done in the $68,000 first division at even money. Peter Wrenn navigated traffic from the second tier in post 10 in the field of eleven, doing so to perfection in the early stages before taking command up the backstretch and digging in gamely in the stretch to score by three-quarter lengths in 1:55.3. Ts Pride and Trace Tetrick finished second with Marys Magic and Jordan Ross rounding the trifecta at 46-1.

The lightly raced filly by Helpisontheway picked up her fourth victory in six starts, having yet to miss the board for trainer Melanie Wrenn. Owned by Wrenn Racing LLC and John Schmucker, Helpoftheseason goes into six figures for career earnings with $132,175 in the bank. Helpoftheseason was bred by Ben Wittmer Jr and is out of the Angus Hall mare, Torches Star.

In the $68,000 second division, Yo Beth D returned from a miscue north of the border in the Mohawk Million last time out with a dominant score in Indiana Sire Stakes. Leaving from the pylons, driver Trevor Smith took full advantage of the post position, immediately taking control of the race and never looking back to score by over four lengths in 1:55.3. Longshots Myrll Valley, with Dale Hiteman at 68-1; and Youdocabo, with Matt Krueger at 39-1, finished second and third respectively.

Trained by Todd Luther, it was the sixth victory in nine starts in 2022 for owner Greg Luther Racing LLC. With the victory, the daughter of Helpisontheway out of the Cantab Hall mare, Yo Beth D has now earned $174,650 on the season. Yo Beth D was bred by John Schmucker.

Indiana Sire Stakes action continues on Friday (Oct. 7) at Harrah’s Hoosier Park with the last leg for both the three-year-old pacing colts and fillies, as well as preps for the aged stars ahead of next week’s Hoosier Champions night highlighting the 14-race card.