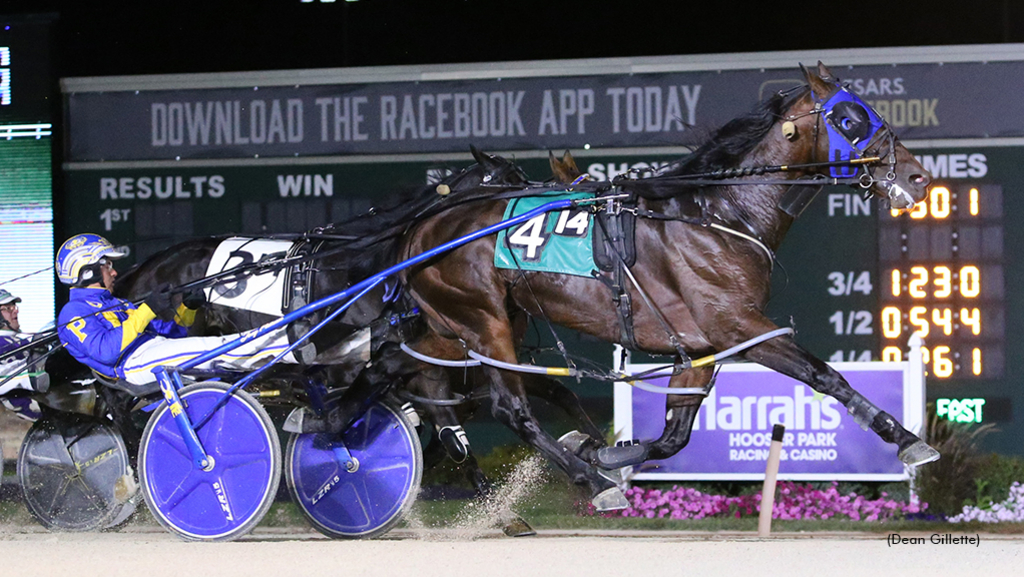 Two $50,000 divisions for the pacing fillies and a single $97,500 division for the pacing colts highlighted the 14-race card in what would be their last chance to earn points for the Indiana Sire Stakes Super Finals on Friday, Oct. 14 as part of the $2.3 million Hoosier Champions card.

Fresh off of defeating older mares in an Open 3 competition in her last outing, JKs Rollin Baby impressed with a dominant performance in the first Sire Stakes split for pacing fillies.

Leaving from post four, driver Mike Oosting put JKs Rollin Baby into play from the outset, taking the field to the opening quarter in a hot :26.2. JKs Rollin Baby would get no breathers in the early stages, hooking up with Best Place To Be and Sam Widger up the backstretch as the two tangled to the half in :55.1. Oosting used the inside advantage on the far turn to regain control of the lead and gain separation by two lengths on the field at three quarters in 1:24.

In the stretch, JKs Rollin Baby powered home with a :27.4 final fraction to maintain the lead she built, scoring by more than two lengths at the wire in 1:51.4. Always Gonna B You and Hall of Famer David Miller navigated traffic in the stretch to get up for second. JJ Endofanera and Trace Tetrick closed well on the far outside for third.

Trained by Erv Miller, JKs Rollin Baby earned her eighth victory in 15 seasonal outings. JKs Rollin Baby has earned $178,696 this year for owners Engel Stable of Il, Flatrock Stable, Louis Willinger and George Golemes, and now more than a quarter of a million dollars for her career. Bred by Mahlon Lambright, she is a daughter of JK Endofanera out of the Rocknroll Hanover mare, Rock N Roll Baby, making her a full sister to the undefeated division leader in the two-year-old pacing filly ranks in Indiana, Rollin Rosie.

In the second Sire Stakes division for the pacing fillies contested as the evening’s 13th race, Marvelous Marshia extended her win streak to four heading into Hoosier Champions with a stirring stretch rally.

Leaving from post seven in the field of nine, driver John De Long opted to take back with Marvelous Marshia in eighth as Need To Breathe and Sam Widger cut out the opening quarter in :26.2. David Miller gave Jewelsbewithus a turn at the lead up the backstretch, sending her to the front end at the half in :56.1. In a busy mile, driver Don Eash got aggressive with 70-1 longshot Majors Miracle, powering to the lead on the far turn from third and getting the field to three quarters in 1:24.2 as Marvelous Marshia and De Long could see them all from ninth, fourth-over with more than seven lengths to make up.

Marvelous Marshia swung wide in the stretch and began to gobble up ground with every stride as the powerful Always A Virgin filly thundered home in a :26.2 final quarter, sweeping the field to score by more than a length in 1:52.1. Need To Breathe and Widger navigated to passing lane to get up for second, with Jewelsbewithus picking up the third spot.

Marvelous Marshia is now a winner in seven of her 13 starts in 2022 for trainer Roger Welch while banking $157,040 for owners Marsha Lewis-Veitia along with William, Patrick and Mia De Long. Bred by Marc and Maynard Bontrager, Marvelous Marshia has now banked more than $200,000 in her career.

Starting from post four, Soaring Now and driver Joey Putnam settled in fourth in the early going as JK Victory and Trace Tetrick led the full field of 11 into the first turn through an opening quarter of :261. JK Victory had things his way to the opening half in :54.4 before Putnam sent Soaring Now into motion first-up heading into the far turn. The two sons of JK Endofanera hooked up on the turn, with Soaring Now putting his nose in front at three-quarters in 1:23.

The duel continued deep into the stretch before Soaring Now finally put away a resilient JK Victory late in the lane with a :27.1 final quarter to hit the wire a length in front in 1:50.1. JK Victory finished a hard-fought second while Rip Wheeler and Brandon Bates finished third.

Trained by Aaron Stutzman for owner James Miller, Soaring Now scored his sixth victory from 12 starts in 2022. A Grand Circuit winner in 2022 with a victory in the $140,000 Jenna’s Beach Boy in September, Soaring Now added to his lofty bankroll with earnings totalling $341,300 this season. A colt by JK Endofanera out of the Mach Three mare Sunflower, Soaring Now was a $6,000 bargain buy at the Hoosier Classic Yearling Sale. He was bred by Luckiana Farm.