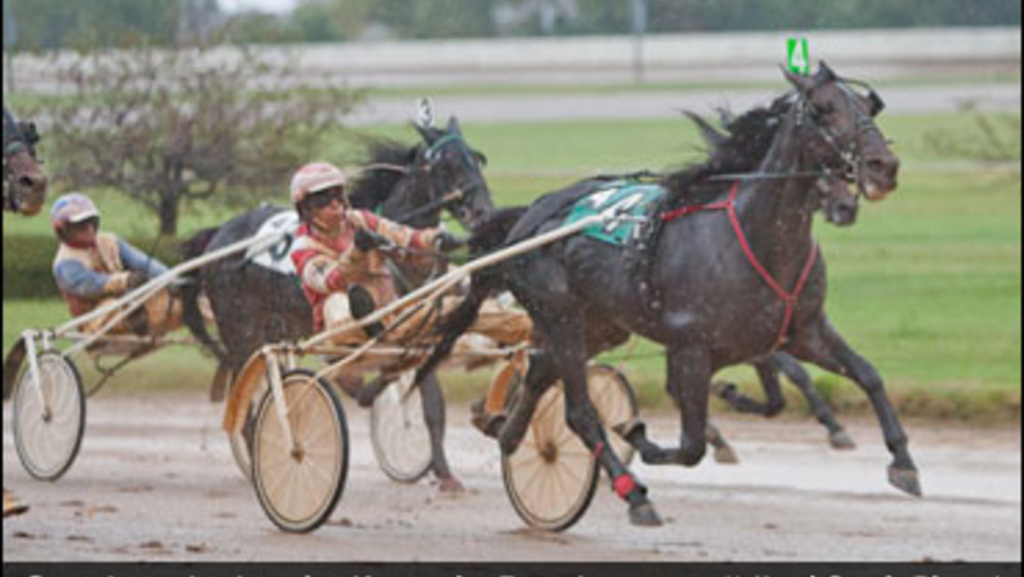 Creatine played giant killer in Sunday’s 121st edition of the Kentucky Futurity at The Red Mile, and in doing so he gave driver Mike Lachance back-to-back titles in the final jewel of trotting’s Triple Crown. 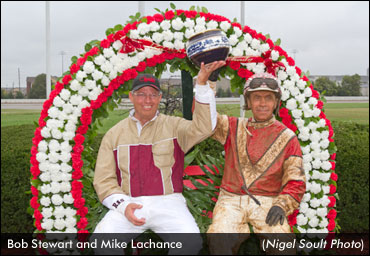 Lachance, who captured last year’s edition with My MVP, angled off cover with the Bob Stewart-trained Creatine en route to the 1:53.2 score.

Race favourite Royalty For Life laid down fractions of :27.4, :55.4 and 1:24, but he weakened late and left the door wide-open for a host of backfield challengers. Creatine kicked off cover and splashed home to capture the lion’s share of the purse. All Laid Out was the runner-up, and third prize went to Spider Blue Chip.

Sent off at odds of 15-1, Creatine lifted his lifetime earnings to $526,435 with the win for Diamond Creek Racing of Wellsville, Pennsylvania. It was his fourth win of the season and the seventh of his career.

Lachance now has four Futurity wins, having also earned victories in the prestigious event in 1991 with trotting mare Whiteland Janice and 1999 with Self Possessed.

Here’s a recap of what transpired earlier on the card:

Two-time O'Brien Award winner Check Me Out and her longtime rival Maven hit the wire together in a thrilling photo finish, but it was Maven who gained the slight advantage late to score the stakes victory.

Leaving from post six, Check Me Out (Tim Tetrick) powered to the lead and opened up a pair of lengths on her foes by the :27.4 opening quarter mark. She proceeded to the half in :55 and three-quarters in 1:23.3 while her arch nemesis was flushed first over from third. Check Me Out was confronted by Maven in the stretch, and despite drifting out, Maven managed to get her nose to the wire first in 1:52.3. Bax Of Life (John Campbell) closed from second over to show.

The four-year-old Glidemaster-M Stewart mare, who also won the Armbro Flight and Miss Versatility Series Final this year, is trained by Jonas Czernyson for owner William Donovan. She is now eight-for-11 in her aged campaign, adding $331,985 to her million-dollar bankroll.

Your So Vain made a bold move to the lead in the backstretch in the second elimination of the Kentucky Futurity, and it proved to be the winning move for the Brad Maxwell trainee.

In rein to Tim Tetrick, who won for the sixth time on the card, the three-year-old son of Donato Hanover-Tennis Lover watched Spider Blue Chip chop out the opening split in :29 before taking matters into his own hands. Your So Vain and Tetrick rushed up to engage Spider Blue Chip in a half-mile station battle of :59 before Your So Vain muscled to the top. He took the field to the three-quarter pole in 1:26.4 and then used a :28.2 closing quarter to win in 1:54.4. Spider Blue Chip was second best, with All Laid out finishing third. Also advancing to the second heat were Lindys Tru Grit and Wheeling N Dealin who finished fourth and fifth, respectively.

The victory was the fifth of the season and the sixth to date for Your So Vain, who is owned by P G Van Camp Stables of Port Perry, ON, now boasts a bankroll that stands at $408,575.

The top five finishers from each of the eliminations will return for the $368,900 second heat of the Kentucky Futurity. Here’s how they’ll line up behind the starting gate:

The Hambletonian and Canadian Trotting Classic champion left from post four and was rated through fractions of :28, :56.2 and 1:25.2 en route to the 1:53.3 victory.

The homebred RC Royalty-Bourbon N Grits colt will enter the Futurity Final with seven wins to his credit from 12 starts this year and a seasonal bankroll of nearly $1.27 million. He is owned by breeder Alfred Ross, Raymond Campbell, and Paul Fontaine.

Golden Receiver, who last visited the winner’s circle on May 11 at The Meadowlands in a leg of the TV FFA Series, found his way back to victory lane despite horrible weather conditions in Sunday’s Allerage Farms Open Pace Final.

In customary fashion, the eight-year-old son of Village Jove-Royal Gold sprinted the field through fractions of :28.1, :55.3 and 1:22.4 before being collared coming into the lane by Clear Vision. Golden Receiver dug down deep, however, and reclaimed the lead in deep stretch en route to posting the 1:50 decision. Clear Vision was next best and Sweet Lou rounded out the top three finishers.

Corey Callahan engineered the winning trip with the Mark Harder trainee, who won for the ninth time this year and for the 58th time in his career. Owned by the New York partnership of Our Horse Cents Stable of Clifton Park and Nina Simmonds of Binghamton, Golden Receiver increased his lifetime earnings to $1,948,968.

Following a weather delay due to heavy rains that rolled in mid-card, the track was downgraded to 'sloppy' for the Allerage Mares Open. But the weather didn't deter Shelliscape from rallying home off cover to win her debut for new owner Bamond Racing LLC and trainer Richard 'Nifty' Norman.

Drop The Ball (Corey Callahan) worked her way to the top spot during a :27.2 opening quarter and proceeded to lead the field of talented mares through middle fractions of :56.3 and 1:24.1. Meanwhile, favourite Rocklamation (Yannick Gingras) moved underway from third with Shelliscape and Tim Tetrick following her cover. Rocklamation eventually wore down the leader in the stretch, but Shelliscape came flying by to score the mild 5-1 upset in 1:51.2. Longshot Camille (Matt Kakaley) closed on the far outside to steal the runner-up honours from Rocklamation while Drop The Ball finished fourth.

The victory was the fifth of the day for the hot-handed Tetrick.

Shelliscape, a daughter of Artiscape, earned the third win of her four-year-old campaign and 11th lifetime while boosting her bankroll over the $700,000 mark. 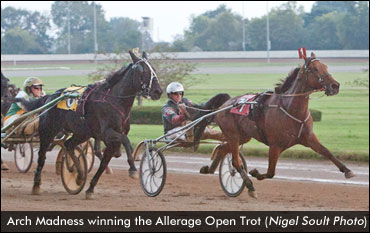 Arch Madness hasn’t been drinking water from his bucket these past few weeks – apparently he’s been slurping it from the Fountain of Youth. The ageless wonder, who turned in a world record performance at The Red Mile last week, went over $4 million in lifetime earnings thanks to his win in the Allerage Farms Final.

The nine-year-old son of Balanced Image-Armbro Archer sat just off the lead for trainer/driver Trond Smedshammer, who watched Quick Deal hammer out splits of :27.1 and :55.1. Sevruga attacked the leader around the final turn and showed a short lead at the three-quarter pole in 1:24, but Arch Madness kicked off his cover and drew clear to win in 1:51.3. Mister Herbie came on late to finish second, with the show dough going to Market Share.

It was the 34th lifetime win for the Ontario Sires Stakes graduate, who is owned by New Yorkers Marc Goldberg of Woodmere and Willow Pond LLC of Hewlett. The homebred is now 3-for-15 this season.

Arch Madness is the first Canadian-sired trotter to surpass the $4 million earnings mark. 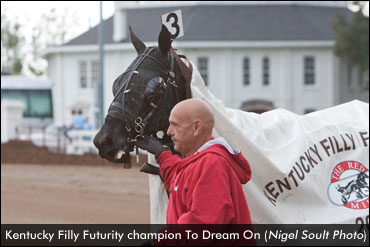 To Dream On rallied off cover for trainer/driver Jimmy Takter to win the second - and final - heat of the Kentucky Filly Futurity as a 13-1 upsetter in a career-best clocking of 1:52.1. The three-year-old daughter of Credit Winner-Satin Pillows, who was just 1-for-12 on the season going into the race, picked a great time to step up her game.

Takter watched Shared Past throw down a :26.4 first panel, and that filly was under the gun in the middle stages of the mile thanks to steady pressure from the first heat winner, Ma Chere Hall. With a half of :54.2 and a three-quarter clocking of 1:23 in front of her, To Dream On catapulted off Ma Chere Hall’s cover in the lane and surged to the top en route to the victory. Ma Chere Hall was a determined runner-up, with Shared Past finishing a respectable third.

“She can be a little bit grabby like she was in the first heat, I had a bad horse in front of me that didn’t take me anywhere. She was too grabby there, so I stayed outside and as long as she didn’t get excited too much and then I got good cover from Corey [Callahan driving Ma Chere Hall],” said trainer/driver Jimmy Takter. “I was waiting and waiting and waiting because she’d been having so many problems this year. This win was very sweet for her because I know she’s just a super horse. She was running into a lot of issues and it’s been a long road with her. Thank God I have good owners.”

“Jimmy and I just agreed out here on the racetrack. That’s it, she’s retired,” said co-owner Marvin Katz. “Jimmy suggested that, and I’m all for that.”

Katz shares ownership on the 10-time winner with partners Al Libfeld and Sam Goldband. Together they’ve watched her assemble a 10-2-3 record from 22 lifetime starts. Today’s performances helped boost her bank account to $968,077.

Ma Chere Hall was treated to a pocket-trip by Corey Callahan, and the Jonas Czernyson pupil popped the deuce in the lane and drew clear to win in 1:52.4 over a track rated ‘good’.

Classic Martine rolled to the early lead, but she was prompted to the quarter pole in :28.1 by the parked out Ma Chere Hall. The latter brushed to the front in the backstretch, and she proceeded to lead the field to the mid-way point in :56.1. Frau Blucher made a bold move to the lead shortly past the half, and she was in charge of the tempo at the three-quarter pole in 1:24. The leader weakened coming off the final turn and that allowed Callahan to tip his charge to the outside and blow by. Ma Chere Hall fended off a late surge from race favourite Classic Martine, who finished second, while Mistery Woman settled for third.

“Ronnie [Pierce driving Frau Blucher] come at my hard and I just turned him loose and figured I’d save her as much as I could for the second race,” said driver Corey Callahan. “I popped her out there and she held off Timmy’s [Tetrick driving Classic Martine] filly. She’s a very good filly. Ma Chere digs in through the lane, so she’s impressed me every week.”

Ma Chere Hall, a three-year-old daughter of Deweycheatumnhowe-Margarita Hall, now owns a 7-2-0 record from 11 starts this season. The 10-time winner, who is owned by her breeder, Walnut Hall Limited, along with Aldebaran Park Inc and Joe Sbrocco, bumped her lifetime earnings to $438,658 with the victory.