On the toteboard for the $186,000 Allerage Farms Open Pace, McWicked and American History were almost inseperable. On the racetrack, it wasn't even close.

It was McWicked by open lengths. 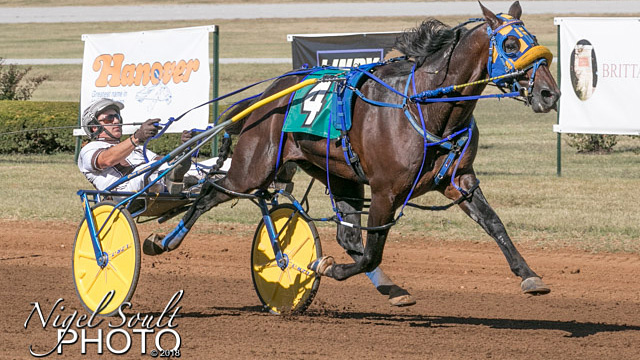 Driver Brian Sears changed tactics with McWicked and placed him forwardly off the gate in the field of nine, sitting pocket behind longshot Dorsoduro Hanover (Matt Kakaley) through fractions of :26.4 and :53.2. With Courtly Choice (James MacDonald) starting to encroach first-over, Sears pulled the pocket with McWicked before the three quarter station. As that marker was reached in 1:21.1, McWicked was making a dent in the lead and fully cleared turning for home. With the backfield fanning out, McWicked had plently left in the tank after that half-mile pocket ride and sizzled home in :26.1 to trip the timer an open length victor in 1:47.2. Filibuster Hanover (Yannick Gingras) edged out stablemate Dorsoduro Hanover for second with 9/5 favourite American History (Joe Bongiorno) fourth.

"Everybody knows I've always battled foot issues with this horse, it's been a non-stop battle," said trainer Casie Coleman after the win. "His first start back he won in :49 and I thought 'wow, we're going to have a huge season' and then that foot blew right after that first start. I missed about a month and I had to go into the Mohawk Gold Cup off a month off and it just really messed up his early schedule but he's back on track now."

The win for McWicked was the 39th of his career, lifting his career bankroll to $4,914,893. Coleman trains the 2018 Horse of the Year for Ed James' SSG Stables. McWicked will head to Yonkers for the $250,000 Dan Rooney Pace on the International Trot undercard on Oct. 12 before a date at Woodbine Mohawk Park to defend his Breeders Crown title.

We haven't seen Lather Up in

We haven't seen Lather Up in over a month, since the CPD. If McWicked wins The Rooney, The Breeders Crown, and The TVG, I think that he, not Lather Up, should be named Older Pacer Of The Year.