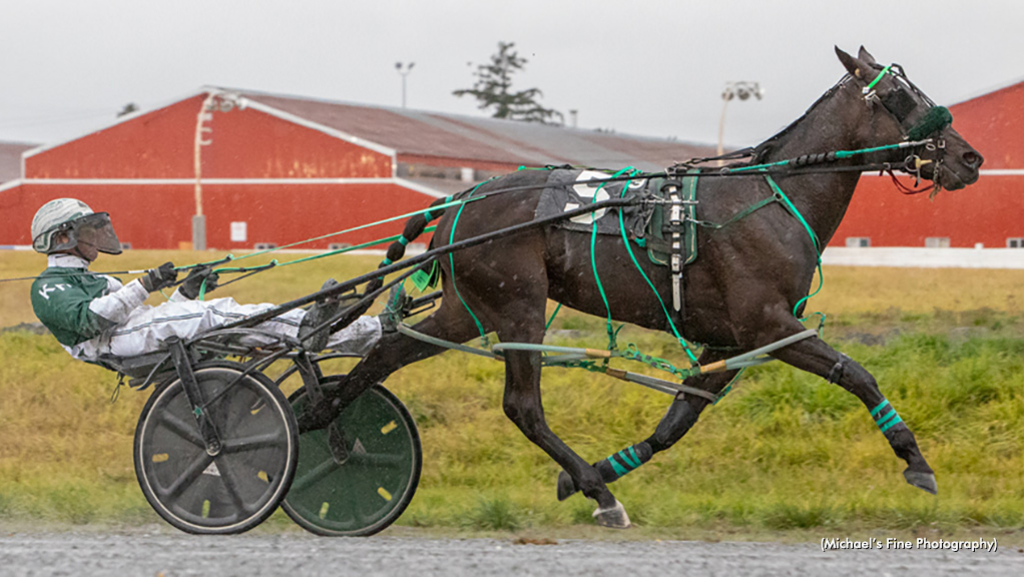 Chris Lancaster trainee Mickie Mantle notched another win in the Robert Millbank Memorial as he eyes a series sweep off his fourth preliminary win on Sunday afternoon (Oct. 30) at Fraser Downs.

Driver Kelly Hoerdt hustled Mickie Mantle, the 1-9 favourite, to the fore and controlled to his terms through the mile. The Custard The Dragon colt strolled through fractions of :28, 1:00.4 and 1:30 under minimal threat before kicking for home to win by 2-3/4 lengths in 1:58.3. Domi rode the pocket to finish second with Rilkoff taking third.

Hoerdt co-owns Mickie Mantle with Fred Gilbert. He has now won four races – all in the Robert Millbank Memorial – from seven starts and banked $38,098. He paid $2.10 to win.

Shots Fired brushed for the lead around the far turn to take the other $15,000 division of the Robert Millbank Memorial. The Jim Marino-trained son of Custard The Dragon raced third while Dillon James carved fractions of :28.1, :59.3 and 1:28.3. Moving for three-quarters, driver Dave Kelly tipped Shots Fired off the pegs and dug into Dillon James through the final turn and in the stretch to then power past and emerge 1-1/4 lengths better in 1:57.4. Lukes Proclamation closed for third and Pop N Like Pez took fourth.

The $20,000 lone dash for the Betty Millbank Memorial fourth leg also went to Jim Marino, who swept three of the top four spots with Side Piece taking the large prize as the 3-5 favourite. The daughter of Shadow Play sat pocket to stablemate Snowpeak, who set a tempo of :29.1, 1:00.3 and 1:29.1 before bearing the pocket presence off the turn. Side Piece powered past to a 3-1/4-length win in 1:58.1 over Snowpeak, with Heart Of A Dragon third and another Jim Marino trainee in Center Piece taking fourth.

Marino co-owns Side Piece with owner-breeder J J J Stables. She collected her third win from five starts to push her bankroll to $24,600 and paid $3.20 to win.

Armycaptin Hanover captured his fifth consecutive victory in the $10,000 Open Pace to cap the card. The six-year-old Captaintreacherous gelding again sat off the speed while Tiempo Hanover cut fractions of :27.1, :58.2 and 1:26.2 before launching into action for trainer-driver Kelly Hoerdt and sliding to a length victory in 1:55.1. Armycaptin Hanover, co-owned by Hoerdt with Blair Corbeil, now has 32 wins on his resume of 101 starts and $207,301 to his account.