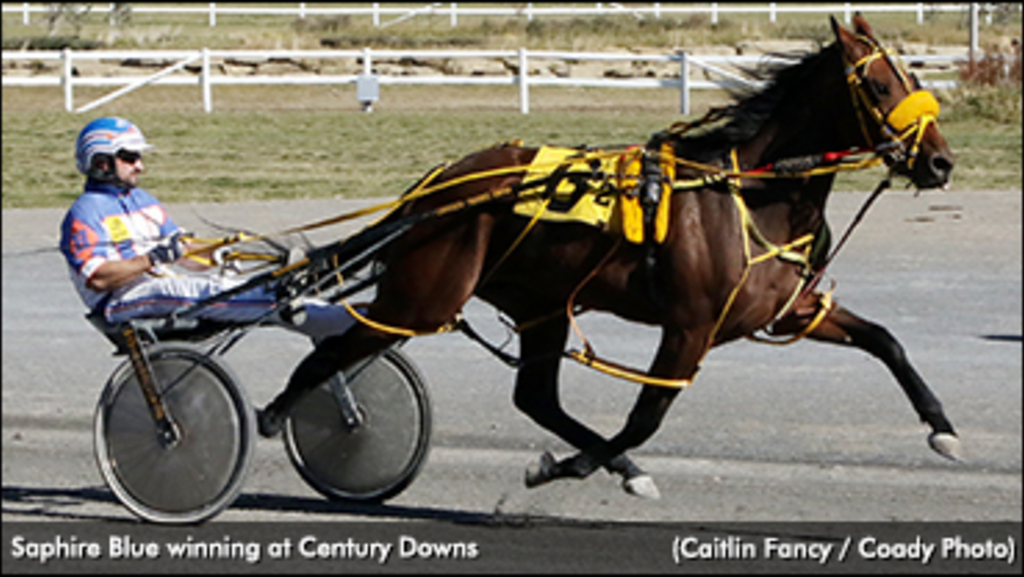 Harold Haining trainee Saphire Blue kept her undefeated streak in tact with a fifth consecutive victory, this one coming in a 1:57.4 blowout in the first of three $17,100 divisions of the Alberta Sires Stakes (ABSS) Stardust – for two-year-old pacing fillies – on Sunday (Oct. 3) at Century Downs.

Driver Michael Hennessy hustled the daughter of Vertical Horizon to the top passing a :28.2 first quarter and slowed the tempo towards a :57.4 half. She continued up the backside in a mild clip as Two Fingers Gold crept uncovered towards the top. By three-quarters in 1:27.1, Saphire Blue turned away Two Fingers Gold and rolled into the stretch widening her advantage to the beam. She bested The Final Rose by 8-1/4 lengths while Two Fingers Gold took third, another two lengths behind, and Eyes On The Prize rallied for fourth.

Divine Art took the second division of the ABSS Stardust in front-stepping fashion, winning by open lengths in 1:57.1.

Leaving from post two, Divine Art pocketed pylon-starter HF Flower to a :29 first quarter and faced little challenge from there. Past the half in :58.2, Divine Art accelerated to the backstretch and opened five lengths to three-quarters in 1:26.3. She coasted from there to the finish 4-1/4 lengths better than Metaki taking second, with Jamaica Move another five lengths behind in third. Crazybeautifultome closed from last for fourth.

The last division of the ABSS Stardust went to pocket-popping Wrangler Jewel, who delivered as the odds-on choice in 2:00.3.

Cozey Up cleared control to a :28.3 first quarter with Wrangler Jewel sitting second and Go On Bow Bow in third. With the tempo slow to a :59.4 half, Go On Bow Bow angled first over out of third but had little to give in the march up the backstretch, faltering to three-quarters in 1:30.2. Cozey Up cruised around the final turn until Wrangler Jewel tipped out of the pocket and promptly put away the pacesetter through the stretch. Proud Of My Roots rallied to take second, beaten 1-1/4 lengths, while Cozey Up settled for third and Katie Lou finished another five lengths behind in fourth.

Wrangler Jewel broke her maiden with the victory and pushed her bankroll to $17,275 for owner and co-breeder Dr. Maurice Stewart. Phil Giesbrecht piloted the Marie Brooking-trained daughter of Wrangler Betonme, who paid $3.50 to win.

Vegas Gambler grabbed the lead in the final stages of the first $17,100 division for the ABSS Shooting Star – for two-year-old pacing colts and geldings – to score as the 1-5 choice in 1:57.3.

Ponggo pushed for the lead from the pylons and set an uncontested clip of :29.1 and :59 before tiring on the move up the backstretch. Subzero circled to the lead heading to three-quarters as Lets Tie One On marched uncovered with Vegas Gambler in tow. Quickening to the third station in 1:27.1, Subzero battled for the lead to the inside but gave way to the outer two nearing the line. Vegas Gambler charged with the most momentum to the center of the track and slid a half-length in front of Lets Tie One On to win. Order One To Go took fourth, another 10 lengths behind third-place finisher Subzero.

Joe Dimagio survived a first-over grind to win the second split of the ABSS Shooting Star in 1:58.3.

Trainer/driver Kelly Hoerdt settled Joe Dimagio into the pocket behind So Strange to a :29.2 first quarter before making his move. He angled the Custard The Dragon colt off the pegs and raced wide of So Strange through a 1:00 half and to three-quarters in 1:28.2. The pressure eventually mounted on So Strange as he gave way to Joe Dimagio through the stretch by a half-length while Needabankloan gave chase in third. Prairie Pursuit followed from second-over for fourth.

Co-owned by Hoerdt with Blair Corbeil, Joe Dimagio won his second race from five starts, pushing his earnings to $15,177. He paid $3.50 to win.

Ladner Lad completed a sweep of the ABSS events for the favourites when striding clear to a 1:58.1 victory in the final Shooting Star division.

Restless And Wild led the field to a :29.2 first quarter before yielding command to Ladner Lad by the stands first time. Ladner Lad then led to a :59 half before upping the tempo in the backstretch to three-quarters in 1:27.3. Farasthe Eyecansee gave first-over pursuit up the backside and around the final turn, but raced one paced through the lane as Ladner Lad extended his lead to 4-1/2 lengths at the beam. Knockin Boots closed to take third with Chuck You Farlie finishing fourth.

Trained and driven by Jamie Gray for owner and co-breeder Wild Dunes Stables, Ladner Lad won his first race from five starts, pushing his earnings to $16,875. The Mystician colt paid $5.60 to win.

Mrs Suhwiggins wired her competition to win the co-featured event on the afternoon, an $8,100 Filly & Mare Pace. The five-year-old Custard The Dragon mare led through a clip of :27.4, :56.4 and 1:25.2 to just hold onto victory by a half-length over her persistent stablemate Moosette. Lady Neigh Neigh finished third, another seven lengths behind.

Owned by J J J Stables, Mrs Suhwiggins won her fifth race from 16 starts this season and her 22nd from 62 overall, pushing her earnings to $293,138. Dave Kelly drove the $4.20 winner for trainer Michael Campbell.