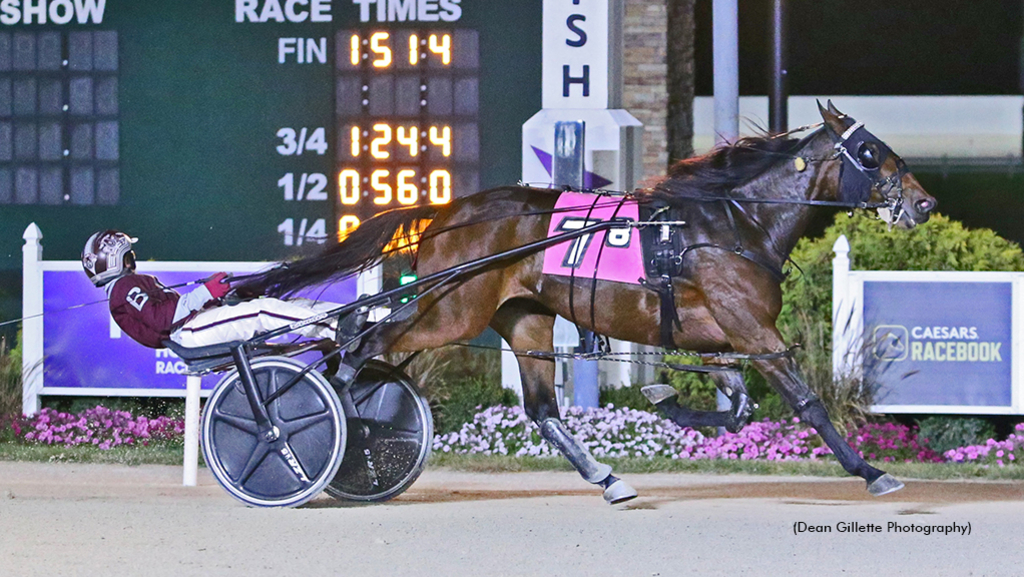 Leaving from post seven in the field of eight, driver Atlee Bender opted to steer Cash Infusion mid-pack in fifth as Anthony McDonald cut out a hot opening fraction of :26.4 under fire from Funky Wiggle and Kyle Wilfong.

Funky Wiggle cleared on the backstretch and Wilfong tapped the breaks lightly to the tune of :56 at the halfway point as Bender hit the gas with Cash Infusion and began their march first-over. Cash Infusion powered to the lead on the far turn, pushing past Funky Wiggle at the three-quarter station by a half-length in 1:24.4.

Bender kept the pedal down in the stretch as Cash Infusion gained separation on the field behind the power of a :27 final quarter, scoring the victory by five lengths on the wire in 1:51.4. Jusmakinyalook and Jordan Ross rallied up the rail for second, with Brickhouse Babe and Trace Tetrick rounding out the trifecta.

The 1:51.4 clocking was a new track record for three-year-old filly trotters. The previous record was 1:52, established by Next Level Stuff in the 2020 Breeders Crown final.

Trained by Erv Miller, Cash Infusion picked up her fourth win in 18 starts in 2022 for owners W. J. Donavan, Purnel & Libby LLC, Joe Sbrocco and George Ducharme Stable LLC. With the score in the $31,300 Circle City, the daughter of Chapter Seven out of the Cash Hall mare, Swing Anna Cash, has now banked $164,968 this season and just shy of a quarter-million for her career.

The $31,000 first division of the Circle City for the three-year-old filly trotters kicked off the stakes action on the evening, with world champion Bluebird Dove scoring her second consecutive stakes victory.

Starting from post two in the field of seven, Bluebird Dove and driver Peter Wrenn waited patiently from third as Luv Lorelei and Robert Taylor set the early fractions. Bluebird Dove waited until she saw the passing lane in the stretch before exploding with a :26.4 final quarter to score the victory by a length and a half in 1:53 over Luv Lorelei, with Agnelonia and Trace Tetrick finishing third.

The win, which followed a score in the Pegasus Stakes last Friday, was the eighth in 17 seasonal starts for the three-year-old rookie trained by Melanie Wrenn. Owned by David Mc Duffee and L&L Devisser LLC, Bluebird Dove has banked $226,306 for her career. Bluebird Dove is an Indiana-bred daughter of Swan For All out of the RC Royalty mare, Goosebump Hanover, and was bred by Daryl Miller.

The New York-bred Patsville was a repeat winning in stakes action as well, taking the $61,500 lone division for the three-year-old filly pacers following a score in the Pegasus Stakes last time out.

Trained by Tabatha De Long, Patsville is now a winner of five of 16 starts in 2022 and has banked more than $200,000 on the season for owners William and Patrick De Long. Patsville was bred by Ross Bonafield and is a daughter of former Meadowlands Pace champion Huntsville out of the Art Major mare, Major Master Piece.

Continuing the trend of the evening, Sweet Boy Ben followed up his Pegasus Stakes win with yet another, scoring in the $30,000 first split for the sophomore trotting colts.

Driven by Harrah’s Hoosier Park’s all-time leading driver, Trace Tetrick, Sweet Boy Ben sat mid-pack throughout the mile while Ohio superstar Rose Run Xtra cut the mile in the early stages as the heavy 1-5 favourite. Sweet Boy Ben and Tetrick went on the offensive first-over on the far turn, storming to the front and never looking back in the stretch with a :27.3 final quarter to score the victory by 1-3/4 lengths in 1:54. Swan Flyer with John De Long was second and Jeff Cullipher stablemate Tug And Coop with Aaron Merriman finished third.

Sweet Boy Ben picked up his third win of the season in his 19th seasonal start and the fifth win of his career for owners Pollack Racing LLC and Jeff Cullipher, who also trains the gelding. The son of Swan For All out of the Muscles Yankee mare, Blue Muse, has earned $91,141 in 2022 and more than $140,000 for his career.

Leaving from post two, Ponda Adventure settled in third in the early stages as Erv Miller stablemate and Atlee Bender set torrid opening fractions of :26.3 and :54.4. Ponda Adventure and Tetrick ventured to the outside on the far turn and went on the attack, engaging the leader at three-quarters in 1:24. Ponda Adventure did what he has done the majority of his career and dug deep with a :28.2 final quarter and secured the 1:52.2 victory as Dover In Motion and Ricky Macomber Jr. surged from the backfield before going off stride just prior to the wire. Dover In Motion was disqualified from second to fourth, resulting in Delgado and John De Long being placed second, and Caviar Gold with Aaron Merriman being moved up to third.

The 1:52.2 score was a lifetime best for Ponda Adventure, who has yet to finish worse than second in 25 career starts. He has 20 career victories and has banked more than $350,000 in 2022 alone and $628,537 for his career. Ponda Adventure is a gelded son of Swan For All out of the Muscle Hill mare, Wildflower, and was bred by Pond A Acres. He is owned by Engel Stable of IL, Louis Willinger and Jerry Graham.

The night concluded with yet one more repeat stakes winner, with Yourwishisgranted going down the road in the $61,500 three-year-old colt pace.

Driver Michael Oosting wasted no time putting Yourwishisgranted on the engine, working hard three-deep on the turn before clearing and never looking back from there. The gelded son of JK Endofanera dug deep in the lane, fending off the pocket-sitting Sure Thing Herman with Atlee Bender and Barrys Berries with Brett Miller to score in a lifetime-best 1:49.4.

Trained by Matt Rheinheimer, Yourwishisgranted entered the race off of a 1:51.3 upset score in the Pegasus Stakes on Oct. 21. Yourwishisgranted is now a three-time winner in 17 starts in 2022 and has earned $73,340 on the season for owner Bill Huggins. Bred by Indiana’s leading breeder, Victory Hill Farms, the $22,000 yearling purchase out of The Panderosa mare, Onawish Hanover, has banked more than $130,000 for his career.

Racing continues at Harrah’s Hoosier Park on Saturday, Oct. 29 with a 14-race card set to get underway at 6:15 p.m. Saturday night features Hoosier Park’s annual Fright Night at the Races. Guests are encouraged to come out to the track for Trunk or Treating, live entertainment, food trucks, as well as the horse costume contest in the front paddock, which begins at 5:30 p.m.