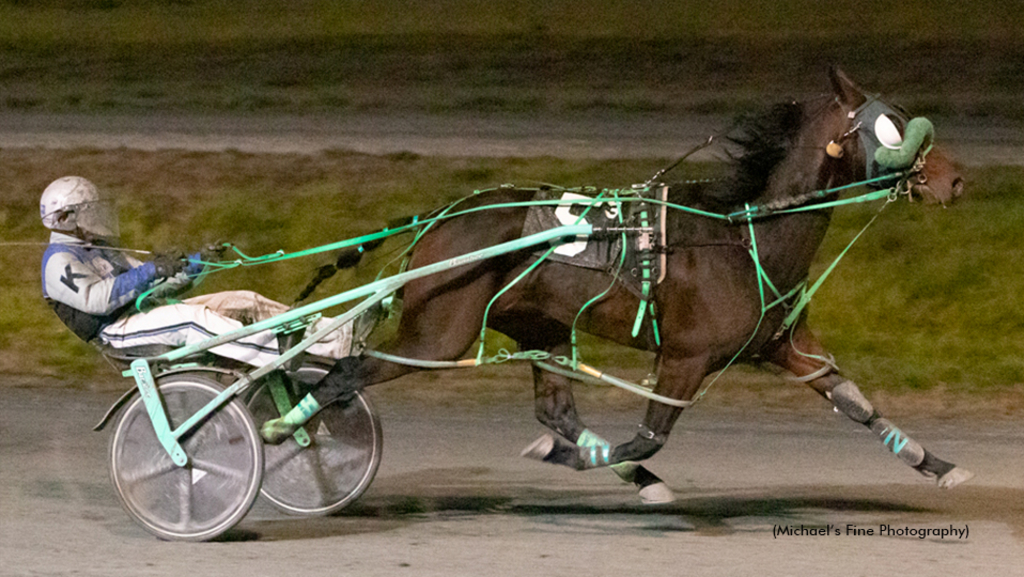 Sophomores were the stars of the show Monday evening at Fraser Downs as the oval hosted leg three of the Mary Murphy for filly pacers and the Robert Murphy Memorial for colt and gelding pacers.

Lets Tie One On earned his third straight score in the preliminary legs thanks to a come-from-behind tally for the tandem of driver Scott Knight and trainer Chris Lancaster.

The son of Vertical Horizon-Just One More got away third in the $15,000 affair while Joe Dimagio stormed to the lead and threw down first-half fractions of :27.2 and :57.1.  Lets Tie One On attacked first over on the way to the three-quarter pole, and he prompted Joe Dimagio past that post in 1:26.1.  Lets Tie One On then used a :27.4 closing frame to win by 2-1/4 lengths over Joe Dimagio in 1:54.  Minnekhada Joe was third.

Joe Rich was a gate-to-wire winner in the second division for the team of driver Brandon Campbell and trainer Jim Marino.

The son of Custard The Dragon-Cant Stop Rockin powered to the top from Post 5 and then sliced his way through fractions of :27.3, :57.2 and 1:26.2 before kicking home in :28 to win by a head over the late-driving favourite, Itll Be Fine, in 1:54.2.  Taking home the show dough was Chuck You Farlie.

J J J Stables, Jim Marino and Paul Sanders share ownership on the seven-time winner who has banked just shy of $90,000 in his career.

After failing to win when favoured in the second leg of the series, Shes Bodacious was sent off at long odds in Monday’s third leg.  She had just enough in reserve to manufacture a 15-1 upset for her connections.

David Kelly fired her to the lead from Post 8 and together they led the group through fractions of :28.2, :57.3 and 1:26.4 before slipping home in :30 to win by a neck over River Boat Rosie in 1:56.4.  The odds-on favourite, Gotta Wear Shades, recovered from an early miscue to finish third.

Ashley Ederer owns and trains the daughter of Custard The Dragon-Crystal Palace who won for the third time this season and for the fourth time in her career.  The win pushed her lifetime earnings past $60,000.

Shoot The Whiskey remains perfect in the preliminary legs of the Mary Murphy thanks to Monday’s narrow triumph for driver Brandon Campbell and trainer Jim Marino.

The daughter of Shadow Play-Arm In Arm got away third and held that position while Angelsonthehorizon (:28.4) and Tin Foil Hat (:57.4) supplied the early speed.  Tin Foil Hat was still in charge of setting the pace at the three-quarter pole in 1:27.1, but Shoot The Whiskey was on the move from first over and starting to press hard.  She kicked home in :29.2 to prevail by a head over Tin Foil Hat in 1:56.4.  Angelsonthehorizon was third.

Monday’s card also featured the $10,000 Fillies & Mares Open Pace, and it was Century Mach putting together a front-stepping score in the tilt for trainer/driver Kelly Hoerdt.

The four-year-old daughter of JK Royal Flush-Mach Away shot to the top from Post 5 and successfully sailed through fractions of :28.2, :57.3 and 1:26.1 before using a :28.1 final frame to win by a half-length margin over race favourite Moosette in 1:54.2.  Pirate Booty nabbed the third prize.