Three Ontario-based trainers will make their Breeders Crown debuts on Saturday night at Woodbine Racetrack, all in the same race. Ironically, they are all competing against another Breeders Crown first-timer, this one with the heavy favourite.

John Williamson has been in the harness racing business for more than 40 years, so it will be a special occasion when he watches his first Breeders Crown finalist -- Urbanite Hanover -- go behind the starting gate in Saturday’s $600,000 Breeders Crown for two-year-old male pacers at Woodbine Racetrack.

Where he watches the race, though, might be up in the air.

Williamson is scheduled to have hernia surgery on Friday. He hopes to be in attendance for the Breeders Crown the following evening.

“I don’t know how, but I plan to sneak over,” the 65-year-old Williamson said, laughing. “It’s OK. (Urbanite Hanover) is doing the racing, not me.”

Williamson is among four trainers in the race who are making their Breeders Crown debuts on Saturday. The others are Tony Alagna, who has 2-5 morning line favourite Captaintreacherous and Wake Up Peter, Corey Johnson with Captive Audience and Mark Austin with Fool Me Once. Danny Collins, with Twilight Bonfire, is making only his second trip to a Breeders Crown final.

“It’s been a long time coming,” said Williamson, who lives in Waterdown, Ontario and shares ownership of Urbanite Hanover with Daniel Haist of Ridgeville, Ontario. “But it’s all for him. The nice thing for me is just having a horse of this caliber. I’ve really enjoyed him this year.”

Urbanite Hanover is winless in nine starts, with three second-place finishes, and $56,130 in purses. He finished fourth in his Breeders Crown elimination, which was won by Wake Up Peter in 1:51.1. Urbanite Hanover was beaten by 3-1/2 lengths and timed in 1:51.4, with a :26.3 last quarter-mile split.

He was driven by Tim Tetrick in his elim, but Tetrick will handle Captaintreacherous in the final. Ron Pierce picks up the drive on Urbanite Hanover.

“Tim really liked him; he said he was full (of pace) but just had nowhere to go,” Williamson said. “That’s happened to him a few times this year, where he’s been locked in.

“If he’s right, he can come home good. The ‘Captain’ might not be beatable, but I’d like to get behind him and take a shot.”

Prior to the Breeders Crown elim, Urbanite Hanover finished second in a division of the International Stallion Stakes at The Red Mile, with Pierce at the lines. A week earlier in a Bluegrass division, he went off stride because of broken equipment. He also had a rough trip in the Champlain Stakes on Sept. 8 at Mohawk, racing on the outside for the entire mile.

“He has a real strong family and he’s a nice individual,” Williamson said. “It’s really hard to fault him. He wasn’t in the harness for three weeks when I thought I had something special. He’s been easy from the get-go.”

“Someone gave him the nickname because he was late losing his baby hair,” Williamson said. “But he’s anything but shaggy; he’s a gorgeous colt. He’s the nicest looking colt in the barn.”

Mark Austin’s first trip to the Breeders Crown also has a medical angle, but this time it is for the horse.

Fool Me Once was fifth in his elimination last week. Afterward, Austin found the colt was sick. He trained Fool Me Once on Thursday morning and was hoping for the best.

“I just blew him out and he’s got a little more life to him,” the 52-year-old Austin said. “I hope we got it cleaned up. He didn’t really fire on the end of (the mile) last week and he had a perfect trip and a chance up the rail. But (as sick as he was) he should’ve been worse.

“I’d feel better if he was healthier and we didn’t draw the best post. But it’s still exciting. You take what you can get and hope for a little racing luck.

“Captaintreacherous looks like he’s in a league of his own. It looks like the rest of us are racing for minor shares.”
Fool Me Once headed to his Breeders Crown elimination, which was won by Wake Up Peter, off two stakes wins at The Red Mile during the Grand Circuit meet.

A son of Art Major-Fool That I Am, Fool Me Once has won four of nine starts this season and earned $127,226. He is owned by Austin and Daniel Smith, both from Ontario.

Fool Me Once is a full-brother to multiple-stakes-winner Feel Like A Fool and was purchased under the name Foolish Fishman for $70,000 at the Standardbred Horse Sale. His family also includes millionaire I Am A Fool, who won the 2003 Breeders Crown for 2-year-old male pacers.

Austin typically trains a stable of 15 to 18 horses. He was introduced to harness racing by his uncle, Bud, and got into the sport full time after high school. He has averaged $586,000 in purses over the last seven seasons, including $605,944 this year.

“My uncle had one horse; he was a fireman and I used to go out and help him on the weekends,” Austin said. “That’s how I caught the horse bug. I finished high school and went to work for a couple guys. I struck out on my own when I was 21 and I’ve been on my own ever since.”

Most of the headlines have been reserved for the Metro and Wilson winner Captaintreacherous. 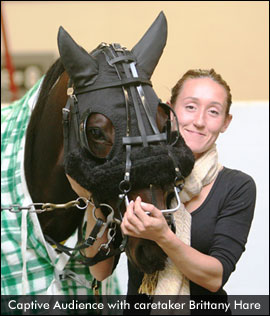 “I think if we can get on his back we can go with him,” said Captive Audience’s trainer Corey Johnson about his promising two-year-old colt pacer.

“We changed his shoes this week going from steel up front to aluminum,” said Johnson. “I trained him this morning [Wednesday] at Mohawk and he handled it well.”

Johnson has also added earplugs to the list of equipment the Art Major colt will wear in the big dance.

The trainer thought Captive Audience raced well in his elimination heat finishing third behind Wake Up Peter, but didn’t think the uncovered trip was his strongest suit.

“I’m not sure he raced that great in the elimination,” said Johnson. “He’d never been first up before.”

For most of the season Captive Audience has been raced strictly from off the pace. The team departed from that strategy in the $261,829 Champlain where the colt left strongly for the front and then got covered up on his way to an impressive career fastest 1:50.2 victory.

“We tried him on the front end in his race before the Breeders Crown elimination,” Corey said. “I think he was a little green and didn’t know what to do.”

At the same time Captive Audience did display extreme speed on October 8 at Woodbine pacing a :54.1 back half in handy fashion. Captive Audience’s preferred racing style isn’t going to be an asset on Saturday considering the $95,000 Harrisburg yearling purchase of his father (Colin) and partner Mac Nichol, drew post 10.

“The 10-hole is a tough spot. I’m not sure how the race will go, but I hope Brian [Sears] can work out a third over trip,” said Johnson.

While Captive Audience did defeat Crown competitor Rockin Amadeus and the highly regarded Odds On Equuelus in the Champlain, his best finish to date against Captaintreacherous were a pair of third place finishes in the Nassagaweya and Metro eliminations. In both races he was going forward in the stretch.

“I’m not sure anyone can go with Captaintreacherous,” the trainer said.

Still with so much money riding Johnson is hopeful his horse can get into the race and have a chance to show his speed.

“He’s got a :26 second quarter in him,” he said with confidence.

Brian Sears will once again be in the sulky hoping to improve on the third place finishes. Captive Audience has won just twice in nine starts this year with $176,245 in earnings, but he could add significantly to that with a good effort in the Crown.

“He’s not that big a colt and we’re hoping he grows up a bit for next year,” said Johnson. “This will be his last start of the year.”

Captive Audience has a solid pedigree being from the top New York-based sire Art Major out of the $316,588 winning mare Captiva Island. She is by Western Hanover out of the 57-time and $1.6 million winning Sanabelle Island. Art Major is a double-Crown winner at age three and four and has sired one champion: Santanna Blue Chip, the 2007 freshman Crown winner.

First race post time for Saturday’s Breeders Crown card is 6:30 p.m. The Score, Canada’s all-sports channel, will carry the $6 million Breeders Crown championships live from Woodbine Racetrack from 7 p.m. to 11:30 p.m. (EDT) and the broadcast will also be streamed live on MavTV in the U.S.

Entries for Saturday night's star-studded card of harness racing at Woodbine are available at the following link: Saturday Woodbine Entries.

Think you know who will win Saturday's Breeders Crown races? Enter the Breeders Crown Fantasy Pool. It's easy to enter, free to play and you could win a $100 gift card for the racetrack of your choice. Click here to enter the contest.