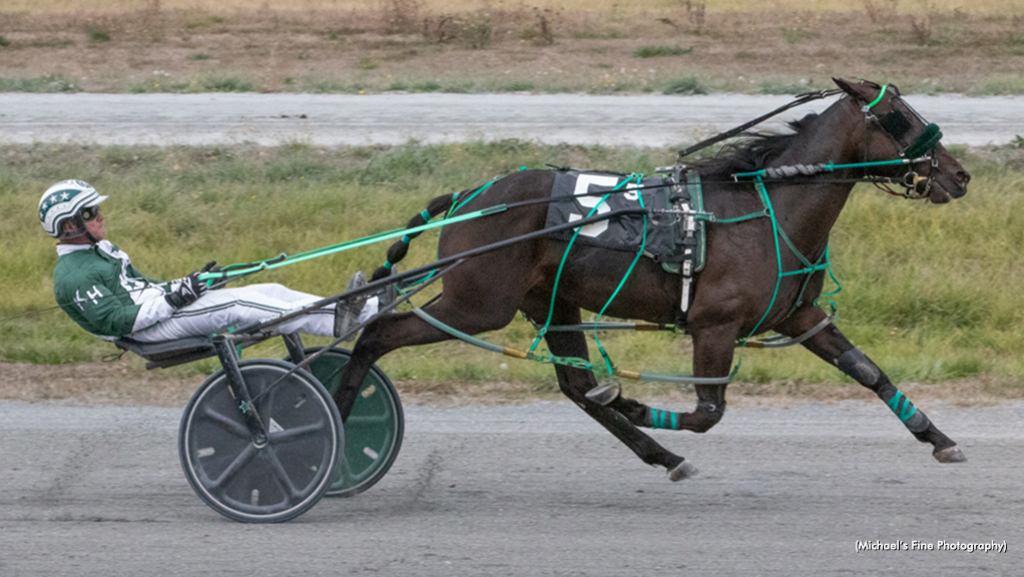 Mickie Mantle (pictured above) earned his third straight victory in the Robert Millbank Memorial Stakes with a 1:55.3 career-best effort in the first of two $15,000 third-leg divisions.

Trained by Chris Lancaster while racing in B.C., Mickie Mantle has won half of his six career starts and $30,598 in purses. Hoerdt shares ownership of the Custard The Dragon-N Y Yankees colt with Fred Gilbert of Brandon, Man.

Shots Fired and driver Dave Kelly won the other colt division in 1:55.4.

Speakdollarncents with Son Of A Beach left together from the middle of the pack with the latter taking a short lead into the turn. Son Of A Beach pressed on past the quarter in :28.1 to clear Speakdollarncents but 6-5 bettors' choice Pop N Like Pez swept up from third to take over as they hit the half in :57.3. As the favourite led to three-quarters in 1:26.3, Kelly sent Shots Fired underway from fifth and took aim in the stretch. He drew clear to win by 2-3/4 lengths while Rilkoff closed on the outside to nab the runner-up honours over Pop N Like Pez.

Shots Fired, who finished fourth in the first two preliminary legs, paid $7.70 to win as the 5-2 second choice.

Custard Or Nothing, the second choice in the betting, set a pace of :28.4, :59.4 and 1:29.4 while uncontested on the lead with Snowpeak sitting second and Side Piece in third. The race formed into the stretch when Side Piece shot from third to overtake Custard Or Nothing in the lane by two lengths while Snowpeak finished evenly in third and Heart Of A Dragon took fourth.

Jim Marino trains and co-owns Side Piece, a daughter of Shadow Play, with breeder J J J Stables. She won her second race from four starts, pushed her bankroll to $14,600 and paid $4.70 to win.

In the co-featured $10,000 Open Pace, Armycaptin Hanover extended his top-class streak to four wins in a row with a 1:53.3 mile as the 2-5 favourite. Trainer-driver Kelly Hoerdt persisted with the six-year-old Captaintreacherous gelding while parked the mile and pressed up the rim against pacesetter Tiempo Hanover past a :26.3 first quarter and through middle fractions of :56.2 and 1:24.4. Armycaptin Hanover overpowered his competition in the stretch to win by a length and nab his 31st win from 100 starts and add to his account now worth $202,301. Hoerdt co-owns the $2.90 winner with Blair Corbeil.